I was so excited to be a part of Fashion Week and go to New York City. I figured I would show up, tour the Design Lab, take a few pictures, and maybe they would let me do something tedious like polish 20 sets of nails before one of the seasoned girls stepped in to do the artwork. (For the record, I would have been perfectly content with that.)

Before my trip I ran into Jan Arnold at Premiere Orlando and she asked if I would like to do her nails. I agreed without hesitation, feeling honored and a little bit shocked, and then super excited. When it comes to art and design, I feel like Jan “gets me” and I get her.

About a week before my trip I was given a schedule that outlined when I was to be in the Design Lab and what fashion shows I got to help out at, etc. It was spaced out, and there was a lot of free time. I don’t do well with idle time, so I was secretly hoping I would be asked to come in and help out on the other days, even if it was just to do boring stuff. A couple of days later, I was asked to be part of their A-team for the week and work full-time in the Design Lab. Of course I said “Yes!” and packed my bags.

My first stop upon arriving to New York was on the third floor in the media room. The other CND techs seemed genuinely excited to have me there. I arrived in the Design Lab ready to do Jan’s nails. Jan was so thrilled to have me there and we shared a very frenzied moment of design concepts, gasps, shrills, photos, sketches, and plans.

I had designed about five looks for her nails and one of the looks was a very anatomical skeleton set including the spine, ribcage, and skull. She saw it and said, “That is so Libertine!” While Shelena Robinson prepped Jan’s nails, Jan asked if I would quickly make a skull nail so they could take it to Libertine. I sat down at a table and used CND products and tools from the other ladies in the lab to quickly make a skull with a moving jaw and a gold tooth. It wasn’t my best work, but before I could take a breath, the girls grabbed it and took it to Libertine with several other nails they had designed for his line.

After that, I started on Jan’s nails. We had such a great time and talked about so many things. I love hearing her tell the story about how CND began and I love when she talks about her dad. A couple hours into Jan’s nails, the ladies returned from Libertine with exciting news: my skull nail was among the nails chosen for the show. Everyone started congratulating me. I looked at Jan and said, “I have a feeling I have no idea the magnitude of what just happened.” After finishing Jan’s nails, I was told I needed to make 22 skulls in about two days.

I decided to get an early start the next day. I came into the Design Lab and it was completely empty. The sun streamed in because of the wall of windows that ran the length of the penthouse; it was almost heavenly. I made myself at home at my nail station, which was a little bit away from everyone else. I almost had my own private room, which I liked because I wouldn’t be distracted. I spent four hours making my skull and perfecting it.

Heather Davis let me use her molding compound to create a mold. It worked brilliantly, and I spent the next 12 hours cranking out skulls. Every couple of hours Kristina Estabrooks and Roxanne Valinoti would come check on me. They were always there to bounce ideas off and help me when I got stuck or couldn’t find something. They kept everything running smoothly. After completing 22 skulls, Jan requested I make some ribcage nails. I made four special ribcage nails then left for the show.

Backstage, they gave me a tool belt and Amanda Fontanarrosa became my mentor. She has done more than 20 Fashion Weeks in various places around the world so I knew I was in good hands. Basically you have to find your model in the midst of complete and utter chaos; then remove whatever the model has on her nails. We would have to squat down under the hairstylist and makeup artist and try not to get stepped on while we worked. We prepared the nails, and then fit and pressed on the nail tips. It wasn’t rocket science, but the atmosphere made the job stressful. I did two or three models with Amanda and was on my own after that.

The most overwhelming moment happened when the models went to line up and get dressed. It was a long room with racks of clothes going all the way down the side wall. There were posters with the models’ names and pictures of the clothes they would be wearing. It was very well-organized, making it easy to find my model and put the finishing touches on the nails.

I looked around and just observed what was happening. Almost every model with skulls on her nails was in front of a camera moving the jaws of the skulls and modeling them. For the first time I was on the other side of my nail art. I was so overwhelmed it brought tears to my eyes. In eight short minutes it was over.  The models came back in a frenzy and ripped the nails off before running to the next show. We walked around the backstage area scanning the models and the floor looking for the nails we had so tirelessly created so CND can put them into archives at their headquarters.

I was surprised when I came in the next morning and Kristina had a task for me. She said she was stuck on one of the designs and wanted to see what I could come up with. She left me there for five minutes to sketch. I hesitantly showed her, and she OK’d the design. I got to work right away. The set took me all day to do, but I was thrilled with them. I started off with a white ribbed base then added some of the elements on accent fingers, including plaid, gold chain, and applique.

I had to leave to go to a VIP dinner with Jan and some other amazing nail artists, but I promised the girls in the lab that I would be back to pull an all-nighter. I figured I had come all this way to experience the Design Lab, I may as well experience it to its fullest. I packed my pajamas and returned after dinner. The girls presented me with a necklace that said “Queen” and an earcuff. It really made me feel like I was part of the team. We worked until 4:30 a.m.

The last show was The Blonds. The atmosphere there was much more loose and relaxed. We also had tons of space. I only had two models to take care of that night. I was able to meet and talk to the owner of Revlon and I was also interviewed by MTV. The night went off without a hitch. The next few days were especially exciting because we started seeing pictures and videos popping up everywhere on the Internet of the nails.

I think as nail artists we tend to become defensive of our work. We are used to having someone critique our nails after the top coat is on, and the person is stuck with them for a couple weeks. In this atmosphere, you really have to let your guard down and trust that you are surrounded by some amazingly talented artists. By making yourself vulnerable and allowing others to critique your work, it’s only going to make it better. I personally struggled with that because it was my first time in that type of atmosphere. If I ever get the opportunity to go back, I will be way more open to critiquing and not just plow through the sets. 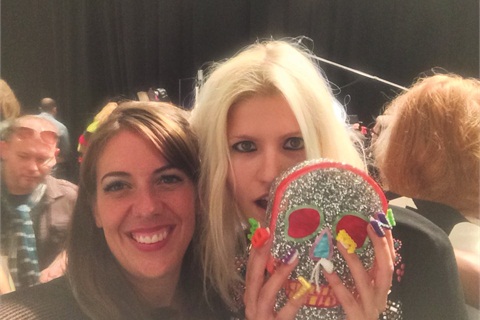 The experience exceeded my expectations. I really did expect to be polishing nails a plain color in preparation and couldn’t believe they actually put me to work. I really felt like I was part of the team.

The new gel-polish line will is vegan and non-toxic and can be used with both LED and UV lights.

How To: Floral Wedding Nails

Inspired by the hot nautical trend of summer 2020, CND launches Nauti Nautical in Vinylux and Shellac.

NAILS Next Top Nail Artist alum take on the #DontRushChallenge.

For the 10th NTNA S.7 challenge sponsored by Wildflowers, contestants were asked to show a mood or emotion through textured nail art. This is Allison Goertzen's entry. See all three entries here.

For the 10th NTNA S.7 challenge sponsored by Wildflowers, contestants were asked to show a mood or emotion through textured nail art. This is Stella Sampson's entry.

For the 10th NTNA S.7 challenge sponsored by Wildflowers, contestants were asked to show a mood or emotion through textured nail art. This is Kadee Brown's entry.

For the ninth NTNA S.7 challenge sponsored by KUPA, contestants were asked to create nail art inspired by one of KUPA's MANIPro Passports. This is Stella Sampson's entry. See all four entries here.

For the ninth NTNA S.7 challenge sponsored by KUPA, contestants were asked to create nail art inspired by one of KUPA's MANIPro Passports. This is Kadee Brown's entry. See all four entries here.

For the ninth NTNA S.7 challenge sponsored by KUPA, contestants were asked to create nail art inspired by one of KUPA's MANIPro Passports. This is Kelsey Waldo's entry. See all four entries here.

For the ninth NTNA S.7 challenge sponsored by KUPA, contestants were asked to create nail art inspired by one of KUPA's MANIPro Passports. This is Allison Goertzen's entry.

For the eighth NTNA S.7 challenge sponsored by Swarovski, contestants were asked to create nail art inspired by a Spring/Summer 2021 trend. This is Kadee Brown's entry. See all five entries here.

For the eighth NTNA S.7 challenge sponsored by Swarovski, contestants were asked to create nail art inspired by a Spring/Summer 2021 trend. This is Kelsey Waldo's entry.