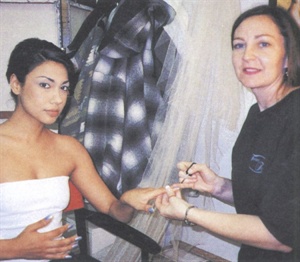 In a letter to the editor last year, Brenda Bollard wrote: “How are cover technicians [for NAILS] chosen? It has always been a dream of mine to do the nails for the cover.” Well, Bollard has what it takes to be a cover technician — superior technical skills — so this year her dream came true.

Bollard’s initiation into the nail industry came 12 years ago when she was urged by her sister, a cosmetologist, to attend a nail class. “When I would tag along with her to the beauty supply store, I felt like a kid in a candy store, yet I couldn’t buy anything because I wasn’t a licensed professional. All of these wonderful products were off limits to me,” remembers Bollard.

After taking the class, she practiced doing nails on family and friends and eventually moved to Chicago, where she met her first nail mentor who had a nails-only salon. Since Illinois didn’t require licensing at the time, Bollard started working for the salon owner to learn the ropes. She also dabbled with working out of her home and renting space at different salons.

Then when Bollard and her husband packed their bags and moved to the country— Texas — Bollard went to nail school (Texas requires a manicurist’s license). “It was tough going to school to learn nails when 1 had been doing them professionally for a while,” she says.

As soon as she could, Bollard opened Bren’s Nails. Since she was the only technician in her area to offer pink-and-whites, Bollard’s business boomed. “When I had more clients than I had time, I realized I needed help,” she says, so she hired nail technicians and eventually moved into a bigger location.

Bollard exercises her nail skills in the competition arena as well. In her early competing days she was the model in a fiberglass competition for veteran competitor Kim Morgan. “I picked Kim’s brain during the competition and she gave me a lot of help and encouragement,” says Bollard. One of the biggest achievements in her nail career to date, she says, was winning the Top Gun competition (a manufactured-sponsored “team” competition) at a show where she was up against some of the industry’s top competitors. And although Bollard has won her share of awards, she says she still learns a little something each time that helps her at the next competition.