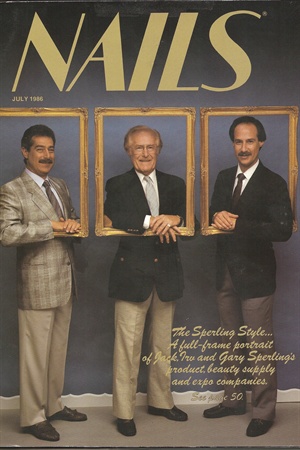 Alpha 9 was founded in 1980 by the Sperling family (brothers Gary and Jack, father Irv). Sold to Styling Technology in 1995, then to American International Industries (AII) in 1997.

In 1966, Jack Sperling opened a beauty supply house and later brought his father Irv out of retirement and into the new family business (the family's manufacturing company name was JDS Manufacturing, which produced the Alpha 9 product line). Shortly thereafter, Gary joined them. The beauty supply house did well, so the family moved into cosmetics, focusing on supplying makeup to movie studios and theatrical groups. In the mid 1970s they moved into the relatively new field of professional nail care products.

In about 1976, the time seemed right for a tradeshow and the first Jack Sperling Nail & Beauty Expo was held with 27 booths in a Howard Johnsons Hotel in Van Nuys, Calif.  In an article in NAILS in 1986, Jack said, "You have to understand that at the time, the manicurist was treated as a second class citizen, largely ignored by beauty supply houses and the beauty industry in particular. There were plenty of shows, but they were ignoring the needs of the manicurists."  Eventually, brother Gary started his own show in Orlando called the Gary Sperling Nail & Beauty Expo.