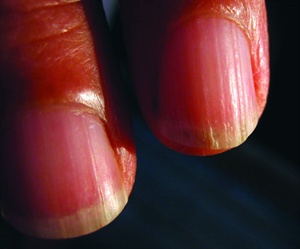 Onychorrhexis refers to split or brittle nails that also have a series of lengthwise ridges; can be caused by injury to the fingers, excessive use of cuticle solvents, nail polish removers, and careless or rough filling.

The appearance of split ends alone is referred to as onychoschisis. However, many times a client will have both ongitudinal ridging and split ends together, making brittle nails a common complaint, says Jorizzo. Many times a cause for split ends can be determined. However, Jorizzo says, many clients want to know a cause for onychorrhexis when often there isn’t one.