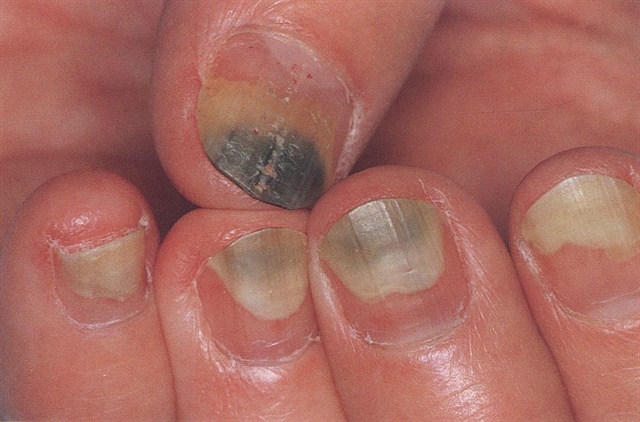 In the medical and scientific world it’s known as pseudomonas. In the salon, it’s more commonly referred to as “greenies.” Whatever the name, it’s an unsightly bacterial infection that makes clients and nail techs see green — literally.

For years, the term “mold” has been used in the nail industry to describe what are most likely pseudomonas bacteria. The green color visible on the nail that’s often mistaken for mold is a  byproduct of the infection and is caused primarily by iron compounds.

This type of bacteria is commonly associated with nails, but it can also settle into other parts of the body, including the eyes. It is common in the environment and sometimes even found in hot tubs, says Phoebe Rich, a clinical associate professor of dermatology at the Oregon Health Sciences University in Portland, Ore.

The risk of pseudomonas can be increased by moisture entrapment. Before a nail infection can occur the surface of the nail plate must be contaminated with bacteria. Once a nail enhancement enters the picture bacteria can become trapped between the natural and artificial nail and grow. Covering the nail plate with an enhancement creates a nearly oxygen-free environment in which these bacteria thrive. They produce a dark green substance — the green color you see visible on the nail.