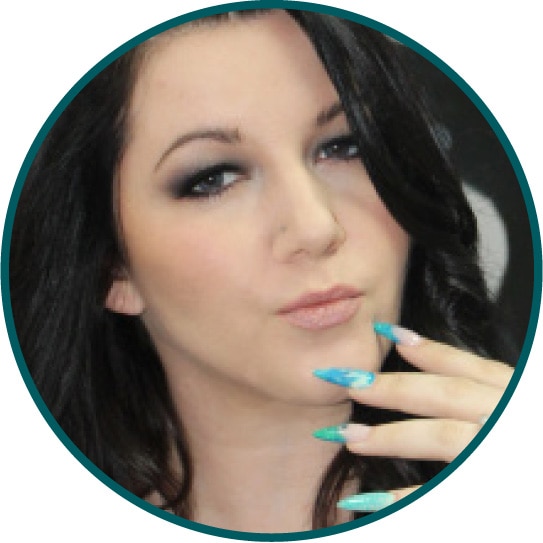 I am originally from Charlotte, N.C., but being that my step-dad was military, I have been to more states than I can count. I have two children, Trinity and Skyler, who are ages 14 and 6. I opened my own nail salon called White Koi Nail Studio. The white or platinum koi fish represents prosperity in business. I built it so that people could have a safe salon to go to that didn’t cost as much as a high end spa. I pride myself on being self-motivated and an overachiever. I am determined to be the best in my field and have the most knowledge. I think what sets me apart is that I am very creative under pressure. I am also diverse, as I have no certain type of style, so there isn’t any style I can’t mimic, or adapt to. I think people will keep voting for me because I will always try to bring something new to the table. I want to make them think “how did she do that?”

Alecia did not complete this week’s challenge and therefore will be eliminated.

I wanted to do New York for this skyline challenge. I am very happy to finally be able to use acrylic for my 3-D design! I used an airbrush with acrylic paint and made a beautiful night sky on a huge sheet of gel. I made tall towers, the new One World Trade Center, and I used clear gel to make the Twin Towers to remember the fallen. I added the Empire State Building and Chrysler Building, and topped the latter with the famous King Kong! I can’t forget Lady Liberty, so I sculpted her out of acrylic on a nail and placed her on a monument that says New York. I added roads of nails leading to her, since New York is known for its crazy traffic. Lady Liberty stands tall in the middle, front, and center because she represents freedom and going forward. I added flowers and water, because water surrounds the island of Manhattan.

Click here to see a step-by-step tutorial for Alecia’s nails.

I wanted to represent Unity in diversity. I went back to my roots and love of the koi fish. We are all unique and I wanted to use different colored koi fish, which represent strength and diversity. I surrounded a lotus flower with them to spell out the word unity. The lotus flower I made is red, which stands for love and compassion. I feel we all need love and compassion to show each and every person, regardless of race, gender, size or weaknesses, to show that we are a unified human race.

Click here to see a video diary about Alecia’s nails.

I was inspired by the Egyptian Theatre, built by Sid Grauman. I have been inspired by Egypt since I was a little girl when my grandparents told me all about their travels there. A special painting they brought back was always the center of our gatherings and family photos. The Egyptian Theatre cost $800,000 to build and took 18 months to construct. It was the venue for the Hollywood premiere of “Robin Hood” starring Douglas Fairbanks, on Wednesday, October 18, 1922. As the film reportedly cost over $1 million to produce, the admission price to the premiere was $5. The original plans for the theatre show a Hispanic theme, but at some point these plans were changed to an Egyptian style. It is probable due to public fascination with the multiple expeditions in the search for the tomb of King Tut by archaeologist Howard Carter. (Carter eventually discovered the tomb on November 4, 1922—just two weeks after the Egyptian Theatre opened.) It sparked a renewed public interest in ancient Egypt, for which Tutankhamun’s burial mask, now in the Cairo Museum, remains the popular symbol.

Click here to see a video diary about Alecia’s nails.

I wanted to do the haute couture nails in a way that defined the meaning of the “haute couture.” It means the art of sewing everything by hand and importing only the finest fabric. I took looks from the runway and made it big and bold, yet classy. I wanted to follow with the element of everything being handmade and made all of the art myself and with the same quality acrylic that I used on my pink and whites. I did not add any crystals so I wouldn’t overpower my craftsmanship.

Click here for a step-by-step tutorial of Alecia’s pink-and-white look.

For this challenge I decided to go with Monopoly. More specifically, I selected the Nintendo version, since Mario Brothers is another one of my favorite childhood memories. Monopoly is a board game that originated in the United States in 1903 as a way to demonstrate several economic principles, particularly those of Henry George. These theories included a single tax and more equitable wealth distribution. Monopoly has been around for generations and continues to be an all-time favorite among young people and adults.

Even though it’s a long game, we pull it out every couple of months for the whole family to play. It’s good for my children because they learn the value of money and what happens when you decide to buy all of the property within the first round. Of course I’m usually the winner, the turtle wins the race!

Click here to see a step-by-step tutorial of how Alecia created these nails.

The first diva I thought about was Beyoncé, because Beyoncé is a diva of our time. But then I thought about RuPaul, the classic diva who has prevailed through many years. What could be better than to choose the one person who has been the most flamboyant and charismatic, and every definition of what a diva should be, over the last few generations? RuPaul is beautiful and over-the-top. He has made a name for himself through performance, song, movies and even has his own show — “RuPaul’s Drag Race” that showcases even more divas in the making. He is the perfect diva for my Dashing Diva inspiration. I used his many gold and silver dresses as inspiration, and executed the look with a clean, yet over the top luxe feel.

Click here to see a video tutorial for how Alecia created these nails.