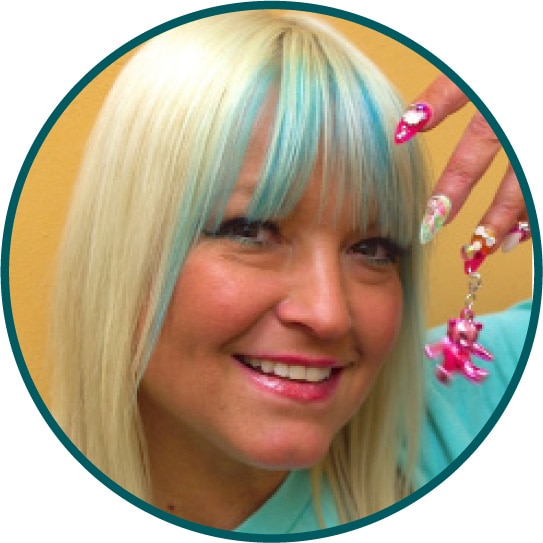 I create nail art unique to your own style. You dream it, I draw it. I have a very distracting addiction to shiny things. My clients are astounded by my extensive sparkle and glitter collection and vast display of the crystals and bling that can be applied to nails. I love luring new clients into the nail art world by sprinkling some holographic silver sparkles over their nails and ask “Do you love them?”  They always answer with an enthusiastic “Oh yes I do!”

I wanted to create something that represents unity with a combination of elements that express a visual harmony with an organic fluidity that blends into a single unit. There are many ways to represent unity. Unity is harmony in a group. Unity is doing something while working together to fulfill a common goal. Unity makes big tasks seem easy. Unity makes everyone feel like family. Through us, we gain strength.  Through strength we gain power.  Through power we gain victory, through victory our ties are stronger and nothing can break our unity. I chose to create a unity candle that symbolizes the Olympic torch carried from nation to nation representing a unity that ties us together, creating strength. And strength is stronger in numbers.

Click here to see a video diary about Victoria’s nails.

Pink’s Hot Dog Stand has been a Hollywood legend since 1939.  At the corner of Melrose on La Brea, Pink’s is ranked 40 out of the 388 restaurants in West Hollywood.  Back in the day, Paul and Betty Pink (no relation to Orly’s Jeff Pink) sold hot dogs from a push cart on the street for 10 cents. Now over 2,000 of them are served every day at this iconic establishment. Rich and poor, club kids, street rats, celebrities and celeb-wannabes alike all make the pilgrimage for their chili dogs and institutional seasoned fries. There are over 35 varieties of specialty dogs, many of which are adorably out-of-touch and named for underwhelming celebrities. The heartburn-inducing chili dogs are craved by even the most health-conscious Angelenos. Thousands of reviews tell stories of how the fluorescent lights and loud pink, white, and red color scheme act as a beacon through the surrounding darkness of Hollywood at night.  While the lines can be unforgiving at most times, people are generally in a good mood.  Waiting 45 minutes for a Rosie O’Donnell Long Island hot dog gives you plenty of time to get to know the people around you who made this journey with you, and take selfies to enhance your super awesome daily check-in.  So the next time you’re in Hollywood and you love dogs, think Pink’s and tell them Victoria sent you!

Click here to view a video diary about Victoria’s nails.

I was first inspired for this design by Ashley Craig’s “leafy” feathered Sphinx and Amanda Fontanarrosa’s “Wing Span Tip” creations for this week’s The Blonds Fashion Week show in New York City.  Their winged looks were dusted with a soft gold pigment that gave the illusion of being quite heavy, when in fact they were actually very light in weight.  When I see a typical pink-and-white set of nails, I see a blank canvas with clean lines yet there is sometimes a bulkiness about them that looks heavy. Feathers are the haute couture fashion for every species of the aviary world. They are epidermal growths that form a distinctive outer covering, or plumage, on birds. They are considered the most complex structures found in vertebrates.  Feathers consist of a hard tubular section attached to the body and tapering into thinner, stemlike portions bearing a series of barbed appendages. Although feathers cover most parts of the body of birds, they grow only from certain well-defined tracts on the skin. Their “coats” aid in flight, and provide thermal insulation and waterproofing. In addition, coloration helps in communication and protection. My pink-and-white couture set resembles feathery wings with strong “bones” and have a light and airy feel even after being embellished.

I always loved the Candy Land I grew up with.  No real strategy, just fun play to get to all the yummy landmarks. The iconic board game loved by millions of girls and boys has been adapted for each generation since 1940. There have been four versions created over the years and the game has been updated a whopping 13 times.  There are debates over whether the updated versions of the characters over time may have had some influence over childhood obesity compared to the “wholesome” board from the earlier years.  The original game did not have any characters to influence your sweet journey. Candy Land brings me back to a time when technology was in its infancy. Playing outside, riding bikes, drinking water from the hose while visions of sugarplums danced in our heads is the Candy Land I remember and still love today.

Click here to see a step-by-step tutorial of how Victoria created these nails.

Diva describes a person who exudes great style and personality with a lot of confidence. Divas express their own taste and do not let others influence who they are or want to be. A diva is a person (most often a female) who defines her own journey and destiny, and is not ashamed to be herself at all times. A diva is a woman with a purpose.

My favorite diva is Holly Golightly from the classic novel and film, “Breakfast at Tiffany’s.”  Holly possesses a strong, fashionable, and classic style that exudes a freshness even after more than 50 years. She has a witty, carefree attitude that makes her hustler demeanor seem so acceptable.  She loves to belt out tunes from “Oklahoma” and is an independent powerhouse that strives to get the best out of life. I chose to emphasize Holly’s love for Tiffany’s and a few of her favorite things, to create a set of nails that mimics jewelry on her fingertips while adding touches of her iconic style.

(Fun Fact … there is a real Holly Golightly!  She’s a British singer-songwriter. Her mother named her after the protagonist in Truman Capote’s “Breakfast at Tiffany’s.” Her musical style ranges from garage rock to R & B.)

Click here to see a video tutorial of how Victoria created these nails.