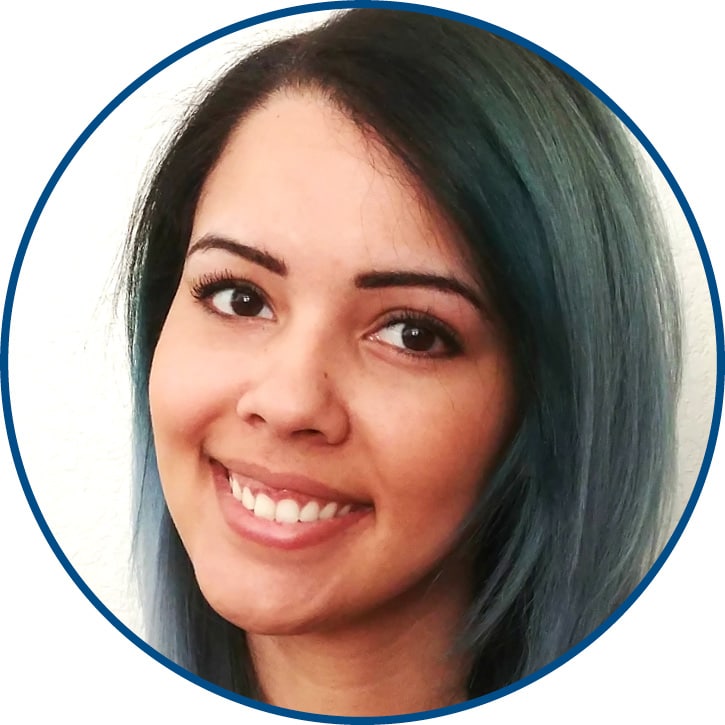 If you are looking for a trendy manicure then look no further! Ashton is not your average nail tech. She specializes in a large variety of nail art. Whether it’s chrome, 3-D, or bling, Ashton is your girl. However her detailed hand-painting is truly what sets her apart. Ashton’s creative eye and love for asymmetrical balance allows her to turn nails into works of art. She has been a licensed nail tech for eight years, is a self-taught artist and she is currently working in Las Vegas. Her nail art has been featured in various magazines as well as in the tourist guidebook 100 Things To Do In Las Vegas Before You Die. Ashton pours her soul into every set of nails, and it certainly comes through in her work. 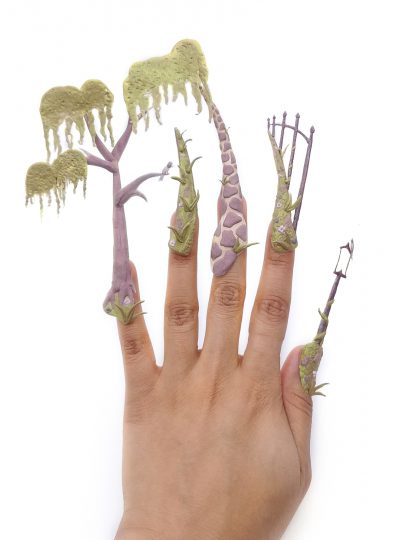 My interpretation of avant garde is extreme experimental ideas that start trends. So I thought to myself, if I could make one thing possible in the nail world, what would that be? The answer I came up with was eliminating the grow out lines to give clients a longer-lasting manicure. So to do this, I extended the design off the back end of the nail, giving the wearer a longer time frame before the growth becomes visible. To also play off the avant garde theme, I decided that I didn’t want to use any of the standard shapes. I wanted the art to create the shapes. The garden aspect of the theme was very exciting for me because my boyfriend and I just closed on our brand new house, so landscaping has been a constant thing on my mind lately. I’m so excited that we are going to get grass, because the thing I have missed the most since moving to Las Vegas is greenery. So I decided to incorporate a lot of green into my design. Because it’s spring time, I wanted to keep the flowers to a minimum, but have just enough to create pops of color like when flowers first start to bloom. I wanted to create a green and vintage-like garden scene and decided the best way to do this would be with perspective art. By placing larger and wider elements along the bottom of the design, it makes things appear as though they are closer to the viewer. 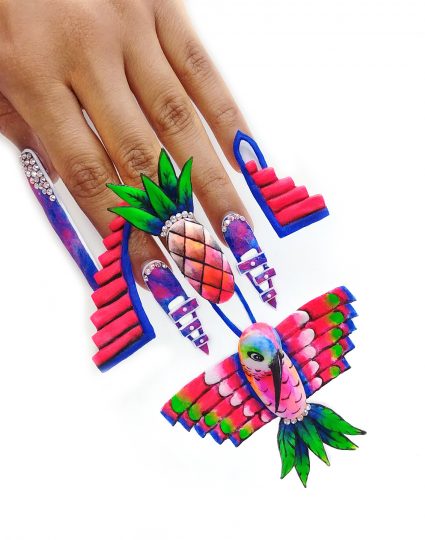 I was inspired by many Salvador Dalí paintings for this challenge, but his 1937 painting titled Swans Reflecting Elephants was my main source of inspiration. The way the reflections looks like something else entirely is so bizarre and creative that I decided to create my own version.

Because I did a Dalí set of nails in a previous challenge, I decided to make this set more personal. This challenge states our artwork should be Surrealist in nature, and I would define surreal as dreamlike. I researched dream symbols and their meanings before sketching out my design. I chose symbols that represent the confidence I have gained from this competition, and the hard work that has gone into it. Hummingbirds’ quick movements are symbolic of working quickly to accomplish your goals, and are also an omen that good luck is coming to you soon. Pineapples symbolize feelings of self-confidence from success. Stairs symbolize progress towards your goals, and affirm that you have put in the work to achieve success. So instead of Swans Reflecting Elephants I created the hummingbird so that the wings reflect the shape of the stairs and the body reflects the pineapple.

The drawer nails were inspired by Venus de Milo with Drawers. The broken up layout was inspired by Dematerialization Near the Nose of Nero. The disappearing stairs were inspired by the portals Dalí incorporates into his artwork. Salvador Dalí is by far my favorite artist, and I am thrilled I have made it to this challenge. 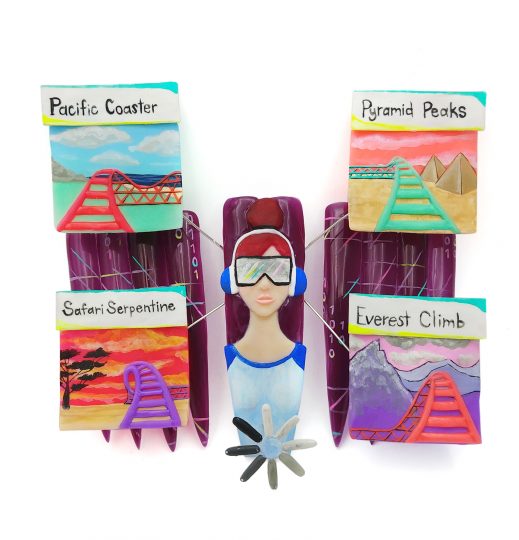 My little brother recently introduced me to virtual reality video games, and I was amazed! So for this challenge I decided to play off of the product name and create a 4D/virtual reality theme park. I combined my love for travel and roller coasters, and created my own rides from different parts of the world. I wanted to show what this girl is seeing through the 4D goggles, so I placed the menu of rides out in front of her. I also made the roller coasters so that you are looking at them from the point-of-view of the rider, because that is what makes virtual reality so realistic. For the background, I painted grids and binary code to represent the internet and technology. For my movable piece I added the “buffering” symbol which spins to make it look like the game is loading. 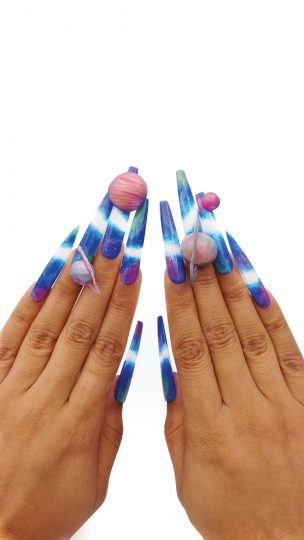 This week I chose to create a negative space version of one of my favorite designs, galaxy nails! Because we weren’t given black or white I thought it would be a fun challenge to paint this design without the standard colors I would usually rely on. I sculpted 3-D planets using Bio Seaweed Clear Builder Gel. I originally planned to sculpt all of the planets but then realized it would clutter the nails and take away from the negative space aspect. I chose to use negative space to portray a wormhole connecting one end of the galaxy to the other. I wove it through the center of the nails to add an “airy” feel to the design and to add implied distance between the planets. I also liked the idea of having the tips of the nails look as though they are floating through space. 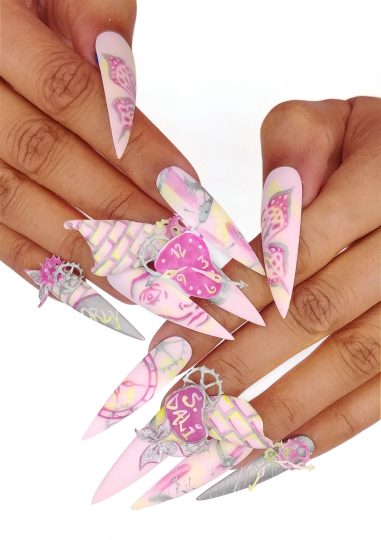 When I hear the term “street art” I instantly think of stencil art and graffiti tags. I decided to combine these concepts with my favorite artist, Salvador Dali. If he were a street artist what would his work look like? In this challenge we were only allowed to use pastel colors, which worked out well for me because Dali’s palettes are generally in the pastel range. He is well known for his melting clock paintings and use of butterflies so I incorporated these elements into my nail design. I “tagged” two of the nails, one with his name and one with Orly, our sponsor this week. I then added stencil-like 3-D elements and hand painted clock gears, his portrait, and butterflies. To tie in the graffiti elements I also added splatter painting and a brick wall pattern.

For this “Heartbreaker” challenge I chose the tragic love story of the Taj Mahal. It was common for Mughal emperors to have arranged marriages and many wives. While Shah Jahan had many, none were cherished more than his wife Mumtaz Mahal. He fell in love with her the first time their eyes met as children, and was able to marry her years later. Their marraige was full with support, deep affection, and intimacy. She gave him many children, but then died due to complications giving birth to their 14th child. On her deathbed he promised to build her the most beautiful mausoleum the world will ever see. Six months later he laid the foundation. He was forever heartbroken, but fully devoted to preserve his love and the beauty of Mumtaz Mahal. Over two decades later the Taj Mahal was built, and they both are now laid to rest there.

To tell their story, I chose to paint a mural with an overall look of late 16th century Indian artwork. I painted their portraits with him looking at her, taking in her beauty, and dressed them to coordinate to show their inseparability. The main entryway to the Taj Mahal is inscribed with passages from the Quran. Because birds are mentioned several times in the Quran I painted the background with an abstract feather pattern to reference this religious text. And of course, I had to include the Taj Mahal, as it’s the end of their story. Fun fact: the subtle variations in the marble of the Taj Mahal cause it to appear to change colors based on the lighting in the sky. 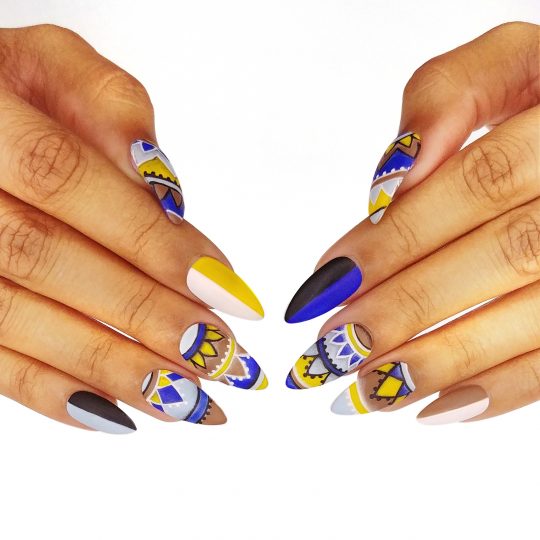 I was inspired by Yin and Yang and chose to portray positives and negatives and the necessary balance between the two. It took me a while to decide the best way to go about this because positives and negatives aren’t really something you can see. I found my solution when I thought of photography and film negatives and how all the colors are inverted. So, I decided to paint each hand to be an exact negative/inverted version of the other. To chose my color scheme, I organized the gel-polishes LeChat gave us into pairs of exact opposites. From there, I chose colors that would give my design a bohemian vibe. I then painted mandalas and two-toned nails to symbolize the balance and to show my use of color. 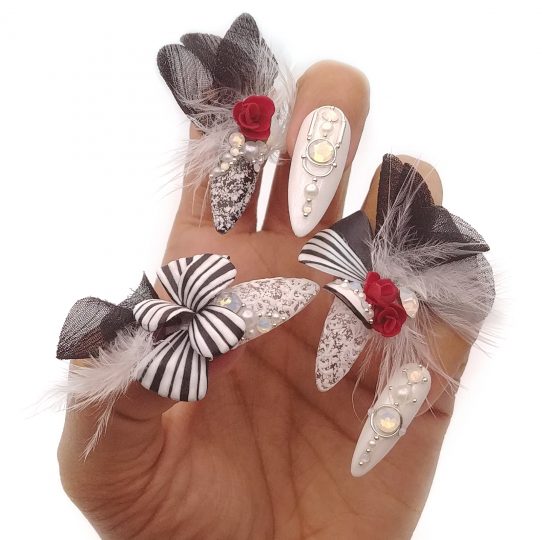 After receiving this Vintage Couture challenge from Akzentz, it took me no time at all to decide to reference my favorite outfits from the movie My Fair Lady. I chose to recreate the iconic hat worn by Audrey Hepburn in the horse race scene, and loved the idea of having my nail wear a huge hat! To fully reference this outfit I also recreated the bow on her dress. I painted the base of these nails with lace gel, and used a sugaring technique over a handpainted lace pattern. I kept this pattern simple to not detract from the hat and bow, but to be just enough to add texture. I then added a black contrasting nail to be slightly less exquisite and to represent everyone else around her during this scene of the movie. I also really love the gown which she wears to the embassy ball. It’s sleek, sparkly, and extremely elegant so I chose to create nails that could be worn with this gown rather than recreate it. I used the silver pearlescent chrome over white to add the extra shine, and then neatly embellished these nails with Swarovski crystals, pearls, and Japanese studs/beads. To tie the whole set together, I embellished the other nails with these same material. 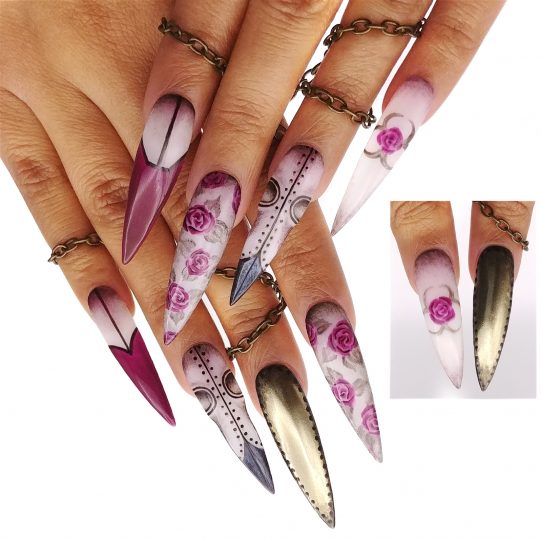 I was drawn to Libertine’s bird skull nails right away, and because of all the floral prints and pill capsule nails, I decided to base my set on plague doctors. During the Bubonic plague, which was believed to be an airborne disease, doctors wore bird-like masks and filled the beak with herbs and flowers as a preventative measure to keep them from breathing in the “bad air.” I painted the plague doctor’s masks and added floral nails to show how the masks were used.

Like armor, the plague doctor’s outfits were designed to protect them from many elements, so I added distressed chrome nails to represent that. These outfits have now been adapted into biocontainment/ hazmat suits so I also incorporated the modern biohazard symbol into this set. Because France was one of the countries hit the hardest during the bubonic plague, I decided to add some French manicure nails into my design. Because this is also a challenge pertaining to fashion week, I chose to shape my smile lines to reflect standard necklines from the mediaeval period. To decorate the fingers I used my favorite chain accessories. I chose this to complement the chains on the bird skull nails, and kept them to a minimum to not detract from the nail design.

Click here to see a video diary of Ashton’s nails.