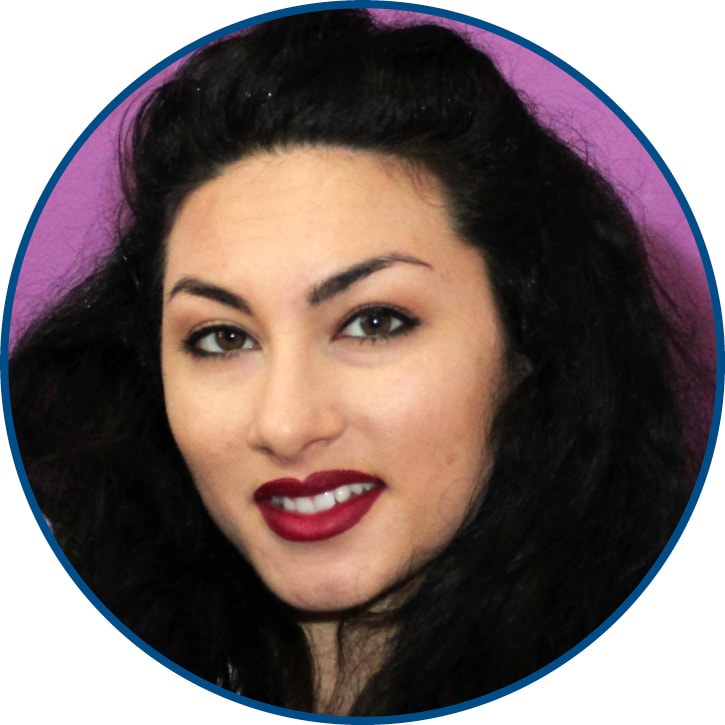 I really love art! I like drawing and painting, but I am in love with nail art. I have patience and I won’t stop until I create on nails exactly what is in my imagination. I love handpainting nail art with a lot of details and I don’t like using stamps and stickers. Also, I like creating extreme fantasy nails, but not on my clients hands. It’s amazing what you can create with liquid and powder. I feel lucky that I can create everything  that comes up to my mind with nail products. It’s so nice to feel proud about yourself every time  you finish a set of nails and you don’t believe that you actually made it. As I said before, I have patience. I am passionate with nail art and this is a big opportunity to push myself and take it to the next level! That is what will make people vote for me. I can’t wait for the challenges. 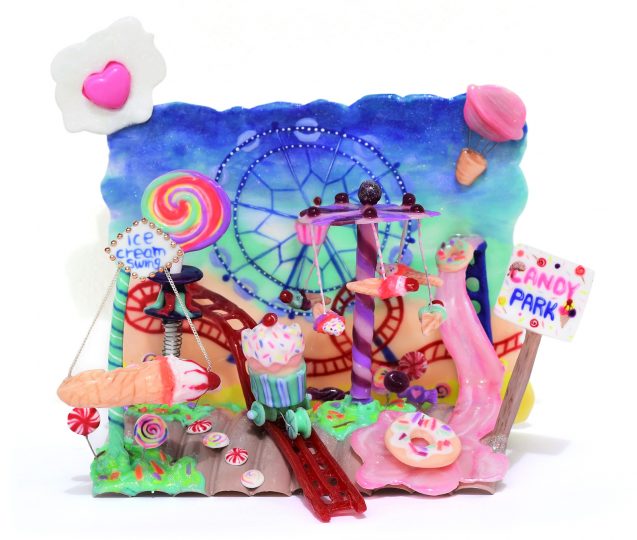 This week our challenge was to create a theme park on 10 nail tips, using multidimensional sculpting as well as hand painting. We had to use 4D Gel and have at least one moveable component to make this park come alive. When I saw the colors, I had the inspiration to make a candy park. The colors are so sweet, so it matched perfectly with my idea. I wanted to make all my rides moveable to make it as alive as possible. I made a cupcake roller coaster, an ice cream swing, an ice cream ride that spins around, a lollipop tower, and a candy gum slide with a spinning  inflatable donut. I also had the idea to use a system with lights and music and add it in my piece to make it look more alive. I made a background with 4D gel and painted it with gel-polish to give depth to my park. I also made a hot air balloon and placed magnets to make it move on the background. I made a lot of candies and added  them to my piece to make a path. I used some glitter and some studs to make the piece more shiny.  Everything is made with 4D gel by Gel ll. I am so excited by this product and learned a lot from this challenge. Have a great day in my Candy Park! 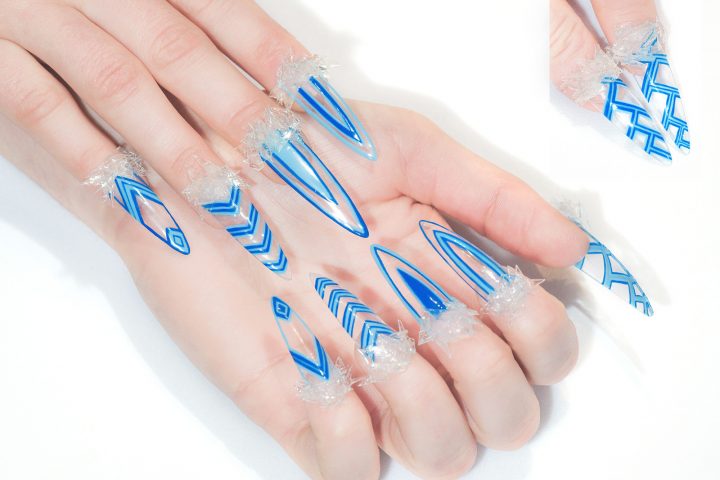 This week our challenge was to create a negative space design on two hands with a lot of space to breathe. When I see clear nails or negative space designs on nails, it reminds me of glass, so that’s how I had the idea to make broken glass. I chose only two colors to give a negative space effect with line art, creating five designs and putting the colors upside down on the other hand. From the word “airy” I decided to use blue shades (Yellowknife and Toronto) to complete my set.

Click here to see a video diary for this set. 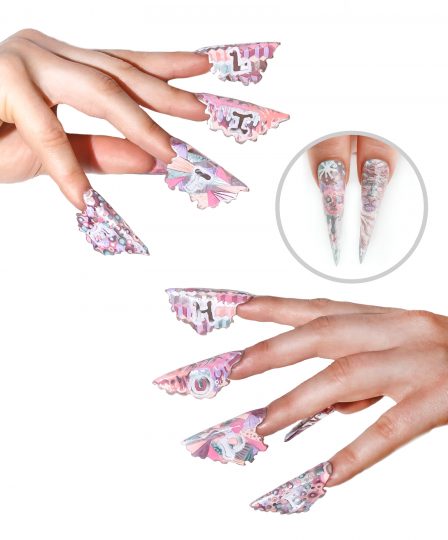 I love graffiti and was inspired by it this week. The street artists usually deliver a message with their art so I decided to deliver my own message with this set of nails. I decided to play with the shape of the nails and make them look like spilled paint. I created different designs on the nails with pastel colors. On the two thumbs I painted a cat and a tiger. I believe that everyone has a strong side but sometimes we forget that and we become weak against our problems. The message that I want to deliver in this set of nails is that we always need to be strong and have hope in our life. That is why one hand says the word “life” and the other “hope.” A cat acts like a tiger when she is in danger so she brings out her strong side against her fears. I used only regular polish for this set. 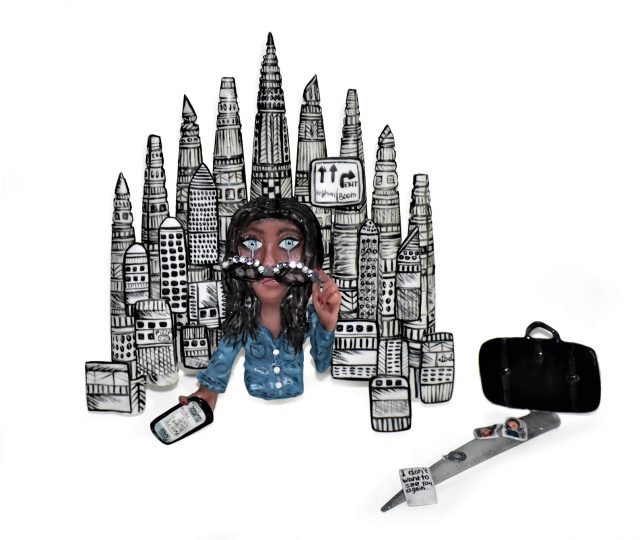 I don’t have a bad love story in my personal life so far and also didn’t want to create a story that exists like Romeo and Juliet. I decided to make up my own story. There is a woman who is engaged and her fiancé texts her a message telling her that he will be late because he is at work. While she is walking alone in Times Square she sees him in front of her, kissing another woman. She goes back to their house and makes the decision to be strong and keep going on with her life, with no lies. She leaves him a letter that says that she doesn’t want to see him again. No one deserves to live a life with lies. That is the message I wanted to deliver with my nails this week. I usually make my 3-D pieces with acrylic, but this time I could only use ibd gel and it’s the first time I created a face with gel. I learned a lot from this challenge!

Click here to watch a video diary of these nails. 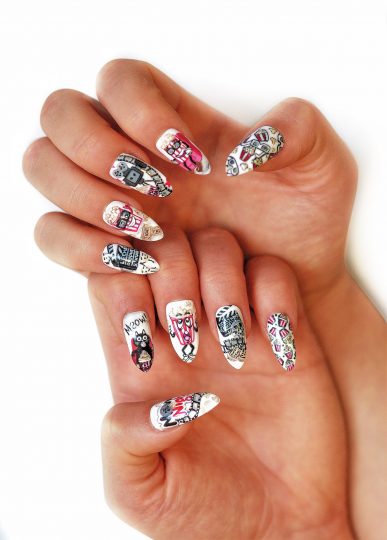 My inspiration in this challenge was movies and popcorn. I love watching movies and always eat popcorn, so for me this is the perfect match. Some of the nails have film, cameras, and movie clapboards ,and others have popcorn all over. I always like to hide our week’s sponsor in the set of nails so this time I wrote LeChat production on my movie clapboards.

Click here to watch a video tutorial for these nails. 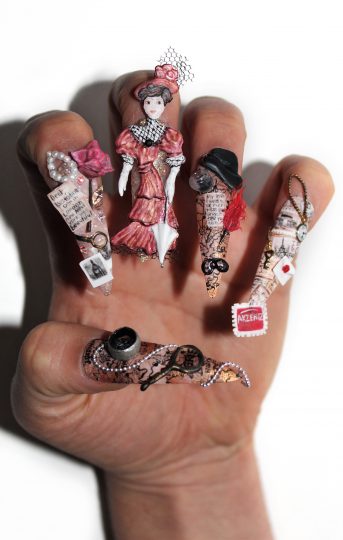 My inspiration is from the Edwardian period. The Edwardian period of British history covers the brief reign of King Edward VII, 1901 to 1910, and is sometimes extended in both directions to capture long-term trends from the 1890s to the First World War. The death of Queen Victoria in January 1901 marked the end of the Victorian era. The new king, Edward VII, was already the leader of a fashionable elite that set a style influenced by the art and fashions of continental Europe. The Edwardian period was a leisurely time when women wore hats, dresses, were holding umbrellas, and wearing pearls. They wore very tight corsets and long skirts or dresses. The men wore hats and glasses, had old watch fobs for accessories, and were traveling a lot. My nails are based in that fashion and period. My lady is waiting for her man and she reads the love letters that he sends her. That period was the time which brought on the great loves and the only way to contact was with letters. These love letters were kept until the day they died. They were tied together with a ribbon and put in a trunk. 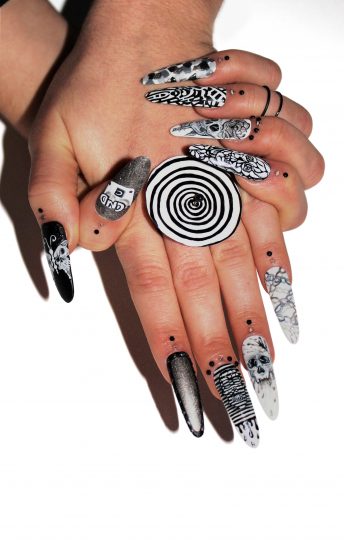 My inspiration from CND’s nails was to bring a rock style to the nails. I really like dark colors, so when I saw the silver nails I was inspired. I was trying to understand if the black design was with crystals or a second nail tip and it kind of looked like an illusion in my eyes, so the idea to paint some illusion designs in my set came to my mind. Some of the nails are hiding skulls, and one of the nails is hiding a number 5 because we are in NTNA season 5. I also painted two skulls one of which is hiding a woman and the other a rose. I made a CND nail because this week is sponsored by CND, and the other nails also have a rock style. For the decoration of my fingers, I made a ring with gel which spins around and also glued some black crystals and cone studs to look like piercings.

Click here to see a video diary of Kostadina’s nails.