For Season 5’s first Last Chance Design Lab challenge sponsored by CND, Jennifer Wirth and Liza Waitzman will battle it out one-on-one to see who has a chance of staying in the competition. CND’s Jan Arnold will select her favorite look Friday and you’ll find out who will remain for at least one more week.

Since Liza packed her paintbrushes after the Vintage Couture challenge, this week’s Last Chance challenge is loosely related.

Nail of the Future: Create a futuristic fashion piece using any mediums. 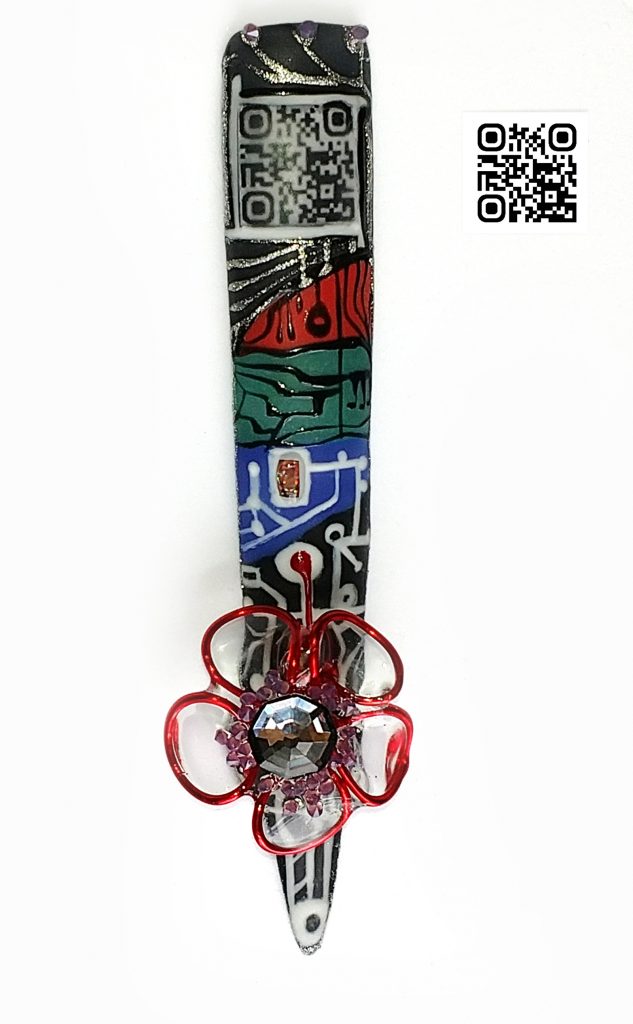 Technology like QR coding make the nail tip a touch stylus. Touch sensors on the surface of the nail can do any number of actions on devices via Bluetooth. A thin “Bio Wearable” film is covering the entire nail and the color blocked panels on the nail are programmed to change color and are connected through heat sensors via built in “bio sensors” at the cuticle’s edge.

I used a piece of holographic foil in the center depicting the solar battery powering the nail. I used all gel-polish for the colors and top coats in matte and shiny. The flower is a functioning micro 3-D holographic projector for viewing pictures or web media suspended in the air above the nail, also serving as a camera, phone, and panic button. I used craft wire and gel to make the flower and a crystal simulates the lens for the projector. I printed the QR code on paper then encapsulated it in top coat applying it with gel base to the nail. This takes the saying, “your nails are your best advertising” to the future! Your QR code directs people to your website, phone number, or social media pages. Scan the code on the picture for a surprise! This nail says, “I am wired to the future” and will attract the tech savvy client to you. 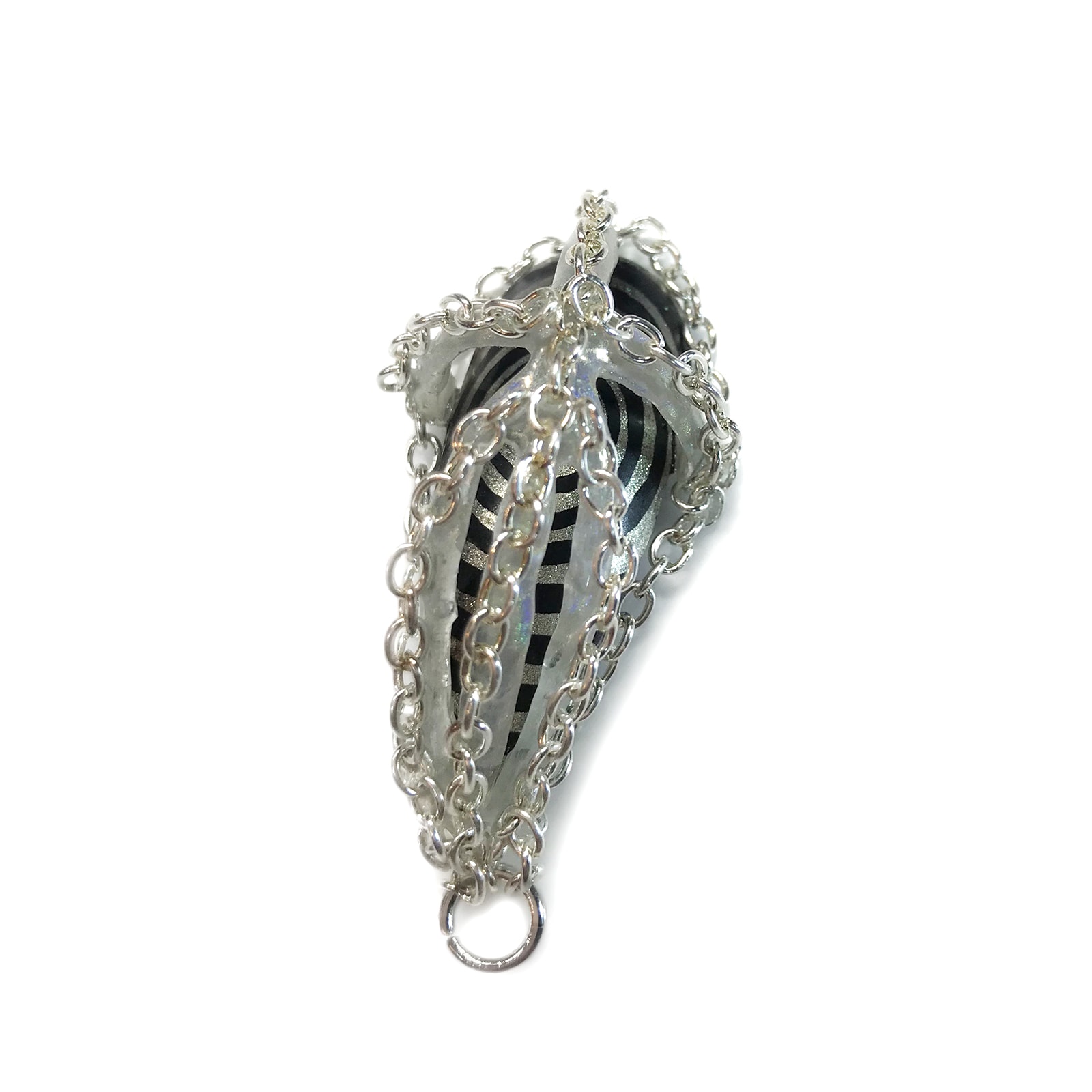 For this challenge, I got inspiration from “futuristic movies” of the past.  Think, The Fifth Element meets Mad Max!  I wanted something edgy and punk with a little weird. The dress from the female character in The Fifth Element really spoke to me and I wanted my nail to vibe off her dress in a sense but with a darker feel. For the base of the nail I used  mirror chrome and did some line work to make a sort of optical illusion. I used a hard gel to make a dome-frame around the nail and I covered the dome with hologram chrome. I then added a chain to the dome and to frame the nail itself. I added a jump hook to the tip to connect the chains and also wanted the option of adding a chain for a full set of nails to connect or added jewelry pieces for that runway look. 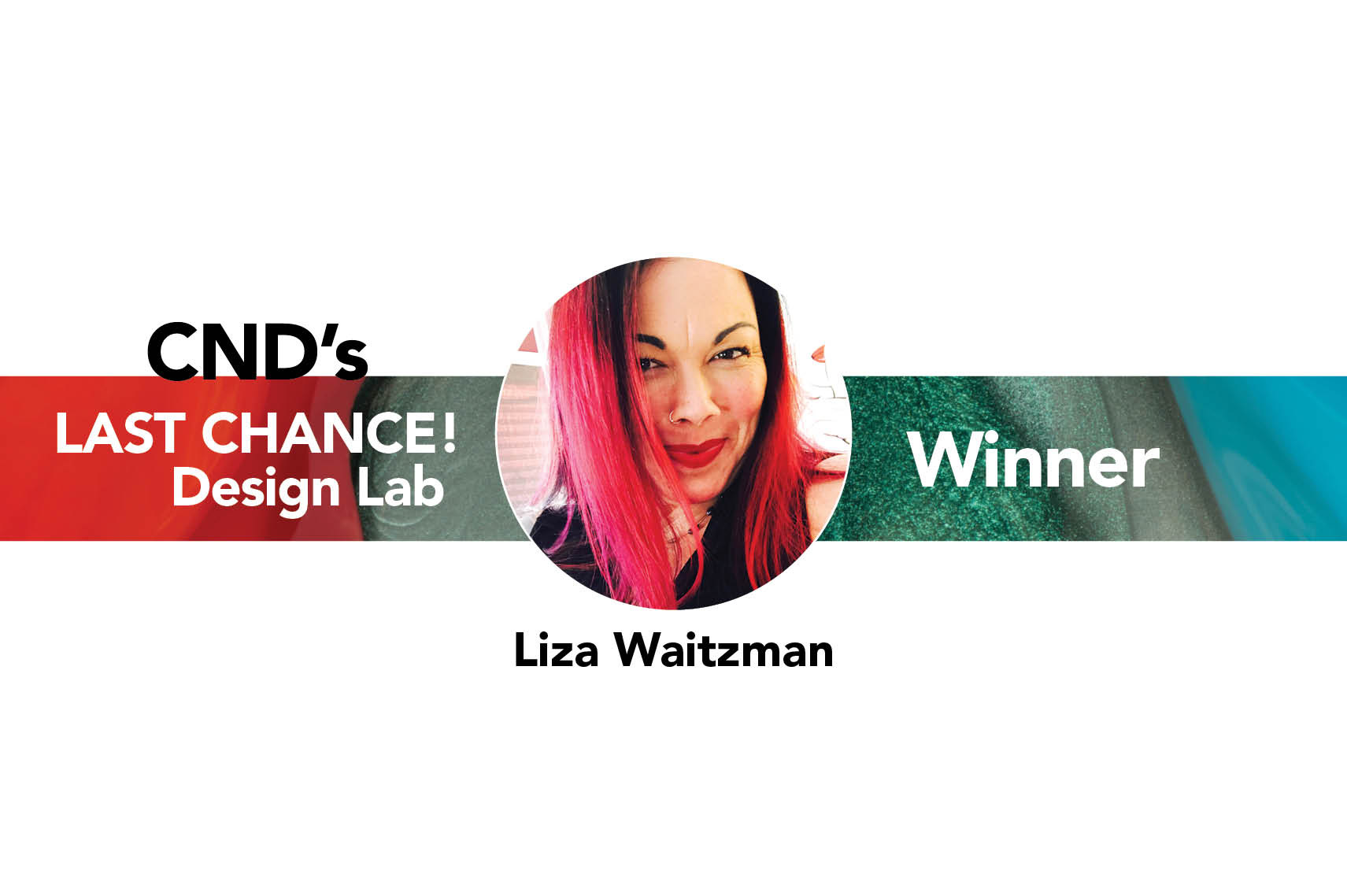 Congratulations to Liza Waitzman for winning the first Last Chance Design Lab challenge of Season 5! Liza went up against Jennifer Wirth to show us a futuristic nail. CND’s Jan Arnold chose the winner.

Jan said, “I love Liza’s nail because it’s innovative, unique, and high-fashion. I vote for Liza because I know I would wear this nail!”

This means Liza will move on to compete against the next eliminated contestant. Find out tomorrow who that will be.