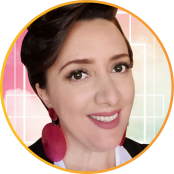 I’m a 41 year old scatterbrainy, animal loving, nail tech! My house is like Noah’s Ark with all the animals I home! I love tinkering in my shed, I loathe exercising, I love beautiful spring days and Halloween,  fire-pit nights, and food…..lots of it! I’ve been a nail tech for over 21 years now and I love how much this industry has changed over the years. I’m always up for new trends and definitely love a challenge!  I lived overseas for 3.5 years and in that time I also owned my own nail business there too. I’m hoping to outdo myself in this competition and push boundaries like I’ve never pushed before, and can’t wait for this journey to begin! Let’s do this! 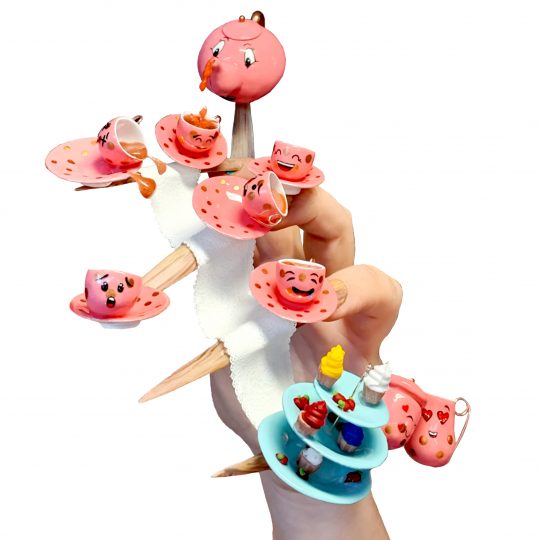 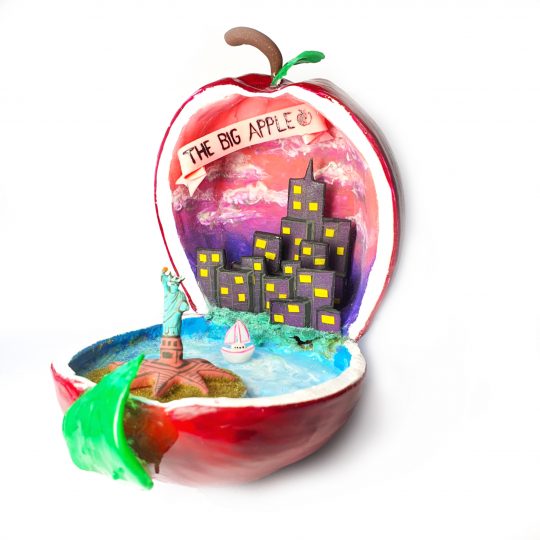 This week, Gel II asked us to bring The Big Apple to life on 10 tips using their New York collection. I chose to literally bring to life a big apple,  but when you opened it in half, you would see New York city at night within the core of the apple. Initially I wanted to do the typical I❤NY and yellow taxi cabs with lots of shopping bags, but I was worried quite a few of us would be “wearing the same prom dress” as Elaine has mentioned in the past. So with that in mind, I took a bit of a risk to hide my 10 tips inside the structure of the 3-D apple I was to create, and then build NYC inside the apple! Given that the space was tight inside the apple, it proved challenging to actually create small enough pieces that were out of the way enough to actually allow me to fully close the apple, yet look like a city once you opened it up. 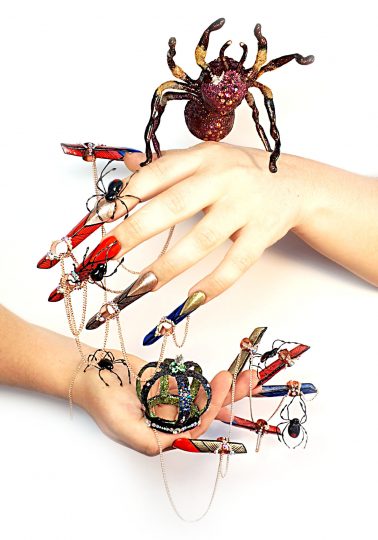 I chose Billie Eilish because I love that she doesn’t conform to what society considers “normal”. She colours her hair whatever outrageous colour she likes, her clothes are casual and baggy, her music is delicate yet dark, very dark. That would be because she suffers from mental illness, and even so, she has managed to do what she loves. There’s an important message she brings to the youth of today, and that is, even with mental illness, you’re still valid and you can achieve anything you want!

With the nails, I wanted to do a French set that would transgress against what everyone sees as the standard (i.e pink and whites) and rather use full colour to create a French look. The next thing I wanted to incorporate in this set was the element of mental illness and how it plagues today’s youth, and society in general. The metal rings which I added to the center of a perfect French nail, represent the rabbit hole which is mental illness. Once you fall through, you free fall into a web of disturbing thoughts that just won’t let you be. The web is represented by the chains that I attached to the nails and through the “rabbit hole”. The crown I created using builder in a bottle is representing Billie herself, and even though she is in the midst of her mental illness, she still achieves her life long dream of winning a Grammy, five to be exact, which is represented by the five little spiders I created. The big mumma spider is a recreation of Billie’s pet tarantula, she loves spiders and doesn’t fear them at all, and I created the spider in an “attack” position because that’s Billie through and through. She’s a fighter, and that’s a great message she’s sending to the world.

I chose “I’m a Little Teapot” for Ugly Duckling’s nursery rhyme challenge. The tea set I sculpted is animated, and each little character is a representation of a different aspect of my personality. Let’s start from the top and work our way down. First up is the star of the show, the teapot. This teapot represents my nurturing side, as any mother has toward her children, but life didn’t have children in my destiny, so I nurture the people around me instead. Always giving of myself, as momma teapot is always pouring out tea, with a smile, might I add. Directly under her is a receiving teacup. This represents me being happy while catching up on the latest celebrity gossip. As you can see in the teacup’s expression, she’s quite content. Next up on the same nail is the clumsy teacup tripping over her own shadow. I don’t know what it is, but I always find myself tripping over nothing and toppling over. On the middle finger we have two teacups witnessing the disaster about to spill on them and trying to flee as fast as they can so they don’t get burnt by the scalding tea. Same as me, my anxiety gives me the flight response more than I care to admit, and you’ll find me heading for the hills. In the background of those two frightened  teacups, is one who’s witnessing this “catastrophe” and finds it ever so hilarious. That’s me, watching YouTube videos of either pranks, or well-timed accidents that happen to everyday people and I find it hilarious. Next up is the dessert-loving teacup. At the mere sight of desserts, she drools like I do and I just fantasise about eating all the cupcakes in the world. And in the background we have the love birds: the sugar bowl and milk jug. These two represent me falling in love with the wrong person every. damn. time. Sugar isn’t good for you, as have been all my choices in partners thus far, but it doesn’t stop me from falling hard. 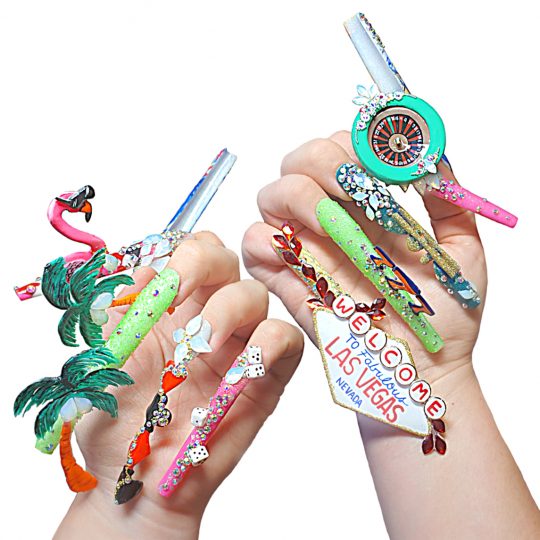 Vegas is flashy, loud and apparently never gives your secrets away! I’ve never been to Vegas, but from what I’ve seen in movies, it’s very, very extra, so of course I’m going to translate that to my nails! I know Vegas for gambling and the Flamingo Hotel (which I love because it’s pink!) so I used Glitz Accessories and Such 4d gel to sculpt a different gambling related art piece for most nails. My favorite one is the roulette, which actually spins, and close second is the playing card suits nail. Any painted detail I used Glitz Accessories and Such gel paint. And I secured Glitz crystals using their Glitz Glue Gel 3 step system. I tried to make these nails as loud and as flashy as I possibly could so they could scream Vegas!
Click here to watch her video diary.
Vote Ended 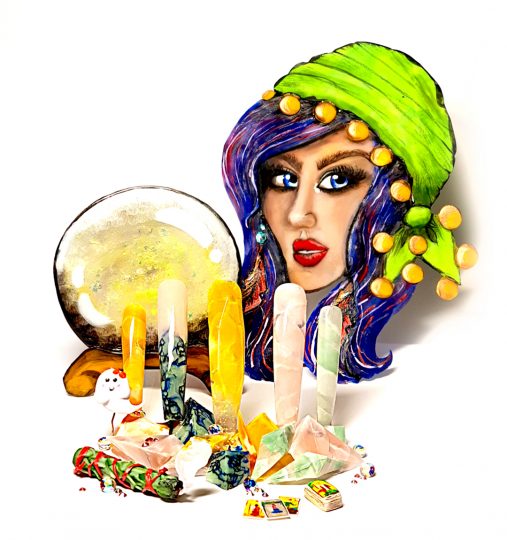 In this week’s challenge for LeChat, we had to bring a superpower of ours to life on five tips. I chose to depict my psychic abilities on the nails. Now it may or may not be common knowledge that the majority of people with this psychic gift, are really into crystals, sage, incense, tarrot cards and things like that, so I thought I’d bring to life these items along with a sculpted gypsy, after all, they are stereotypically known to be psychic.

The tips in particular, I chose to  create the crystals on them, because I could use three nail art techniques (also a challenge requirement)  to bring them to life. The citrine nail was a challenge though! I desperately wanted to come up with an acrylic way of faceting nails, because there’s plenty of gel techniques out there already, and zero on faceting with acrylic. So after a few failed attempts at this, I came up with constructing a mould with facets to fit the nail. A little advanced of a technique, but I still kept it in the video. The three techniques I chose to validate in my video were marbling,  ombré, and colour blocking. These three techniques are very salon friendly and easy to do, hopefully inspiring nail techs out there to incorporate them in their services! 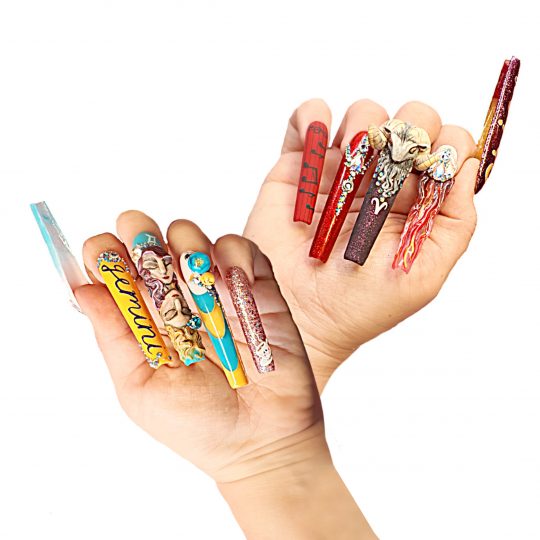 Being a Gemini myself, I wanted to strongly indicate my indecisive nature by the use of the two contrasting colours Sahara and Tropicana throughout the whole hand. With the 3-D French, I also made sure to make the alternating coloured segments uneven in length to further enhance the indecision and instability of being a Gemini. I also had to include the twin ladies, which are well-known for the star sign, but I made them out of 4-D gel (which I made by mixing corn flour into EnVogue’s modeling resin). Another characteristic I had to include was the air sign because, let me tell you, one minute I’m like this and the next I’m like that! Just like the wind can change direction at the drop of a hat. Also, wind causes ripples over water, so I showed that on the thumb nail. To finish off my star sign set, I added a little tea cup to represent “spilling the tea” or gossiping which I also love to engage in! I added some candy roses to the ring finger along with some Swarovskis throughout the set and these nails are done!

For the Aries hand, I just had to take reference from my mother who is an Aries herself and she is to the point, abrupt, and loves to sing and dance! Being a fire sign, I just had to include a flame nail and I made it 3-D by sculpting En Vogue’s gel over the painted flames, making sure to place and layer the gel multiple times so only the flames appear raised and 3-D, as opposed to being encapsulated by the gel. I also included musical notes because mum just loves to sing and let’s not forget the 3-D ram’s head I sculpted out of that 4-D gel too. The reason I opted to make my own 4-D gel  is because I set myself a personal challenge to ONLY use En Vogue’s products and if it meant getting creative, so be it! I also mixed my own cover pink using only En Vogue’s products for the same reason! 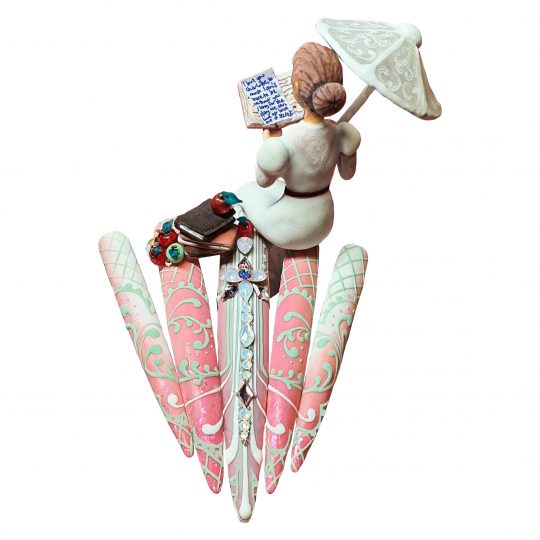 The 18th century Romantic period was all about emotion over reason and individuality over conformity, to name a few, and this was evident in art work, novels and poetry of the time. I chose to focus on the “emotion  over reason” characteristic of that time. The 18th century was a time where women had no rights, and were still considered property, though side note: the 18th century saw an increase in single mothers which then in turn triggered the women’s rights movent. Now, I had to marry the “emotion over reason ” with a “secret garden”. So, I created Charlotte who was married off by her parents like property. In this scenario, Charlotte’s heart is a secret garden that blooms with love. It’s a secret from society because she is a married woman having an affair, but also her lover is female. Two very strong reasons for that era to keep her love a secret, but also depicting how Charlotte chose emotion over reason, and didn’t want to conform to society’s norms. This is more a metaphorical interpretation of a secret garden.

My literal interpretation of a secret garden was represented in the five tips I created. Since we couldn’t use florals in this challenge, I chose the next best romantic thing, which is lace and filigree. The nails are adorned with the filigree pattern in CNDs Magical Topiary and Lady Lilly. But I also included lace on Charlotte’s attire to further enhance the romantic theme. I positioned Charlotte facing away from the camera in my final photo, to depict the secrecy of what she is doing. As I mentioned in my video, Charlotte receives love letters, which she hides in poetry books til she is able to head down to a secret spot in her garden (represented by the tips) where she sits under the sun to read her lover’s correspondence.