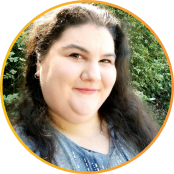 Rebecca Compton became a licensed nail technician in August of 2018, and specializes in hand-painted nail art. A Baltimore native, she began painting in her Grandmother’s ceramic shop when she could hold a brush. She doesn’t believe in buying things that she can make. Her creativity has led her to amass a dragon’s hoard worth of painting, sculpting, sewing, and knitting supplies as well as saving packing materials that she probably shouldn’t. Rebecca reads really fast, hits hard in Roller Derby, and will do her best to thwart your strategies playing board games. 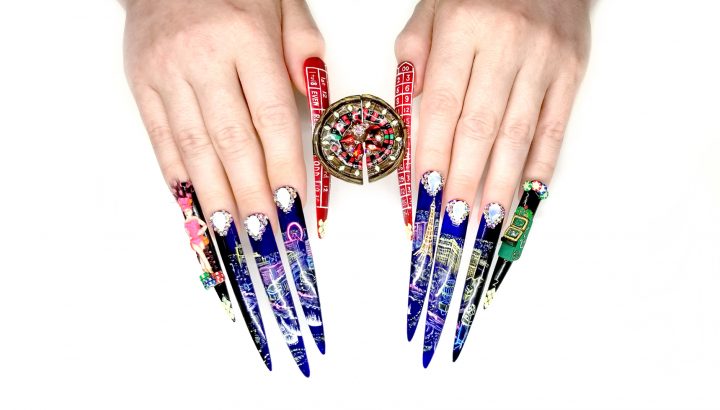 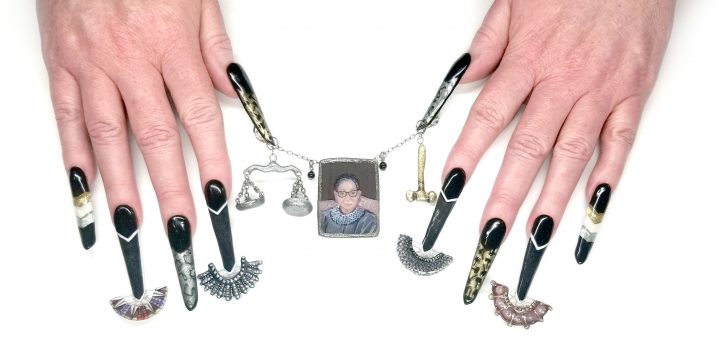 My inspiring icon is Ruth Bader Ginsburg, the associate justice of the U.S. Supreme Court. She is the second female justice appointed to the Supreme Court and has spent a considerable part of her legal career advocating for gender equality and women’s rights. She is best known for her liberal dissents, her refusal to step down, and the elaborate jabots she wears with her robes. When brainstorming French Manicures, I thought about how they edge the nail like a cuff or collar, and I envisioned Justice Ginsburg’s jabots at the tip of a nail forming the curve of a French Manicure. On this manicure, I recreated five of Ruth’s often worn jabots in miniature. An orange and teal inlayed collar. Her “dissenting collar”, a black collar resembling studded lappets is notably worn when she wishes to express condemnation. A Stella and Dot necklace that ombres from silver to black in feathery layers. Her “announcing the opinion of the court” gold and pink collar was a gift from her law clerks. The painted portrait depicts her wearing her favorite jabot, a white lace collar from Cape Town. 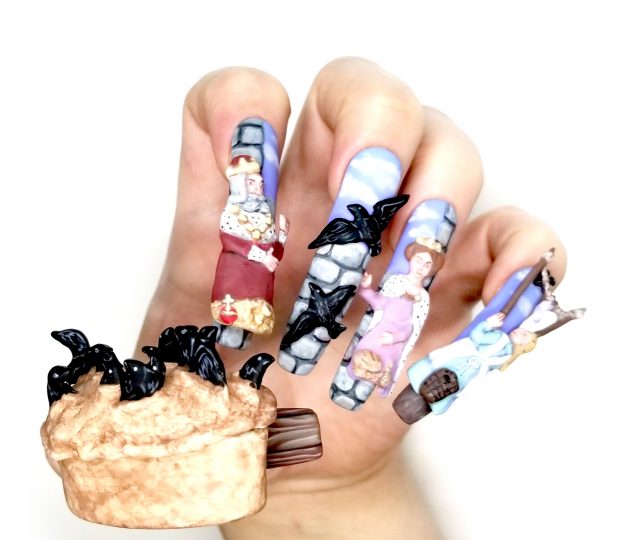 The nursery rhyme I chose to represent in nail form is Sing a Song of Sixpence. I loved the idea of making birds pop out of a pie. I know that in the 16th century, live birds would be baked into pies to serve as an amusement between courses to surprise guests. There are many interpretations of the nursery rhyme. The king, queen, and 24 blackbirds alluding to the sun, moon, and hours in the day. The blackbirds being stand ins for the monks whose monasteries were disbanded by King Henry VIII. Even a debunked interpretation that the pirate Blackbeard used it to recruit new pirates. It was great fun to research. For my nail set, I have a king in his counting house and a queen eating bread and honey. I’ve also sculpted a maid hanging out clothes (a knitted sock of course) who may have lost her nose. There are 24 blackbirds total on the set, in the pie, and flying on the front and back of the nails.

Sing a Song of Sixpence

Sing a song of sixpence,
A pocket full of rye.
Four and twenty blackbirds,
Baked in a pie.

When the pie was opened
The birds began to sing;
Wasn’t that a dainty dish,
To set before the king.

The king was in his counting house,
Counting out his money;
The queen was in the parlour,
Eating bread and honey.

The maid was in the garden,
Hanging out the clothes,
When down came a blackbird
And nipped off her nose.

I’ve never been to Las Vegas, and I struggled on how to proceed with this challenge until I remembered that I had a gambling grandma, Margaret Compton. She had a miniature roulette wheel, a slot machine, and even had my grandfather build her a Plinko game board. She loved Bingo, and the few times I went with her she would be dabbing away on several sheets while I desperately contested keeping up with my one. I think she memorized all of her numbers. Margaret frequented Atlantic City yearly, and made a one time special trip to Las Vegas with all the adults in the family. My grandmother passed away last year, and I wanted to make this set in her honor. I’ve got her roulette wheel and slot machine on the nails. She also enjoyed a chorus-line act when they visited Vegas.The showgirl depicted on the nails is based on a Jubilee! dancer from Bally’s Las Vegas because I liked the pink and orange color scheme (Jubilee! was a topless show, but this is not that kind of nail competition so I gave her some more clothes). I also loved the neon night skyline pictures of Las Vegas that I found during my research. I used an under-painting technique to capture the skyline and then tinted it with fluorescent paint. I had to include the Fountains of Bellagio, the High Roller ferris wheel, and the Eiffel Tower and air balloon sign for Paris Las Vegas.
Click here to watch her video diary.
Vote Ended 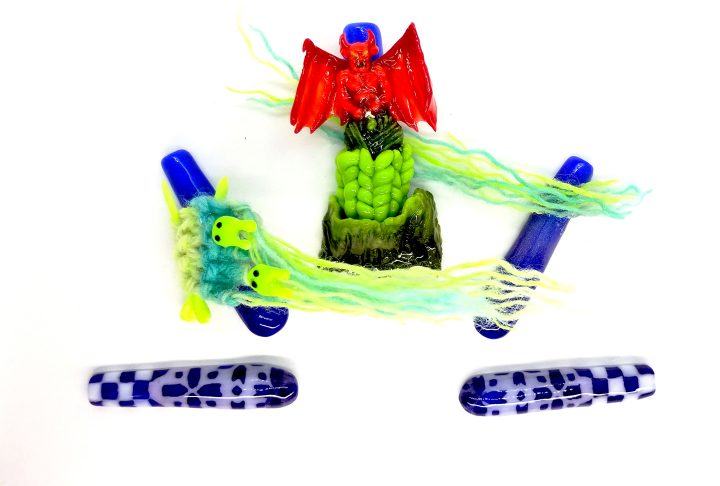 I am a knitting speed demon. I have hundreds of knitting projects finished, and I knit everywhere. You wouldn’t believe the amount of extra personal space people give you when you walk around with five pointy metal sticks. I even learned to knit in the dark so when my husband begs me to go see bad movies with him I’ll still be entertained. I took a class on knitting backwards from famed knitting author Annie Modesitt, and she walked around the room to see our knitting styles (I knit continental because it’s faster). She called me a speed demon, and I always look back fondly on that memory.
My design has two colorblock nails (a technique I learned from Kirsty Meakin) with racing checker-flags that morph into sweater snowflakes. Then three dip ombre nails done in the style of Jes Alexander, with a mist of my own hand dyed yarn. I dyed it with Lemon-Lime and Artic Green Apple Kool-aid. In the center is my sculpted winged demon (done in orange because that is my favorite color) atop a 3-D knit stitch mountain (a technique I learned from Natasha Harton). 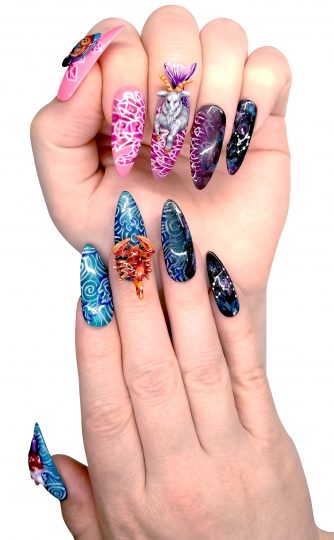 My zodiac sign is Scorpio and the compatible sign I chose is Capricorn. I knew I wanted to have the constellations on the nails as well as represent the associated elements for each sign. Scorpio is a water sign and Capricorn is an earth sign. I ended up doing an ombre across each set, from black to the pure teal and coral colors. As soon as I saw the colors En Vogue included, it reminded me of the time I spent working in a fabric store. Whenever we had a customer who was worried the gift they were making wouldn’t suit the recipient, we would steer them toward a teal or coral color, because those hues are compatible with nearly every skin tone. I picked the coral hued Simply Color in Hibiscus for my Capricorn hand with a crystal inspired pattern (Quartz from Tibet photograph in video taken by JJ Harrison https://www.jjharrison.com.au/), and the teal-toned Simply Color in Mermaid for the Scorpio hand with a pattern inspired by the woodblock print, The Great Wave off Kanagawa by the artist Hokusai. I also wanted to show off my sculpting skills and make a tiny Capricorn and Scorpion figure to adorn the nails as well as a surprise; you are going to have to watch the video to find out. 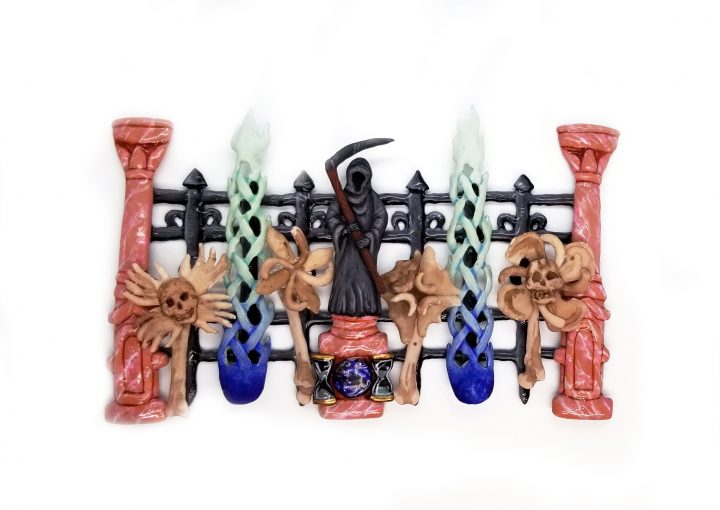 My design was heavily influenced by the Sedlec Ossuary beneath the Cemetery Church of All Saints in the Czech Republic. It contains the remains of more than 40,000 individuals. While the church itself
predates the Romantic period, in 1870 it commissioned the bone heaps to be arranged to decorate the chapel. The furnishings include a bone chandelier and garlands of skulls. I feel that this captured the
macabre spirit of the time much like The Nightmare (1781) painting by Henry Fusell which shocked and frightened the viewer. I included the columns to represent the church, the bone arrangements to be viewed as flowers, and the reaper to signify death.

I also wanted to touch on the examples of protest art depicting class inequality and the abolitionist movement, The Raft of the Medusa (1818-1819) by Theodore Gericault, Liberty Leading the People (1830)
by Eugere Delacroix, and The Slave Ship (1840) by J.M.W. Turner. This made me want to include a contemporary social issue in my piece, and I chose to depict unchecked climate change exacerbating natural cycles, specially the brush fires currently burning in Australia. I included the flame nails as well as hourglasses almost run out of sand, as well as a globe with Australia featured prominently.