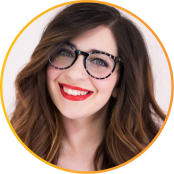 I’m a 29 year-old chemical engineer and, even though I love my job, I’m really passionate about nails. Designing nails is the perfect way for me to express myself, to continue learning and to improve my techniques. I pay attention to details, I love sharing my work and inspiring other technicians. I am known for my perfectionism, dedication and persistence. When it comes to a good challenge, I simply can’t resist! 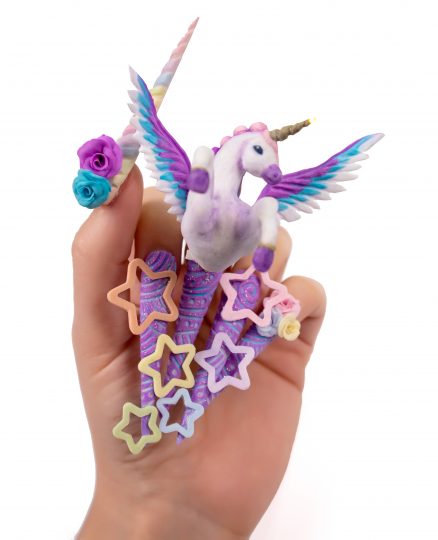 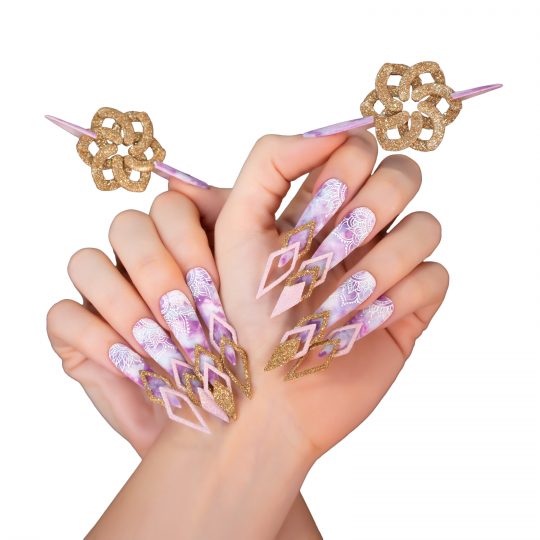 I chose the Unicorn. I wanted to carve all the nails in different, yet similar style, in order to challenge myself more and create intricate carving patterns using solely the e-file. I layered colors while sculpting in order for them to be revealed after carving and make for a dreamy look fit for a dreamy creature like the unicorn. I wanted to make the unicorn the focal point of this set, this is why I sculpted it 4D with kinetic wings, popping out of the nails like he is flying towards us! I completed my design by creating 3-D roses, rainbow horn, and rainbow carved stars. 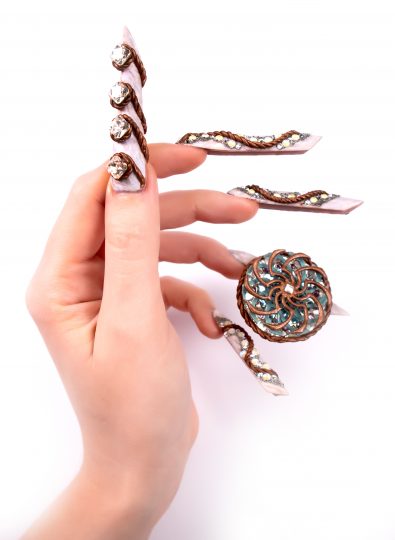 This week we were challenged to create a set of five nails inspired by Swarovski’s new trends for spring and summer 2021. When I saw the report I instantly fell in love with the Sleek Shimmer trend! Sleek Shimmer celebrates design that has soul, imbued with artful minimalism and timeless simplicity. And this was my goal for this set. I created a delicate kinetic sculpture inspired by the moiré pattern. A moiré pattern is a type of pattern, created by two of the same shape placed backwards and rotating in opposite directions. When seen from far away, it looks as if one shape is moving in an impossible way! The sculpture is visually attractive when still and it becomes truly fascinating when in motion! I also incorporated handmade rope in my design in order to give clean and unique texture that suits perfectly for the sleek shimmer trend. 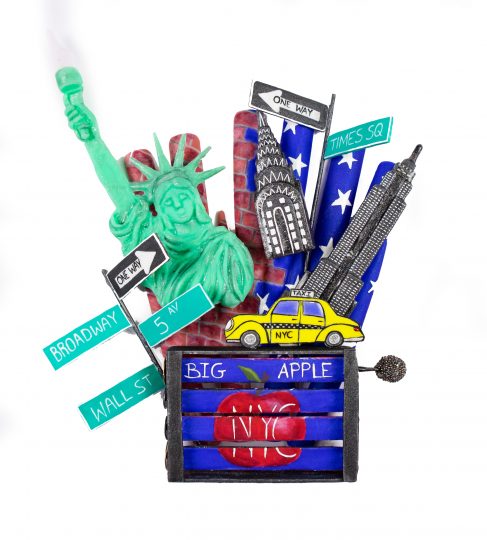 New York is my dream destination this is why I decided to combine various elements that remind me of New York to make you feel like you travel there! I sculpted the Statue of Liberty and two of the most iconic skyscrapers, the Empire State Building and the Chrystler Building! To represent Times Square, I created a fully functioning trivision billboard. There are three images: One for The Big Apple, one for our sponsor Gel II, and the last delivers a message that I felt the need to incorporate in my design considering all that is happening around us due to the pandemic: “Staying home saves lives.” Last but not least I completed my design by creating a taxi, road signs and painted the background in brownstone buildings style and part of the USA flag. 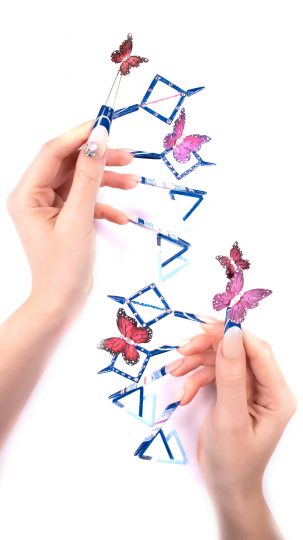 For this challenge we were asked to create a set of 10 nails sculpted on actual hands, inspired by the French manicure, for an icon from today who inspires us. My icon is Katy Perry. I admire her both for her talent and her personality. She is a fighter who never gives up on her dreams. For this set I was inspired by her music video, “Wide Awake,” and from one of her live appearances. Katy is like a butterfly herself. She transforms for each of her appearances. This is the reason I wanted her nails to be able to transform too. So I created a combination of butterflies and geometric style nails. The moving shapes are inspired by the penrose triangle, otherwise known as the impossible triangle. 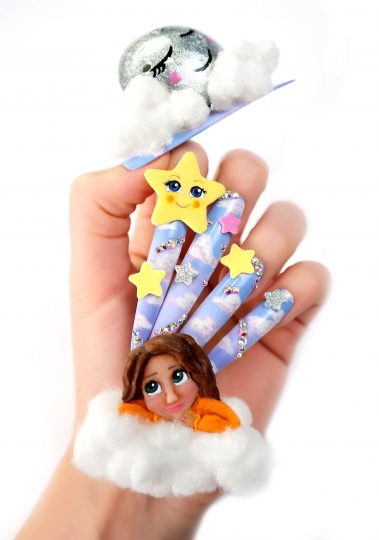 The first rhyme that came to mind is Twinkle Twinkle Little Star! My name in Italian means “star” and my mother used to sing the Greek version to me and called me her little star. I wanted to make this set cute and cartoon-style to represent childhood innocence. This is why I created a mini version of me as a little girl in cartoon style sitting on a cloud watching the beloved little star! I also wanted to actually be able to play music and listen to the song from the nails. This is why I created a fully functioning ocarina in the shape of the moon! This was the most challenging 3-D design I’ve ever created as it is extremely difficult to make a playable musical wind instrument with nail products so tiny. 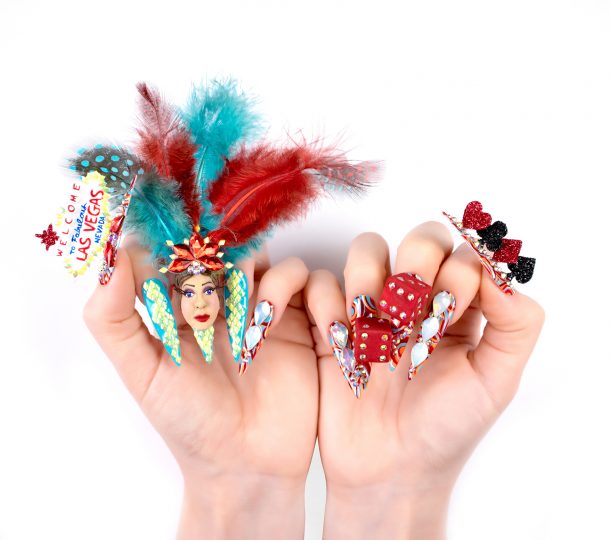 I’ve never had the chance to visit Vegas, but everybody knows it’s the holy grail of entertainment, night life, gambling and luxury! And this is exactly what I wanted to show in this creation. I created the welcome sign and a 3-D fancy showgirl to symbolize the night party life. I also created card symbols and detachable dice to represent the gambling! The main pattern seen in almost all the nails is inspired by casino carpets. In casinos you will always see colorful patterned carpets. Last but not least, various shaped and colored crystals are used to represent the luxury. 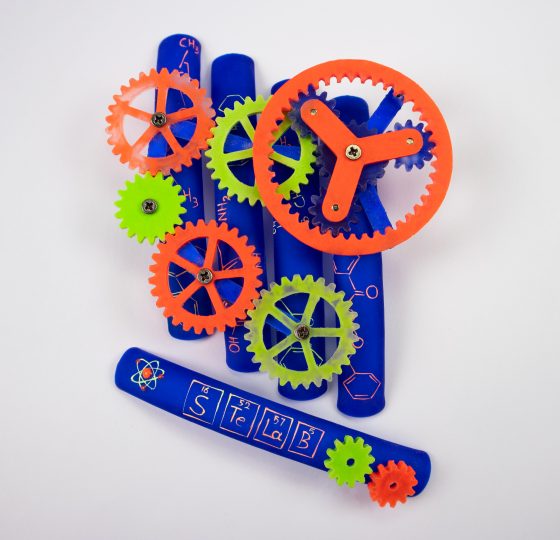 Doing nails is definitely our superpower but this week we were asked to create a set on five nail tips illustrating our other superpower using three different nail techniques. The first thing that came to my mind was “Chemical engineering.” I’ve studied chemical engineering and I’m working in this field alongside with doing nails. A chemical engineer combines a little bit of chemistry and a little bit of engineering. What I love about my job and consider it as my superpower is the power of knowledge to develop and optimize new products. This is a different kind of creating than arts but I love both! For this challenge I wanted to illustrate my super power by creating an intricate moving gear set with different sized gears and an amazing planetary gear, all properly engaged and fully working! This is the hardest 3D creation I’ve ever made because in order for it to work it demands absolute precision and accurate engineering design using a cad software to design and calculate every detail of the gears correctly. I chose to present this piece: Stella’s laboratory (SteLab) in intense, neon and glow in the dark colors because I wanted to give an artistic and fun touch to my superpower! The gear set symbolizes the engineering part of my super power. The chemistry part is on the nails. All those chemical structures are inside nail products we all use! I’ve also painted the serotonin chemical structure which is there to represend the happiness I feel when creating. 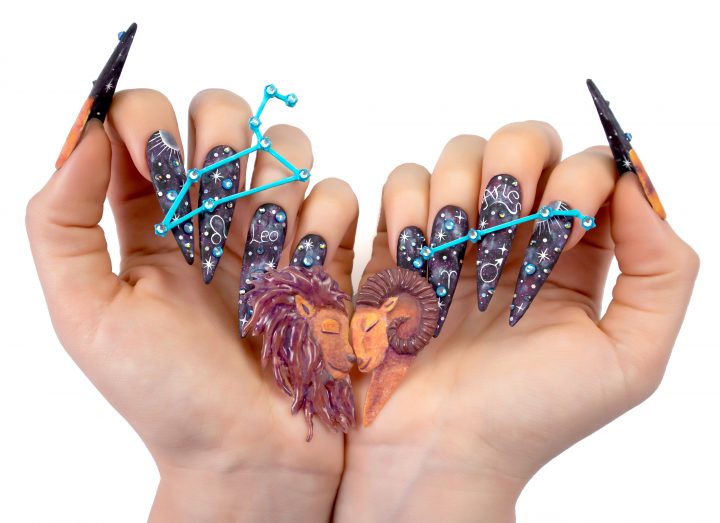 I’m an Aries and I wanted to illustrate my special connection with Leo! Both are fire element zodiacs, so this connection is perfect! I wanted to create my two signs as a perfect couple that is drawn together by the stars. So I placed both of them in the galaxy among the stars where their love is born. 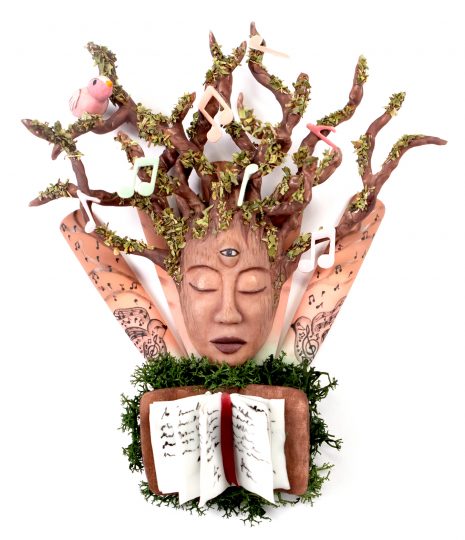 Romanticism was an artistic, literary, musical, and intellectual movement that originated in Europe toward the end of the 18th century. I wanted to create my secret garden inspired by one of the most loved English poets, John Keats, and his poem “Ode to a Nightingale.”  According to one account it was written by Keats under a plum tree in the garden of Keats House, London in May 1819. Keats was inspired by hearing the sound of birdsong and penned this poem in praise of the nightingale. I wanted to give it a twist so I created my secret garden as an “ode to John Keats” in my own surrealistic way. The human head that is also a tree symbolizes the importance of nature for Keats, as nature was one of the greatest sources of inspiration for him. Keats also said that: “Heard melodies are sweet , but those unheard are sweeter”, this is what the third eye in my tree represents because senses are more limited than the imagination and its creative power. My cute nightingale is standing on the branches, singing a melody that is spread all over Keats’ head that seduces him as he writes his thoughts in the book.