Becca vs. April vs. Helen 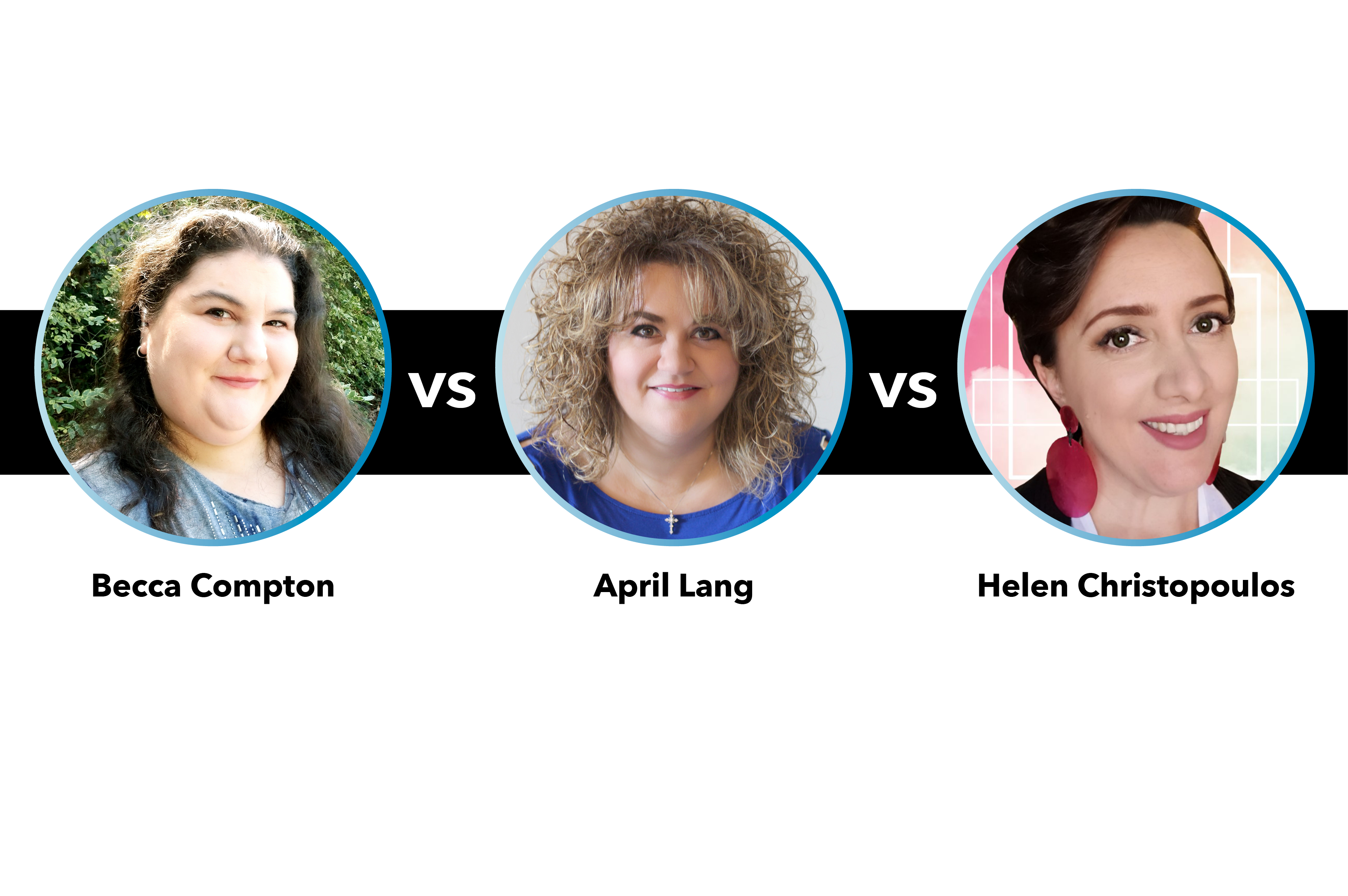 For Season 7’s sixh Last Chance Design Lab challenge sponsored by CND, Becca Compton, April Lang, and Helen Christopoulos will battle it out to see who has a chance of staying in the competition. CND’s Jan Arnold will select her favorite look Friday and you’ll find out who will remain for at least one more week.


All Last Chance challenges are done on a single nail tip. Contestants are also asked to describe their looks. There are no other elements to this battle.

California Love: The opposite coast from NYC is where NAILS and CND are based. Create a California city on a single nail tip with 3-D artwork. 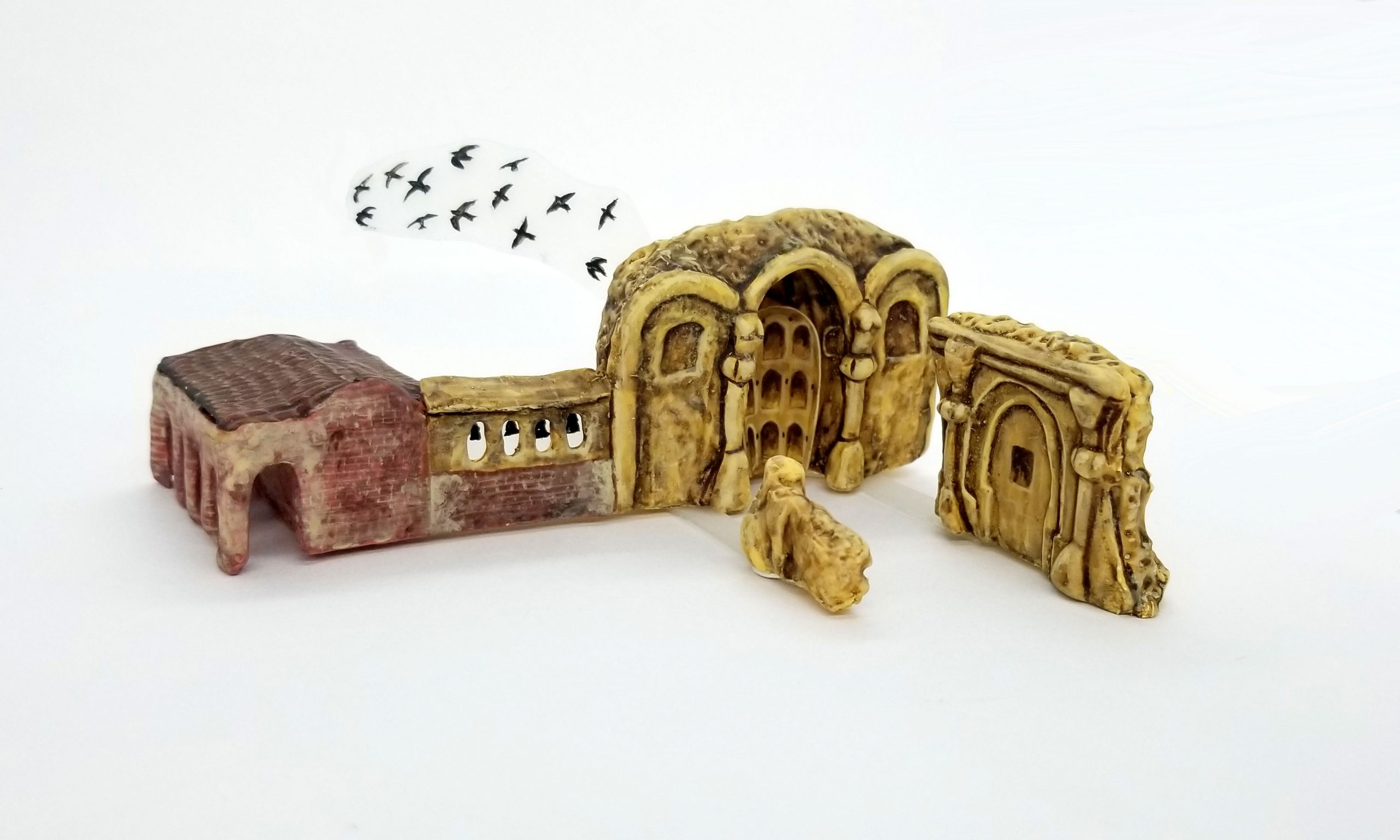 The California City I choose is San Juan Capistrano. I loved the architecture of the church and the city’s legend of the swallows. I represented it by reproducing a portion of the Mission San Juan
Capistrano. The nail tip is positioned (underside facing) in the sanctuary of the church which is the focal point where the altar would reside. The Mission was founded in 1776, and was damaged in several
natural disasters. Efforts to renovate the mission started around 1910, and the ruins of “the Great Stone Church” have been integrated into a larger modern church complex. The Mission is renowned for producing the first wine in Alta California in 1783 as well as the Legend of the Return of the Swallows. According to legend, the birds, who have visited the San Juan Capistrano area every summer for centuries, were invited to take refuge at the Mission by Father St. John O’Sullivan, Pastor of Mission San Juan Capistrano, when he saw an irate innkeeper destroying their mud nests. The next morning, Father O’Sullivan discovered the swallows busy building their nests outside. The miracle of the “Swallows” of Capistrano takes place each year at Mission San Juan Capistrano, on March 19th, St. Joseph’s Day.
Swallows migrate 6,000 miles from Goya, Argentina to San Juan Capistrano in large groups.  The town of San Juan Capistrano welcomes visitors from all parts of the world to witness the return of the swallows, a tradition that has been celebrated since the early 1930s. 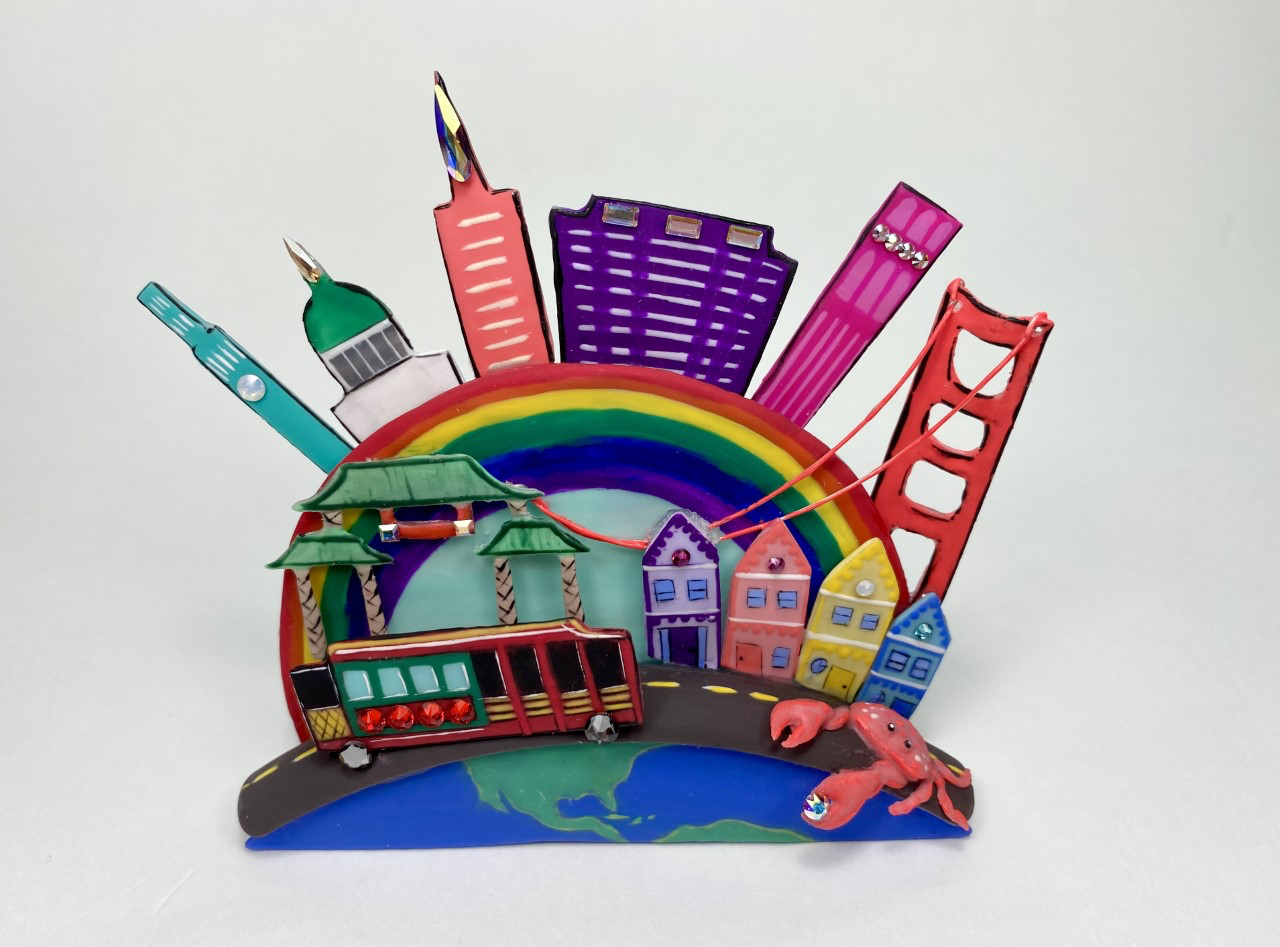 For the California Love challenge, I picked San Francisco. I included several things that represent San Francisco in my piece. The friendly crab made an escape from Fisherman’s Wharf! The iconic cable car is climbing one of the famous San Francisco hills. Also, the two story row houses line our street. In the back, the world famous Golden Gate Bridge can be seen. A solidarity rainbow adds color and represents the many different people and cultures that call San Francisco home. Finally, the city’s skyline can be seen in the distance to let us know there is much more to this amazing place! 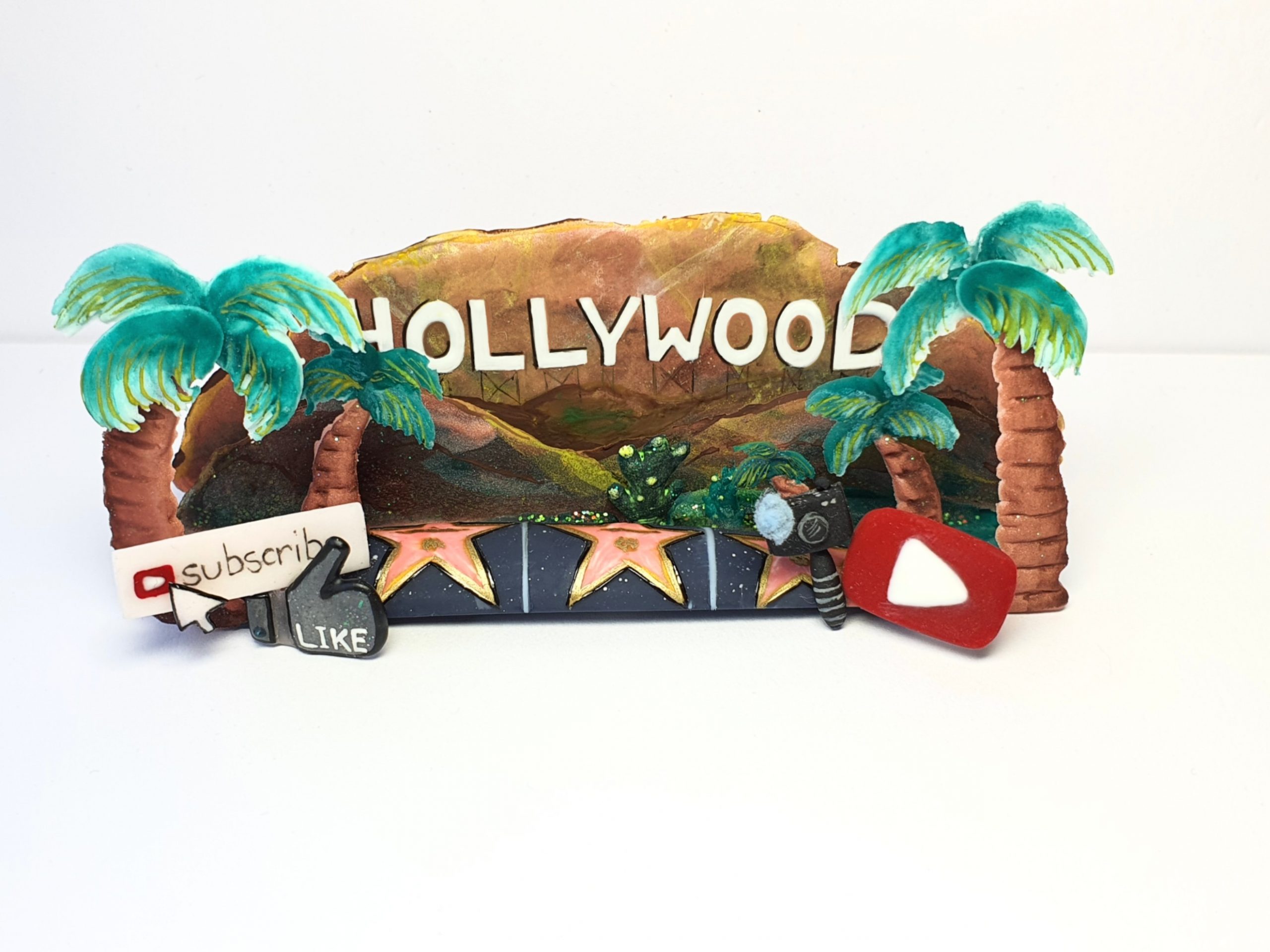 I chose to do Los Angeles.  Not only is L.A home to the rich and famous, but increasingly lately, also has become home for a lot of big and famous YouTubers. Since I too have a YouTube Channel, and would also love to visit L.A sometime, I wanted to put those two aspects into my design. So in the background I have the Hollywood Hills with the infamous HOLLYWOOD sign. On the nail tip itself, I drew the Hollywood walk of fame with 5 stars across the whole length of the tip, with a couple of palm trees on either side to scream L.A. Now to add the YouTube element, I added the standard vlog camera with microphone that all L.A vloggers use, along with YouTube’s logo to the right of the nail, while on the other side, I put what ALL YouTubers ask their viewers to do which is to “like” their video and “subscribe” to their channel. YouTube is definitely taking over with each year that passes. You can even see a lot of celebrities starting up their own YouTube Channels to stay updated and relevant. It will definitely be interesting to see how far YouTube will go. 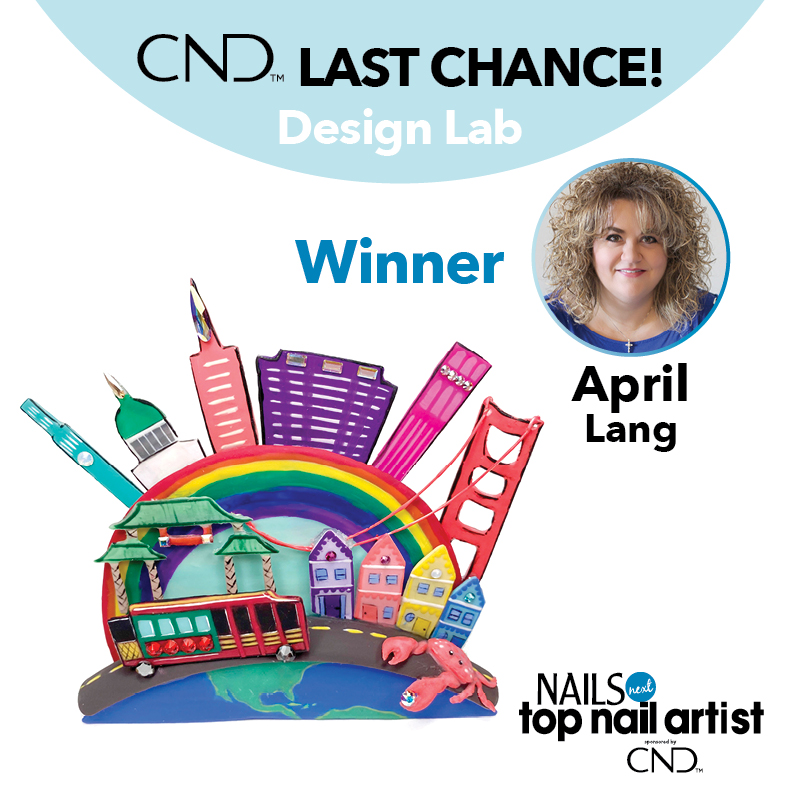 Congratulations to April for winning the sixth CND Last Chance challenge of the season! April went up against Helen and Becca to sculpt a California city on a single nail tip. CND’s Jan Arnold chose the winner.

This means April will move on to compete against the next eliminated contestant. Find out Friday who that will be.