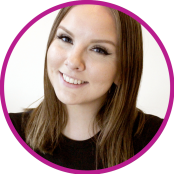 Full Name: Ella Sandblom
Hometown: Stockholm
Salon: Semilac
Preferred Nail Art Medium: Gel
Favorite Nail Trend: 3-D Nail Art
I am 26 years old and I am from Sweden. I have done my own nails for over 6 years, but I’ve only been a licensed nail tech for less than a year. I started out with learning techniques from Youtube, and then I started my own channel showing my work and process. I love to get to combine photography, filming and editing with nails. What sets me apart from the rest is probably that I have always had creative hobbies, and have worked with a lot of different materials and techniques over the years. I started out making clay figures as a kid, and have since then created jewelry, phone cases, paintings, sewn my own clothing and much more. I also have a degree in graphic design, so creativity is basically the only language I speak.

This time the challenge was to create a futuristic nail design, using only metallic colors in addition to white and black. The nails were supposed to be over the top, and to have one of the ‘over the top effects’ in the design. I chose to interpret the futuristic part of the challenge as what kind of nails we are going to be using in the future. I think that in the future the nails will be more of a statement, and that they will go more hand in hand with the jewelry we are wearing. I chose to make parts of the nails magnetic, so that you in turn could attach different jewelry to the actual nails. This would be perfect for nights when you want to ‘dress up’ your nails a bit, but then the next day you want to be able to have the nails more plain again.

I created a metallic nail set using different techniques on each nail, some with silver glitter, nail foil, striping tape, marble and rhinestones. On a few of the nails I attached magnets, and I placed another magnet on different jewelry I created just for this nail set. The idea is that you in the future are going to be able to buy these attachments separately, and use them for many different sets of nails. That will bring many more looks to each set, but also different looks for the jewelry. The magnets are strong enough to stay on the nails, but also very simple to remove, and simple to place on another nail. For the other hand I created a similar design for the nails, and different jewelry. The possibilities for this idea are endless, and will take your nail game to a whole new level.

Watch her Over the Top reel

For this challenge we were asked to use no other medium than hand painting, which actually isn’t something that I do that often on my nails. Even though I rarely do a full set of hand painting, I know that my style of hand painting on nails is more towards animated/cartoon looking, rather than realistic painting. I want my nails to be playful and fun, and if I’m going to paint realistic characters I would rather do it on a piece of paper or a canvas. We were supposed to make two sets that were inspired by two different sleeves for Kupa’s lamps, and I chose to go with the ‘Unicorn’ and the ‘Moonlight unicorn sleeve’ since I wanted my nails to be as colorful and playful as possible. I decided that I was going to make the sets pretty much the same, just using different colors to create a night scene and a day scene. I wanted it to look like I did one painting across 4 nails, and I wanted it to be possible to change out the nails from the two sets, and to still have it look like just one painting. For the moonlight unicorn set I used a glow in the dark powder and mixed that with a builder gel, to create the cool glowing effect for that set. This gel I painted on top of the stars, the moon and the unicorn, and the effect came out just how I wanted it. You get the best effects out of this gel when you place the nails under a uv light, then it really glows. I think this set came out really cool, and just how I pictured it from the beginning!

I wanted to visualize my strength as a nail tech through 3-D modeling. That has always been one of my strengths since working with polymer clay earlier. For my personal strength I chose courage, mostly because I’ve had to work with that during the past year. I have always wanted to have a more creative and free job, where I get to combine my talents and hobbies, and not be constricted to working a set amount of hours during a specific time of the day. I want to decide for myself how I divide my hours and what I want to do. I’ve felt this for a long time, but these thoughts have always been met with skepticism from my parents. Since they’re from a previous generation, they have the mentality that you have to do things a certain way. You’re supposed to get good grades, get a higher education and a good job. They have unfortunately never been supportive of me going my own way, quitting educations because I’m not happy with them and pursuing a career that doesn’t have the stability that they envision for their kids. This year I decided that I can’t do things just because I’m pressured to, so I decided to start my own company and work with nails on Youtube/social media. It has required lots of courage to go for a career where nothing is guaranteed, where everything is completely new and I don’t have anyone to ask for help. Starting a company is difficult, there are big consequences for really small mistakes that are so easy to make in the beginning. But at the same time you learn a lot, and I’ve had so much fun working with something that I love! To symbolize the courage this took, I chose different symbols for courage to create a set of. The symbols are wolf footprints, a golden fish, peony flowers, an oak tree, a snake and a sword. It came together really well since almost all the symbols are about nature, which is typically my go-to source for inspiration anyway. I’m very happy with how this set turned out!