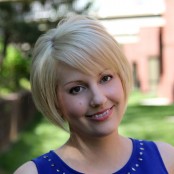 I am a lover of art, in all its forms. Drawing, painting, dancing, singing, acting and writing are all passions of mine, and I feel so lucky to have a career where I can let my creativity flow every day. I think the only other thing that can compare to my love of art, is my love for animals. If I’m not at the spa covered in glitter from my nail art adventures, I’m at my volunteer gig at the local animal rescue, covered in cat hair!

When I first looked at the Entity Beauty ads provided to us for inspiration, I immediately noted several “themes” that stuck out to me. There was the obvious dark to light transition between the different ads, and as I continued to look, I felt a sense of balance, or yin and yang. The flames and wings sparked an idea of angels, both dark and light, and my idea was born. My nails are set up in an ombre transition across the hands, fading between the dark side and light, with the cross over taking place at a yin and yang on the pointer fingers. In celebration of the 10-year anniversary of Entity Beauty, I chose to use the thumbs to create the true center of the design, where everything is equal and in true balance, and have both nails as the base for the Roman numeral “X”. Rather than using the numbers 1 and 0, I felt “X” went better with my angelic theme. Each nail has a sort of mirror image on the other hand, only from the other side of the spectrum. On one, there is a white, heavenly angel wing, and on the other a black, fallen angel type of wing. The pinkies are where the designs start, so the left is pure dark colors, with a flame design, and the right all light colors with a soft, whimsical pattern. Where the two begin to cross over on the pointer fingers, the blacks and whites sort of blend together in a paint splattered, whirl type of yin yang shape. The eyes of each are infinity symbols, representing the cyclical feel of the dark to light theme. I used acrylic to sculpt the light wing, and hard gel to create the feathers for the dark. Gel-polish was used to paint each nail, and I used an etching technique to create the texture in all of my designs. Finally, crystals and glitter added finishing touches.

Click here to see a step-by-step tutorial of how Lini created these nails.

Although I have been living in the United States for over 14 years, I grew up in Edmonton, Alberta, Canada. Since a part of me will always be a proud Canadian, no matter where I end up in the world, I chose to use a bright red maple leaf, a prominent Canadian symbol, as the “base” for my design. The maple leaf cradles the other elements, in representation of my forever love of my native country. For the other nails and elements of my design, I paid homage to my family’s origins: Ukraine and Poland. While I was born in Canada, my parents are in fact only second and third generation Canadians, and so my Polish and Ukrainian heritage have always been a large part of my family’s traditions. Growing up, we celebrated not only the North American holidays, but the Ukrainian ones as well. It’s definitely fun having more than one Christmas to celebrate! I created a traditional Ukrainian Easter Egg on one of my nail tips, using gel and acrylic paint. These eggs are typically created using dye and wax, so painting the design was definitely a new experience for me. The Floral Headdress is something familiar to both Ukraine and Poland, but the blue that I incorporated makes it more of a Polish style. Finally, for my remaining 3 nails, I decided to use slightly different sizes of tips to create a set of Stacking Dolls, seen in both countries. My design is photographed as a type of heritage-collage, but each of the nails could easily be placed individually on a hand, as well. For this challenge, I really pushed myself out of my comfort zone and tried to use as many different mediums as possible. I am new to 3-D sculpting, and I decided to go for it and create my leaf and headdress both entirely from acrylic. While it was definitely a new and slightly challenging experience, I learned a lot! This challenge was a lot of fun, and I’m proud to be able to share my background with everyone.

Click here to see a video of how Lini created these nails.

I was quite excited that this week’s challenge had a theme of L.A., because I could incorporate my love of fashion and one of my favorite designers into it. For my modernized French manicure, I chose to use Rodarte (specifically looks from their new Fall/Winter Collection) as the inspiration for my nails. Rodarte is a well-known sister design team from L.A. that is also worn by many famous Hollywood celebrities, so I definitely knew I had the basis for my L.A. French. I chose to use black and a deep charcoal for my French tip, colors seen on many of the pieces, paired with a silvery pink base, similar to some of the makeup worn in the show, and finally a touch of rhinestone detail to finish the look. I also incorporated a bit of matte to add contrast — all elements seen in several of the collection’s dresses. Many of the outfits in the collection featured sharp angular lines, and so for my tip I went with a pronounced inverted triangle shape. I wanted to create a manicure that reflected the look of the clothing seen in the Rodarte collection, and could easily be paired with any of those outfits on the runway, but was still classic enough to be worn by anyone. My design is something you could see on the runway, red carpet, or even at the office. It’s stylish for any occasion and definitely fits the non-traditional chic of L.A.

Click here to see a step-by-step tutorial of how Lini created these nails.

As soon as I heard this week’s theme, “In Too Deep,” I immediately envisioned the ocean floor and all of its mysterious secrets. I tried to envision what one would find in the ocean depths, especially since we were asked to incorporate Bio Seaweed Gel’s new collection’s feel of rich, sea-themed colors. Dark, murky waters seemed to evoke a sense of mystery and a little bit of danger, and when I combined all of these elements, I had my design: a sea monster. I chose to use one of the most famous monsters of the deep, the Kraken (who, after hours of creation, filming and a little delirium, has affectionately been named Steve!). I used a fantasy 3-D-inspired style, with the tentacles of the Kraken reaching up from the waves on each nail tip, as if the Kraken was trying to reach out right through the photo to grab the viewer. Gel was used to create the body, tentacles, waves, and detail elements of my design, which was a fun new challenge, since I’ve only ever worked with acrylic for sculpting in the past! I didn’t do much filing on the Kraken, as I wanted the body and tentacles to have an organic, almost barnacle-covered appearance. Multiple layers of paint completed the sea worn look. Beads really brought the tentacles to life, giving a nice suction cup look to the underside of each. I used a color scheme similar to those found in the “In Too Deep” collection to add extra relevance to this week’s theme. I had a lot of fun with this challenge, and I hope you all enjoy meeting Steve as much as I enjoyed creating him!

Click here to see a video of how Lini created these nails.

I can thank my husband for giving me the title of Katleesi after visiting me for the first time at the cat shelter where I volunteer. When he saw me sitting cross legged on the floor with several kittens curled up on my lap and one even perched on my shoulder, he jokingly called me the Mother of Kittens, and being a Game of Thrones fan (Kahleesi, the Mother of Dragons is a character from the series), I found it both endearing and fitting. I am a huge believer in the protection of animals and I volunteer, donate, and educate regularly to support organizations that promote animal welfare. My design simply shows me being me: an animal lover and advocate through and through. My caption “Katleesi: Mother of Kittens” sounded like something from a fairytale, and so I went with a very cute, whimsical theme. The finished design is meant to look like the cover of a children’s storybook.