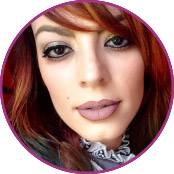 I received my certificate in September 2014 so I’ve been been a nail tech for almost three years. When I enjoy something I jump in with both feet. I will research and practice until I’ve mastered my chosen skill. When I discovered that the  nail industry reached far beyond the salon I went crazy. I started applying for competitions and entering contests. It was by doing this that I discovered #GelishPlayAtHome. This is how I ended up doing my first 3-D piece, which is now one of my favorite things to do. I’ve always been a creative person and when I worked jobs that didn’t allow me to express myself in this way I felt like something was missing. This is how I stumbled into nails and I never looked back. Being from the tiniest town in Alberta, I’ve had to work very hard to get people out of the square white French and into more adventurous designs. Now people spot my nails all over town and know that I did them. 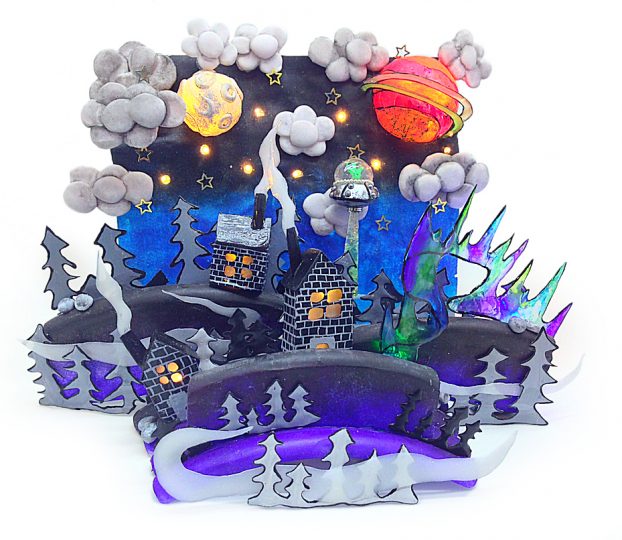 For this week’s challenge we were asked to create a Northern Lights cosmic set inspired by INM’s famous top coat. This top coat is a favorite among nail artists because of its mysterious shimmery sparkle. I wanted to add some of this sparkle to my set by creating glimmering cosmos above a mysterious foggy small town forest. I also had to include the inspiration for INM’s top coat. Growing up in northern Alberta we have the privilege of seeing the lights on a regular basis and each time is more amazing than the last. So I had to add them in. I hope I did them justice! I also wanted to include Saturn. Saturn is the ruler of Capricorn, which is my zodiac sign so it was important to include it in my cosmos. I also included the moon because you can’t have a mysterious night without a full moon.

Editor’s Note: Click on the image above twice to see an alternate view.

Click here to see a step-by-step tutorial for how Deanna created these nails. 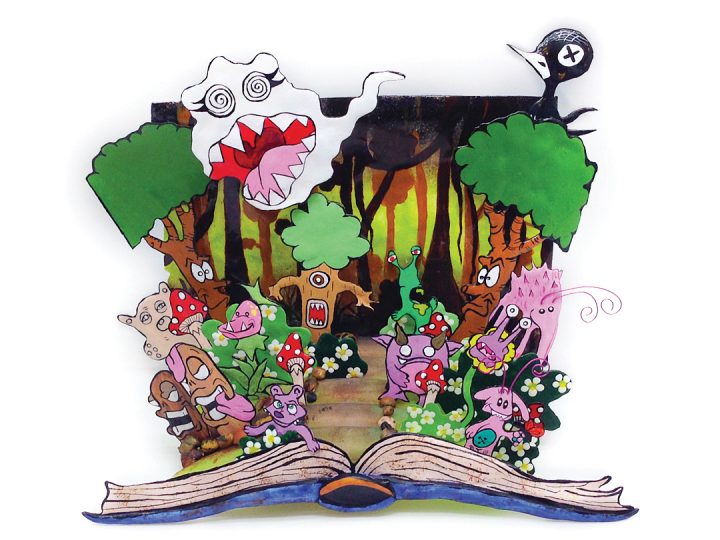 My creative process is kind of all over the place, and I’m probably not alone. You never really know when you’re going to have a burst of creative energy. This is why I bank ideas. I will think of something in a dream or in the shower or from an old book. I write these ideas down in a note on my phone and I also have an album on my phone dedicated to inspirational pictures of things I would like to incorporate into a set one day.

When I read this challenge I thought it would be perfect for this cute creepy monster set I’ve been wanting to do, and it’s just in time for Halloween. While I got to work on this challenge I had the idea that this piece was starting to look like a crazy popup book, like the ones from my childhood but with monsters. So I ran with it. 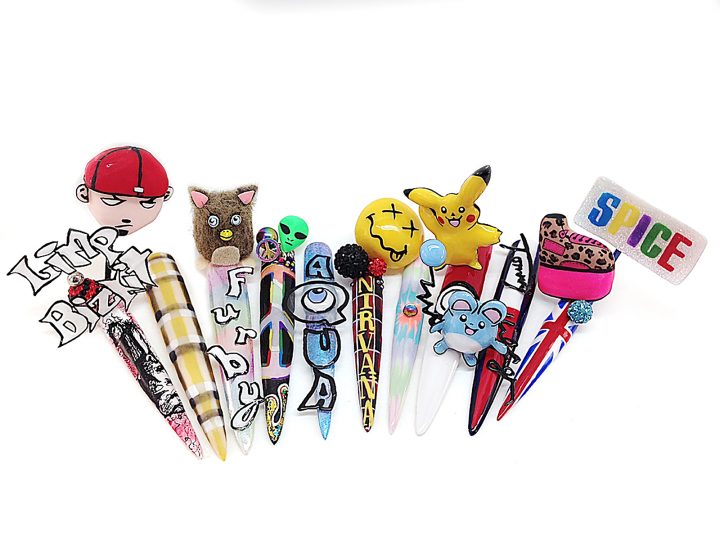 This week’s challenge was a no-brainer for me. I had wanted to do a killer ’90s set for a while. I was a kid in the ’90s and that’s when all the best things happened.

I went from a girly girl to a rock fan in a year. I was listening to Spice Girls and Aqua and rocking all the metallic shiny sparkly glory that was the ’90s. Then one day I woke up and liked Korn and Limp Bizkit, just like that.

My fashion choices also changed. I shed my sparkly layers and rocked everything Tommy Hilfiger designed. He got every dollar I had in those days! I had rings and socks and jeans and sweaters, all Tommy all the time!

The ’90 s birthed some of the greatest movies ever! But if I had to choose the most iconic movie from that decade I’d have to say Clueless. My whole grade was taking like Cher.

For some reason aliens were hugely popular in the ’90s too. I’m not sure why but it was a must to have an inflatable alien for your room, along with plenty of other useless inflatable items.

Anybody who was anybody had a Furby in the ’90s and you and all your friends had to make play dates with your Furbys. If you didn’t have a Furby then you couldn’t sit with us! Just kidding, we were nice girls.

Also your social standing was non-existent unless you were a Pokémon master. Similar to today in the ’90s we also spent all our time staring into a tiny screen.

The ’90s were the best! I’m so pumped that they’re huge again! Can someone point me in the direction of the nearest Tommy store, please?!

Click here to see a step-by-step tutorial of how Deanna created these nails.

See You on the Backside 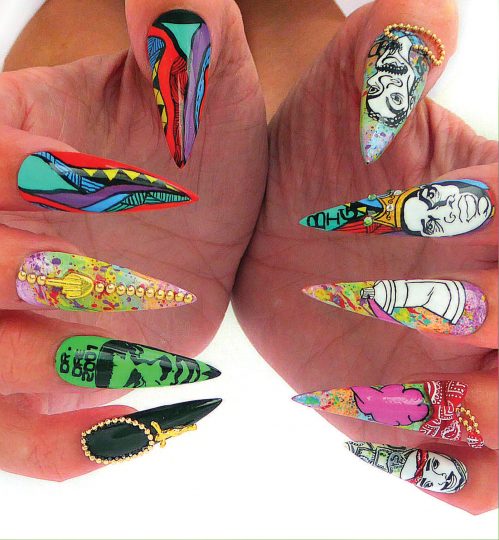 For this challenge we were asked to create a set that had amazing art not only on the front but on the back of the nail as well. This was a very exciting challenge for me because I have actually never done art work on the underside of the nails. So I got to my research and looked up various Minx products. I thought the best wrap for me to create would naturally be one that people would love. So I thought about what I love. I love music; lots of different genres appeal to me. One genre that I really love is rap/hip-hop. I love the energy the songs have and the powerful beats. I started to think about how rap has evolved. People like Snoop, Dr. Dre, Notorious B.I.G., and Tupac came to mind. I couldn’t find a Minx wrap online that had a street vibe so I put their music on and got into a vibe. I had so much fun creating this set. I love nails to be fun! I hope that you can feel the music when you look at this set.

Click here to see a step-by-step tutorial for how Deanna created these nails. 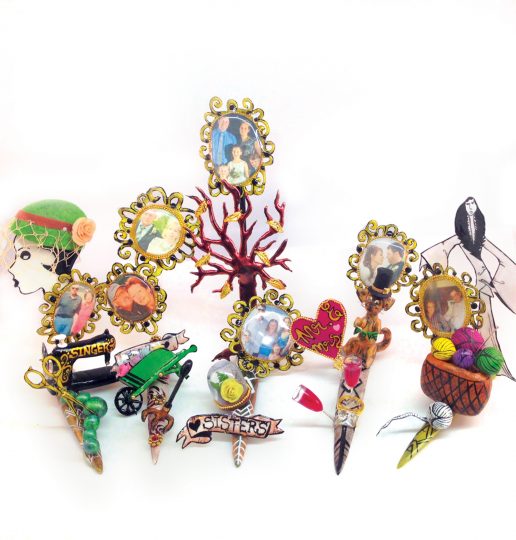 When I originally received the challenge my family was the first thing to pop into my mind. I knew this would be a difficult task to emulate my family on five nail tips. I tried my darnedest and it was loads of work!

For my first nail I chose my grandma and grandpa Haas. This was an especially emotional challenge as we just brought them to their final resting place on Saturday. My grandma Haas had a lot of influence on me. She spent countless hours teaching me to sew and to do many other crafts. She also loved fashion; she had massive amounts of beautiful clothes and she left many of them to me along with all her sewing supplies. My grandpa was very hard-working and owned many businesses. He passed these qualities on to me.

For the next nail I chose Danny’s and my parents. My parents have always encouraged me and let me be whoever I wanted, no matter how crazy. They taught me to garden, which is a huge passion of mine. Danny’s parents also love gardening and they got me out of my picky eating comfort zone. They are always there to lend a hand when we are in need. Danny and I each have a sister. I chose a yellow friendship rose to represent my sister and recreated a piece of Danny’s sister’s art. They both have amazing families; our nieces and nephews mean the world to us! We also have two of the funniest brothers- in-law alive. I of course treasure our wedding day. I also included our fur baby Grizwald and gave him an old-school twist.

The last nail features my grandma and grandpa White. My grandma White passed when I was in the first grade. I wish I had more time to know her. What I do know is that she was an amazing knitter and we have many heirlooms of her beautiful work. My grandpa White also had his own business so I guess the entrepreneurial roots run deep within me. He was a very gifted drawer and we spent many hours drawing together when I was a child. 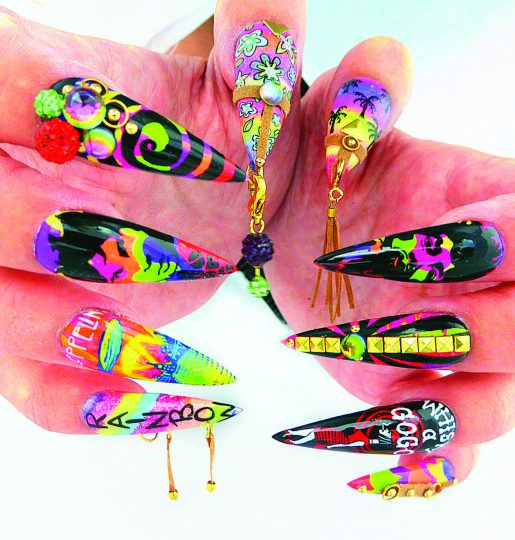 I’ve never been to the Sunset Strip so I needed to familiarize myself with the legendary street. I Googled and watched movies and even listened to podcasts. You can’t talk about the Sunset Strip without talking about music. My favorite era for the Sunset Strip would have to be the late ’60s and early ’70s. This is when rock was in its prime! I grew up on the music of Led Zeppelin, The Rolling Stones, Jimi Hendrix, The Doors, and pretty much every other amazing rock band from that time. My dad is a big rock fan and through osmosis I’m sure, so am I. I love the wild guitars, super long instrumental breaks, and dark themes of this time period. All my favorites graced the clubs and famously partied in the hotels on the Strip. The Doors at one time even headlined at the Whisky. Jimi and Zeppelin both played at the Rainbow. How amazing it would have been to see the Strip then! The crowds were so wild they had to have a curfew in place; police and security were everywhere! For my set I did a ’60-’70s rock, Sunset Strip, Cali, flower power, club theme.

I chose Orly’s Adrenaline Rush collection as my color palette. It was perfect for making this psychedelic set come to life. I added Jimi, and Jim’s and my favorite Led Zeppelin album cover “Celebration Day,” which I bedazzled with disco balls and of course leather tassels, which were huge back then! Both of the big dangle charms are detachable, to make this set totally wearable. I would love to go to the Sunset Strip one day! And I would totally rock these nails to the Rainbow for dinner and then off to the Whisky at night! I had a lot of fun with these nails and I hope they reflect that.

Click here to see a step-by-step tutorial of how Deanna created these nails. 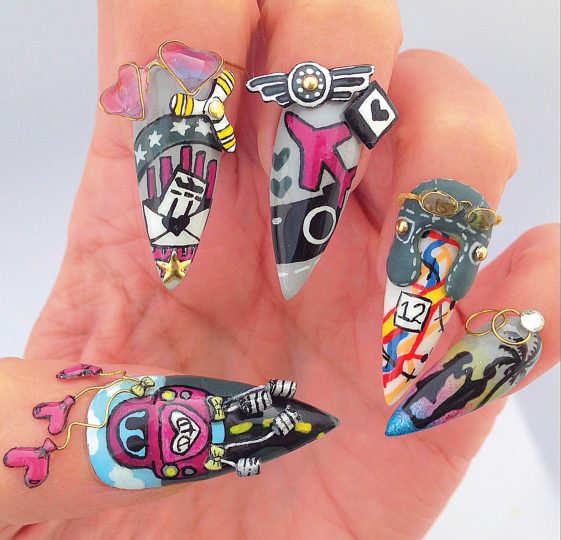 When I saw the ad for Gelish’s new collection, Sweetheart Squadron, I fell in love! I love the aviation theme and and the industrial-style colors are great for fall. Also the name of the collection reminded me of my sweetheart! Super cheesy I know! I cant help feeling a little cheesy because my boyfriend of nine years and I just recently got married. We decided to postpone our honeymoon so that I could compete in NTNA. He’s such a good sport and my number-one supporter. So here we have it, my inspo: mission honeymoon! Using all the tactical precision of an aviator, I construct my latest mission assigned to me by Gelish and NAILS. I flew into the wee hours of each morning this week to complete this special operation in hopes of one day compromising on a top secret honeymoon location and pleasing the nail world’s ground control. We have yet to land on a location but a decision is on the horizon. Our honeymoon and aviation inspire this travel-oriented task. I hope you enjoy it as much as I did! But there’s no rest for my fuselage as it’s on to the next mission for NTNA headquarters!