I would have started with an equal ratio of pedicure stations to manicure stations. I wound up putting two of the manicure stations into storage and replacing those with two pedicure spa chairs. It was an expensive fix; an entire wall had to be ripped out, plumbing had to be rerouted, tilework had to be redone, and all of the TVs had to be moved. On the plus side, the changes opened up the floorplan of the salon and made it much easier for my employees to work efficiently. 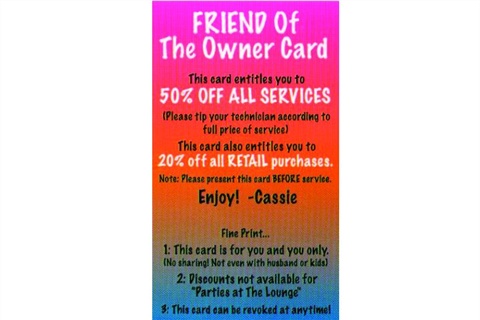 CASSIE PIASECKI former nail salon owner (no longer in the beauty business, in part due to what she would have done differently), Newport Beach, Calif.

1. I spent way too much money on the original building and design of the salon, with items like custom-made bars and chairs and unique flooring, thinking that an awesome design would attract awesome clients.

2. In order to attract more clients, I often offered large discounts on services, and I’d wind up taking the loss (I didn’t want to take commission away from the nail techs). For instance, when I gave out a coupon for 50% off services, I’d lose all of my percent of sales, since I was paying the techs 50% commission. Those giveaways cost me a lot more money than I made from the clients who became good customers.

3. Because good nail techs were hard to find, I often overpaid techs to get them to work for me.

4. I never got a nail license, choosing instead to focus solely on management.

1. I would have stuck with tried-and-true furniture and design. It’s possible that the custom design attracted a few design-savvy clients, but I could have achieved the same success with more mainstream design ideas.

2. I would have kept in mind that I’d be the person paying for supplies, front desk, and other overhead expenses. So, I wouldn’t run giveaways where I wouldn’t at least be making enough of the service to pay for a portion of those costs.

3. Again, I had problems calculating the true cost per service. (I often overlooked items like rent, credit card processing fees, and towels used; instead I looked only at supplies.) What I should have done was calculated the true cost of service and offered corresponding compensation.

4. I would have gotten my nail tech license, so I could step in when a tech called in sick or we got super busy! 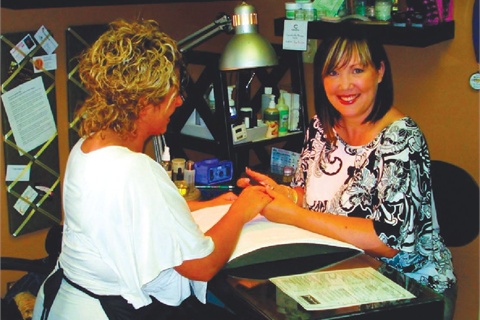 I was so busy trying to move onwards and upwards that I forgot to just enjoy the moment. In addition to owning a salon, I opened a nail school and a supply company. By the time I realized I’d taken on too much, it was too late to change.

I would have stuck to working behind the nail table in my salon and not stretched myself so thin. I enjoyed teaching and reaching for broader horizons, but I forgot to appreciate how much I enjoyed doing nail services (for the creative and social outlet) and being part of the team environment in the salon setting. The decisions I made set me back a couple of steps. But on a positive note, in life I think we often have to take two steps forward and one back; in the end, we are still moving forward. I did learn the valuable lesson of living in the moment and to “do what you love and love what you do.” I’m a firm believer of “everything happens for a reason” so I’m looking forward to seeing what new opportunities are in my future that may not have come if I hadn’t taken those steps.

I moved my salon into my home and didn’t move my unique pedicure setup — an elevated platform and a Hungarian baby bath — to my new salon because I didn’t want to put holes into the floor. I opted to use another type of pedicure chair, but it’s not ergonomically friendly. My back bothers me now.

I would have the client sitting higher in relation to where I’m sitting, like the set-up in my former salon, to alleviate the stress on my back. I’m still trying to figure out how to improve my current pedicure set-up to make it more ergonomically friendly.

I went into business with a business partner who wasn’t a good fit. As the one-year contract ended, I had to make a lot of stressful adjustments as I needed to transition to a different salon.

I am still optimistic about partnerships, especially because I think it’s a good fit for my lifestyle. But next time I will use my network to find out more about the integrity and reputation of a potential partner, including ensuring the person has a state board cosmetology license (if performing services), a business license, and insurance. I will also set clearer boundaries about who would take the lead on projects such as recruiting, training/orientation, ordering supplies, salon cleaning, and laundry.

I ran into a lot of building and design issues by trying to design my salon without professional help. First, I opened my salon doors without enough lighting. Trying to do hair color in the dark is difficult! (When I remodeled, I installed an overkill of lighting to prevent that.) Flooring was another huge problem. I chose laminate wood flooring, which proved to be hard to maintain in such a high-traffic area. I also didn’t realize laminate flooring comes in two finishes; I chose the matte, without realizing I could have chosen glossy. I tried to fix the problem with wax, which just made it worse. I also ran into plumbing problems, which caused three inches of standing water to flood the salon floor. The floor’s seams warped and bowed up, and, since I had just opened, I couldn’t replace the floor right away. I also chose a paint that, while beautiful, couldn’t easily be cleaned. I scrubbed the paint right off the wall trying to clean off marks.

I would have hired a professional to design the space for me. Some other design tips I’d pass along are to make sure you allow space for storage, extra electric outlets, phone jacks, and a break room/kitchen area.

Three Tech Trends to Enhance the Client Experience in 2020

When you hear “technology,” what comes to mind? Computers? Apps? Gadgets?

People are getting more and more creative when it comes to shamin people’s nail work and it has starting to damage the industry in the way that people lose their passion or get too afraid to post their work on social media at all.

If you can build a small yet dedicated following on social media, you could become a “micro influencer,” gaining exposure, growing your clientele, and building your brand.

Beauty experts took a deep dive into compliance for owners. The event was sold-out.

Get To Know: Joanne Sorbello

Crowdsourcing: What does the future of the nail industry look like to you?

This month we asked nail techs: What does the future of the nail industry look like to you?

Meet nail tech an stand-up Angela Thorson. Despite meeting some challenging experiences along life’s journey, Angela continues to look on the bright side and keeps her community — and often her clients — laughing as well.

Buying Salon Software? Here’s What You Need to Know

If you're a nail salon owner and looking for a new salon software...consider this.

The CEO and founder of online and mobile platform Beautician List, nail tech Dasha Minina wants to raise the standard of professionalism in our industry.

You can begin your career as a salon owner in the black: Start saving early, do your research, hunt for bargains, and keep overhead low.

Julie Kandalec is the real deal in the nail world. She has done just about everything as a celebrity manicurist including fashion week, editorial and advertising campaigns and red carpet. Here she gives her top tips on working with celebrities as well as some of her favorite (and not so favorite) moments in her 20 year journey.

Salon management software keeps your client information and financial data safe and secure while reducing the risk of fraud and theft.

Create Your Ideal Salon Space with Guidance from a Design Pro

As a salon owner, you know that great service isn’t the only reason why clients choose where to get their hair done. It’s the environment and ambiance of the salon from the moment they walk through the doors. How do you create that memorable experience?

Modern Luxury: Does Your Salon Space Have it?

When was the last time you entered a business and felt a sense of bliss and peace the moment you walked in the door? Michele Pelafas, a leading interior designer in the spa and salon industry for more than 20 years, says the modern definition of luxury encompasses much more than furniture and finishes.