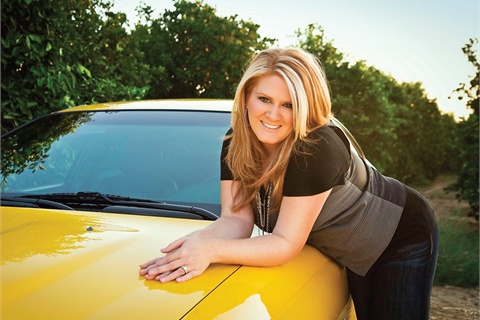 “I get quite a few crazy looks when I pull up to the staging lane in my pink glitter helmet ready to run at 110+ miles per hour,” says Lacie Sharp, a manicurist at Mystique Salon in Bakersfield, Calif., and weekend drag racer. “The drag racing that I participate in is a 1/4-mile race starting at a light. Your time starts as soon as your car moves and ends when it reaches the quarter mile mark. Most of the time I race for low ETs (elapsed time).”

Her vehicle of choice at the moment is a 2007 Chevy Trailblazer SS. “It’s an SUV so I get lots of funny looks,” she says. “It’s got a 400 horsepower Corvette engine with a 125 horsepower shot of nitrous oxide. It’s not the fastest car I’ve ever had (I’ve had six others), but it is the most fun and gets the most attention.”

Her fastest time, so far, in the SS has been 12.65 seconds at 110 mph. “To put it in simpler terms, it’s zero to 118 mph in less than 12 seconds,” says Sharp, who limits her racing to a controlled environment and does everything in her power to be as safe as possible.

An addict since she began racing her Ford Mustang at age 16, Sharp can barely contain her enthusiasm: “I love everything about drag racing. I love the rush of excitement and nervousness when lined up against someone. I love the gripes from the boys when they lose to a girl in an SUV. I love the smell of VHT and burning tires. And I love the yummy little corn dogs you can only get at the race track!”

Press-On Nails Are Here to Stay: How Manicurists Can Make the Most of It

Nail educator Tracy Vinson shares how to ride the wave of press-on popularity and how an entrepreneurial mindset can help you bring in business.

The Suite Life: Photo Tour of the Nail Artelier by Julie K

This bijoux space offers a private experience featuring a range of high-quality nail services.﻿﻿﻿﻿﻿﻿﻿﻿﻿﻿ See the beautiful deco design and the selfie wall!

It’s easy to forget that the real reason a client is in your chair is to get their hair, nails, or skin done. There are three items I would never share with someone I see every six weeks for a paid service—no matter how cool they are.

What Is Clubhouse? How Salon Pros & Businesses Can Build a Following

This audio-chat app has the world talking, and there are some unique benefits for the salon industry.

We’re on the hunt for the most gorgeous, innovative, luxurious, surprising salon bathrooms! The online Bathroom Battle application is live now, and the deadline is April 23, 2021.

The Sweetest Little "She Shed" Salon

Welcome to Holly’s Hair Salon where “I literally giggle to myself some mornings and think how blessed I am that this is my work life now. It’s an amazing feeling.”

WEBINAR: Are You Pricing Your Services Properly?

On March 22, we will be joined by Tracy Vinson @mobilemanicurist to help nail technicians get on the right path with their business by looking service prices and how to add value to every appointment.

The Mobile Manicurist: An Interview with Tracy Vinson

Vinson, the creator of "Bankrupt to Booked Up" will join NAILS for a free webinar on business-building for nail techs. Here, Vinson talks to NAILS about how she started out as the Mobile Manicurist and quickly built a clientele.

This online education platform will provide vital tools for both professionals and hobbyists seeking accredited experience, and allow students to professionalize their creativity.

Washington's too crazy for me—that's what I always thought, until Covid hit me. And that's when I started paying more attention. Read on for some of the proposed budget plans that could offer some relief to salon pros.

On Friday, February 12, 2021, the IRS will begin accepting and processing 2020 tax year returns. Get a jump on things with these tips for making the process easier and more efficient.

Going to the nail salon has become a beacon of brightness in an otherwise complicated world. Guests anticipate the same delightful service and they deserve the cleanliness and care that comes with a pandemic-prepared salon.

Pivoting in a Pandemic: What I Learned While Taking My Salon Mobile

When the pandemic hit, I converted my business to a mobile salon. After a year navigating personal and professional hurdles, staying adaptable has been my magic sauce for success.

How One Salon Is Innovating Customer & Worker Safety

They have the attention to detail, their clients already trust them, and adding brows to the nail service ticket can sometimes double it.