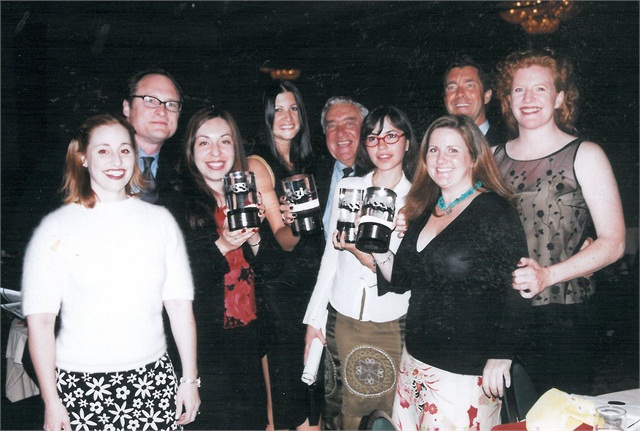 NAILS was thrilled to win four Maggie Awards this year, doubling our total previous wins at one fell swoop. The Maggies, presented by the Western Publishers Association, are given to outstanding magazines published west of the Mississippi River, honoring editorial, design, and promotion excellence. At this year’s 51st Annual Maggie Awards, NAILS took top honors in the following categories:

Best Supplement (Trade or Consumer) for our NAILS & Feet supplement to the May 2001 issue.

NAILS has won four previous Maggies — one in 1993 for best Trade Magazine, two in 1996 for Best Editorial Layout and Most Improved Publication, and one in 2001 for Best Health, Beauty, or Fitness Trade Magazine. This year’s awards bring our grand total to eight. The 2002 Maggie Awards received more than 1,800 entries; other winners this year include Shape, PC World, Road & Track, and Islands magazines.

VOESH will preview its 2020 Holiday Collection as part of its #VOESHLOVE Virtual Trade Show. Virtual workshops will inspire, educate and prepare salon owners and nail technicians for the future.

In partnership with Zenoti

How These Salons Build Trust, Attract Clients Despite COVID-19 Realities

“We have found that customers are ready to adopt touchless check-ins and check-outs. They appreciate the simplicity and convenience. And they also understand how it helps everyone maintain health and safety guidelines during COVID-19.”

The flexibility of its monthly memberships and the generous support of its clients helped keep the Hammer & Nails franchise strong during the pandemic, even through the shutdown.

Planning Your Future: Is A 401K An Important Perk?

Getting employees to appreciate the importance of THE FUTURE with a 401K plan is the goal of Arik Efros, co-owner of the Eva Scrivo Salon. Efros outlines the importance of this perk and explains why many of the people in their NYC salon have already a nice bundle waiting for them upon retirement.

The beautiful collection of minimally inspired design focus on the junction between modern luxury and form.

While the single use nature of PPE protects the health of your clients, it produces quite a bit of waste for a salon--and waste that can contaminate a space. Green Circle Salons helps salons with a new recovery and recycling program that keeps team members and guests safe while reducing the impact on the planet.

Kandalec is releasing a self-published nail art book for both consumers and professionals alike on National Nail Polish Day (June 1).

Learn to utilize your attention, time, and money effectively.

Why I Became a Nail Professional

Registered nurse Jessica Johnson shares why she went from DIYer to nail professional.

A Discussion About Residual Income

An Overview of the Current COVID-19 Disaster Loan Programs

Three Tips for Pivoting From Service to Retail

Now is the time to pivot and lean into retail to get much-needed income, but how?

Level Up Your Financial Smarts With Qnity