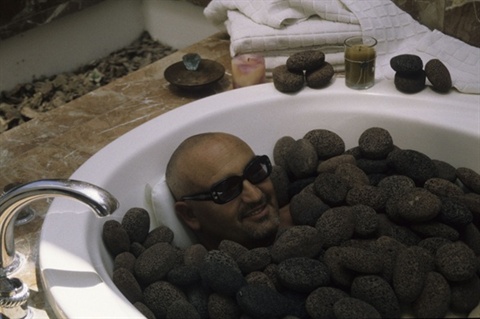 On a trip to the Far East in 2000, Tony Cuccio spotted a lava rock in Japan and had an idea. The lava stones were rough enough to act as pumice stones, yet their smooth texture and naturally ergonomic shape made them seem a natural tool for salon manicures and pedicures. Cuccio's confidence in the potential of "the rock," as he was calling it at the time, was so complete he purchased 30,000 on the spot from a rock quarry and had them shipped to the States in ocean-bound crates. The rocks, while not fragile, are shipped in a flat box of eight, carefully laid out. As the rocks were making their way overseas, Cuccio began the hard task of naming his newfound treasure. After reject­ing numerous names including "The Pet Rock" and "Chia Rock," he decided on The Earth Stone Lava Pumice. Cuc­cio called a few of his key dealers and pitched them his new product. "I sent them information on the pedicure market, and with all of the new pedicure lines coming out, they knew the rock would be the perfect accessory," ex­plains Cuccio. "Everyone who touched the rock loved it. It's natural pumice and made up of basaltic lava, which is rich in magnesium, iron, and oxygen. As the hot lava cools, the porous texture is formed and this texture is what makes the removal of dead skin so easy. The orders start­ed pouring in.”

To date, Cuccio has sold a quarter of a mil­lion rocks, a success he says rivaled only by his launch of Cuccio Pedi Slippers three years ago. Says Cuccio on why the rock has quickly become so popular: "I studied the nail market and found something different that was mar­ketable and that was needed." Rock on.

How to Pick a Perfect Salon Layout

Whether you are just pondering a salon layout change or you are in the middle of a salon renovation, we hope this article will help guide your direction. A salon layout that accommodates its guests and stylists will help business boom while keeping employees and clients happy.

7 Ways to Make Easy Passive Income as a Nail Tech

Passive income is income that requires little to no effort to earn and maintain, and in today’s video we’ll be going over seven ways to make easy passive income as a nail tech.

American Express is helping salon owners get their businesses back on track with tips, tools, discounts and more.

Established in 2020, Chào Nail + Bar is offering an eco-friendly atmosphere that delights the senses and brings joy to the body, mind, and spirit.

A salon owner has a lot on their plate that employees know nothing about. It's important that the owner is not so busy working IN their business, that they can't work ON their business. Here's how one owner started to free herself up.

In a world where everyone loves to give an opinion, why ignoring some of them can be the best thing you do. Business consultant Phil Jackson from Build Your Salon, discusses how not all opinions count.

A well-executed beauty salon or spa interior design can communicate and reinforce your brand message and pave the way for a more enjoyable business experience. Here are five trends and the images that illustrate how they come to life in a salon space.

Building a Brand Through Social Media

When Choosing a Nail Salon for Their Next Pedicure, Here's What Clients Are Told to Look For

As sandal season gets underway, here is what the California State Board of Barbering and Cosmetology advises consumers to look for when selecting a salon for their pedicure service.

Design the Perfect Salon Studio to Align With Your Brand

"Moving from a traditional salon to your own studio can be overwhelming, but it doesn't have to be. No salon was EVER built in one day." Bianca Margolis shares how she figured out her vision for her salon and her business.

Here is how five salons are publicly communicating their policies after the CDC issued an update to mask guidelines.

NAIL FILES: How This Nail Salon Owner Revamped Her Business to Attract More Clients and Technicians

We often see the words “luxe” or “high-end” attached to many of sophisticated salon names. But what about little vintage salons that used to be all the rage? Meet Julia Paul in Windsor, Virginia who “inherited” a back-in-the-day salon, and is trying her very best to bring the location into the twenty-first century.

Press-On Nails Are Here to Stay: How Manicurists Can Make the Most of It

Nail educator Tracy Vinson shares how to ride the wave of press-on popularity and how an entrepreneurial mindset can help you bring in business.

The Suite Life: Photo Tour of the Nail Artelier by Julie K

This bijoux space offers a private experience featuring a range of high-quality nail services.﻿﻿﻿﻿﻿﻿﻿﻿﻿﻿ See the beautiful deco design and the selfie wall!

It’s easy to forget that the real reason a client is in your chair is to get their hair, nails, or skin done. There are three items I would never share with someone I see every six weeks for a paid service—no matter how cool they are.