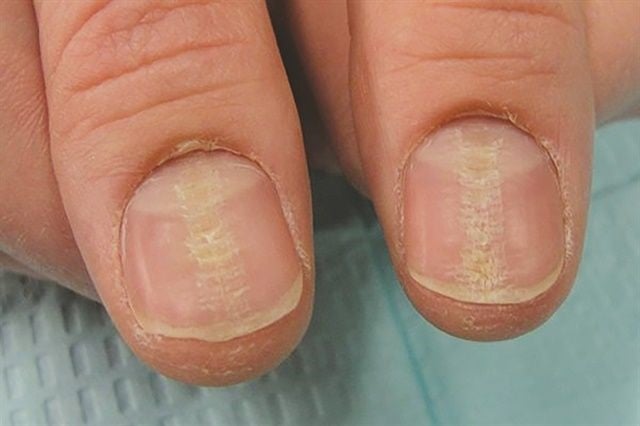 You are describing habit-tic deformity: an acquired habit-induced condition of the nails secondary to the repetitive habit of picking or pushing the cuticle of the thumbnail back. You can see a series of parallel, transverse depressions along the central access of the nail plate in a so-called “washboard” configuration. Additionally the lunula is often enlarged. There is always a ragged or absent cuticle and people many not be aware of the habit. Any repetitive trauma to the cuticle can ultimately result in the abnormal outgrowth of the nail because the cuticle directly overlies the nail matrix and the nail matrix is what becomes the actual nail. Therefore, overly aggressive cuticle removal or even pushing back of the cuticle can, when repetitive, affect the cosmetic appearance of the nail.

Effective treatment of habit tic requires an individualized approach. The first step is to determine whether the habit is a conscious behavior. Most people with habit tics are aware of their actions, but simply don’t know how to break the habit. As with any habit, you need to be motivated to stop the behavior. The next step is homing in on when the tic is most often occurring. It’s often during a lull in activity during the day, such as sitting in traffic, attending a meeting, sitting at the computer, or watching television. Keeping a diary for a few days to establish a personal pattern can be very helpful. Once you have a good sense of the times when you are tempted, you need a plan to divert the behavior.

Everyone’s method for diversion differs. Wearing a rubber band around the wrist and playing with the band during tempting picking times can be effective for many. Some use squeezy balls or cover their nails with Band-aids. Keeping a photo close by of someone who motivates you can also be very effective. These methods are all part of the behavioral modification aspect of conquering the habit, but treatment is also required.

In 2012, a case report was published in The Archives of Dermatology entitled “Inexpensive Solution for Habit Tic Deformity.” The article showed incredible treatment success by having the patient apply superglue (cyanoacrylate) to the cuticle twice weekly for three to six months. This method makes a lot of sense, as one of the biggest issues with habit tics is compromise to the cuticle.

By applying the glue, you are essentially recreating the cuticle artificially. The glue also serves as a reminder to not engage in the habit. At times, if there is also very significant swelling and bogginess (a spongy texture) at the proximal nail fold (skin behind the cuticle), a prescription anti-yeast cream and steroid or injection of a small amount of steroid into the nail fold will also be helpful. Many patients improve dramatically with a combination of behavioral modification and superglue alone. Sometimes patients benefit from seeing a cognitive behavioral therapist.