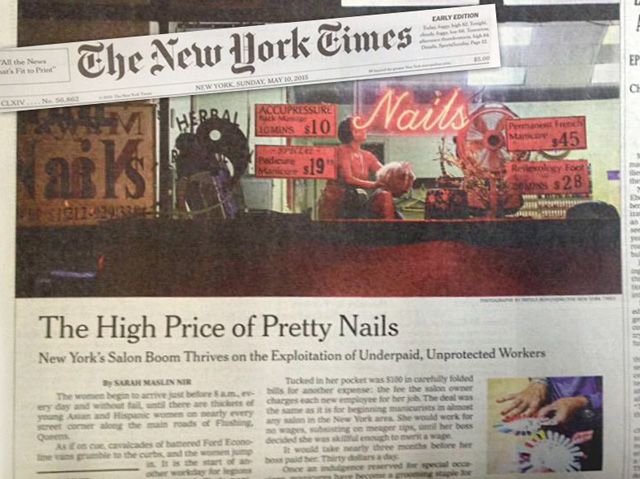 The recent New York Times story about exploitative practices in some New York area nail salons was deeply disturbing. The conditions outlined and the treatment of people described in the article are an affront not only to every rule-following, employee-respecting salon owner, but to anyone with a working heart. While the problem may be limited to a particular part of the country, it shines a light on a problem that occurs in many industries: Consumers grow to expect cheap goods and services and don’t think about the real cost, which is low wages, no benefits, and substandard working conditions. And greedy business owners pull the maximum profit out of their businesses, even if it means treating their workers unconscionably. The number of services some of the salons cited in the articles was alarming. One nail technicians said she did upwards of 30 sets of acrylic nails a day. Even working at a pace of the fastest and most experienced nail technicians, that would mean a 15-hour work day, and that is wrong.

Most licensed professional nail technicians and salon owners would love nothing more than to see the ouster of these exploitative owners. They hurt fellow nail technicians, they bring shame to a vibrant industry that puts $8.5 billion into the U.S. economy and employs several hundred thousand workers, and they cause the public to question our entire industry.

As a trade magazine dedicated to the professional nail industry, we applaud Governor Cuomo’s quick action, though we take some issue with the specifics of it. We believe there are ways to rectify the issue by simply enforcing laws already on the books.

We’re happy that The New York Times researched the topic so deeply and thoroughly. The article will surely help the consumer make smarter and more conscious choices when deciding where to get her nails done.

All nail technicians should be trained and licensed; it’s the law in nearly every state. Yet every few years, states will take their vocational boards under review to determine whether they are still “relevant” (what is called sunsetting). It’s usually around this time that you’ll hear some state senator mockingly ask why people need a license to paint fingernails! Yet the problem with the state regulations is not whether the industries need a licensing board, it’s that there needs to be increased oversight on industry practices and, obviously, much greater enforcement. We studied the ratio of state board inspectors to the number of salons a few years ago and singled out several states for praise that had a low ratio and that had de-incentivizing fines. But in many states, salons won’t see an inspector for years, and even when they are cited, the fines are so small, they’re merely a nuisance instead of a deterrent.

The best way to effect change is first for consumers to vote with their pocketbooks. Just as many consumers have resisted the lure of bargain retailers when the true story of how they treated their workers came to the surface, it’s just as important not to support establishments that are exploiting their workers. Sadly, many of those workers, who never should have been working in a salon in the first place, will lose what meager wages they currently earn. But no wage is worth being treated the way these workers were.

We want our readers to remember to focus on the good things that consumers can do to put an end to abuse.

There are just a few very simple things a salon client should look for when choosing a salon:

> Are the nail technicians licensed? If there is any hesitation at all to showing a client a license (which is supposed to be displayed in plain view), turn on your heels and leave.

> Is the salon clean? A nail technician should start every service with a clean set of tools, a clean towel, and a clean workstation. If you can see fingernail clippings on the table and the tools are soaking in a sludgy jar, find your way to the door.

> Low prices are not necessarily an indicator of a low quality salon. A $10 manicure is usually just a basic affair, and often a salon’s “loss leader.” But just as you do with waiters, cab drivers, and others you know rely on tips, it’s customary to tip a manicurist 18%-20% or higher if the service is special.

> English is not an element of whether a salon is good or not. Plenty of very talented and experienced nail technicians speak minimal English, but you should be able to have your questions answered satisfactorily by the salon owner or a nail technician.

> Protective gear such as gloves or masks are not an indication that dangerous products are being used. It’s smart practice for nail technicians to use protective gear.

> A small amount of odor is to be expected during certain services, but an overpowering odor is a sign of poor ventilation and may indicate a lack of concern about workers’ health.

We are all in this together: We're in the professional nail industry, we are working women (mostly), and we're caring people who believe that all workers should be treated fairly. I'll be sharing more thoughts on second part of the NYT story about salon workers' health issues.

Here's the Most Shocking Thing a Client Ever Said to Me

Giving new meaning to "oversharing," we hear from nail technicians who have had some jaw-dropping moments in the nail salon, courtesy of their clients.

Understanding Your APR Can Help You Start Recession-Proofing

In our latest Finance Friday video installment, we come to understand the importance of knowing your APR or Annual Percentage Rate on borrowed money and credit cards.

And, yes, you do have assets. In this latest Finance Friday video, Anna Manukyan, Ulta Beauty senior director, education and creative, and a financial educator, talks about some key terms --and actions--you can take to make sure you keep making smart money moves.

The Road to Independence

Learn from those who just recently went independent, as well as those who have been doing it for years, what it’s REALLY like to take the leap to becoming an independent salon professional.

With a wine bar and a dedicated events space, Sandals Nail Spa can cater to community and private events. Check out our Nail Salon of the Year, located in Sylvania, Ohio.

Make Your Money Work for You: Understanding Bull vs Bear Markets

Ulta Beauty's Anna Manukyan breaks down financial terms and explains their relevance. These short nuggets of education are digestible, understandable and relatable, because she has made it her mission to "give you the power to protect your income, life, health, and wealth." Here's the latest in the series.

To the question, "What is one piece of advice you'd give to someone who is just starting out and newly-licensed?" there were many great responses.

When it comes to the interior design of your nail salon, choosing equipment that is high-quality and cohesive with your aesthetic is key. The look and décor of your space is the first impression clients will have of your business, so it is important to ensure your nail salon’s style is as polished and refined as the nail services you provide.

Avoid These Red Flags When Filing Your Taxes

Advice for the independent beauty professional on what you can reasonably deduct and what you generally cannot. As always, seek the advice of your own tax preparation professional for your personal tax needs.

The Salon Pros' Guide to Inflation

Even when you’re flush, I hope you still watch your pennies. Money isn’t everything; however, not having cash on hand forces you to make choices you don’t want. Here are the critical items to living with inflation for salon professionals.

Make Your Money Work for You: The 5 Questions to Ask a Financial Advisor

You wouldn't start a hair service without a consultation, right? Well, asking the right questions of a financial planner will help you get on the same page with them so you can get your money working for you!

Announcing the 2022 Salons of the Year Finalists

SALON TODAY is proud to announce the 20 finalists in the 2022 Salons of the Year competition.

Booksy Unveils its 2022 Campaign "Get Discovered"

Expert advice from Boulevard's director of education on the question of whether or not to switch to an hourly rate structure.

Make Your Money Work for You: There's Still Time to Save More Money