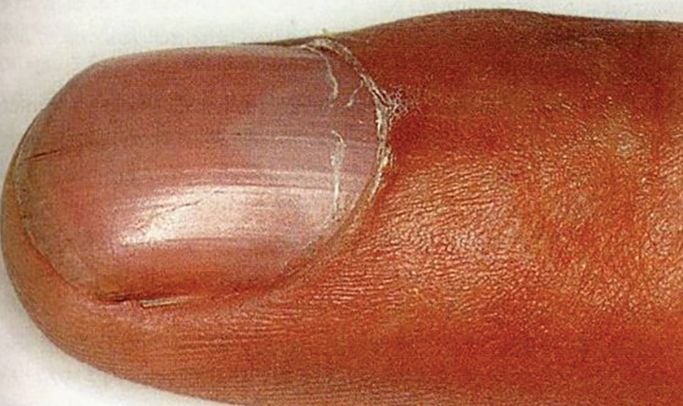 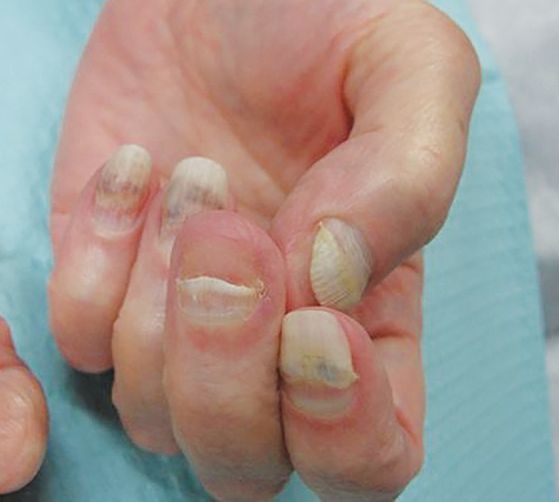 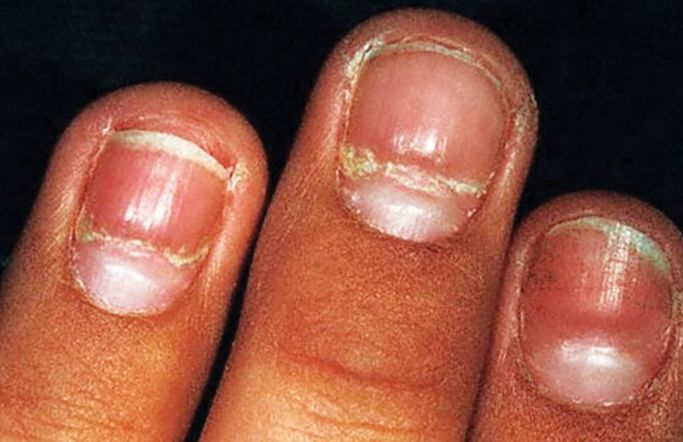 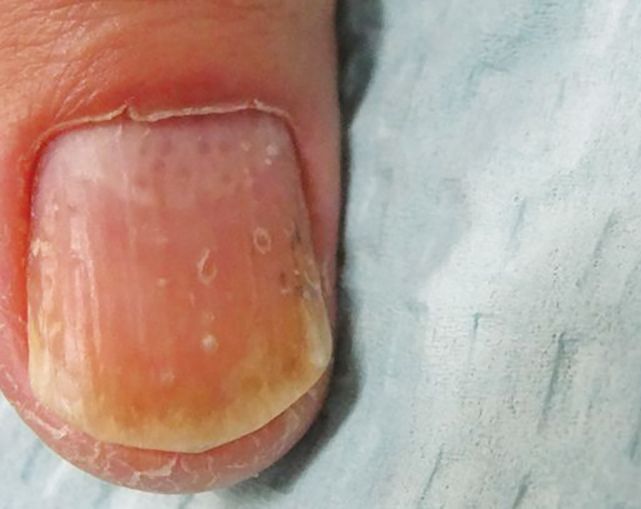 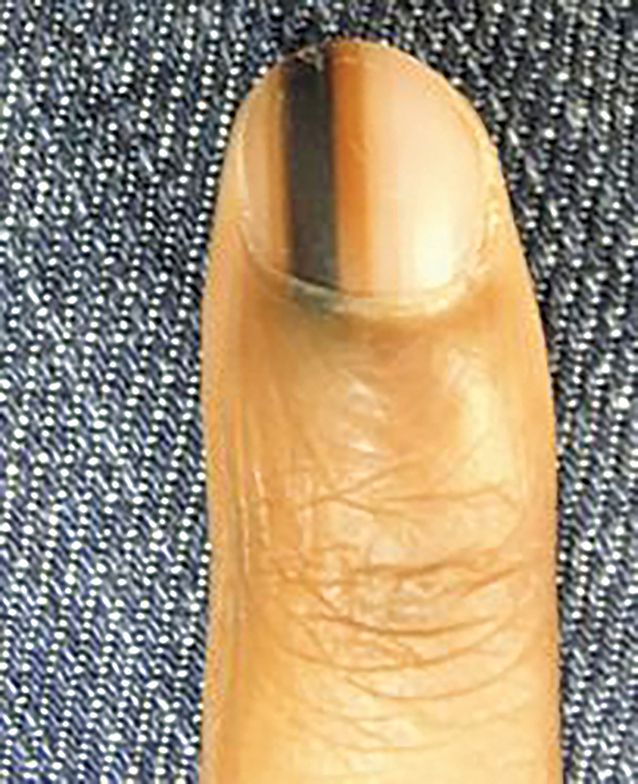 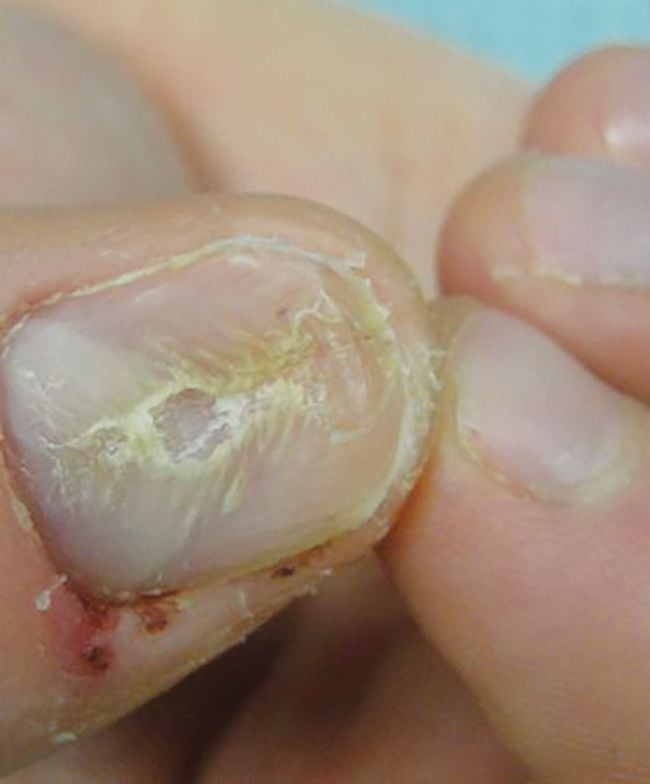 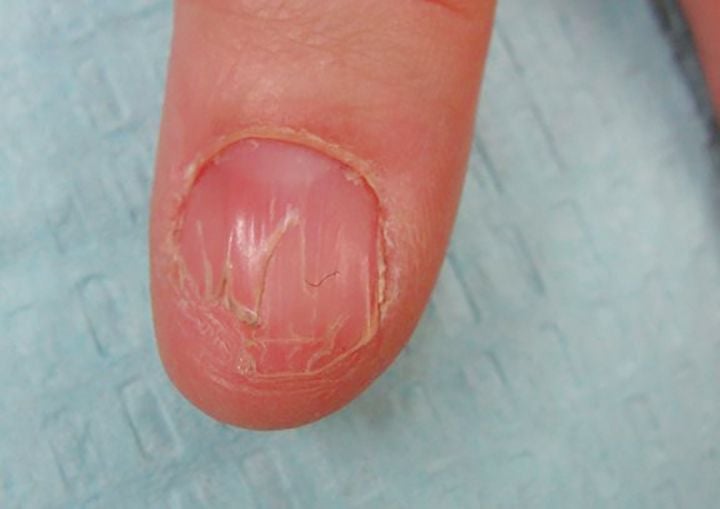 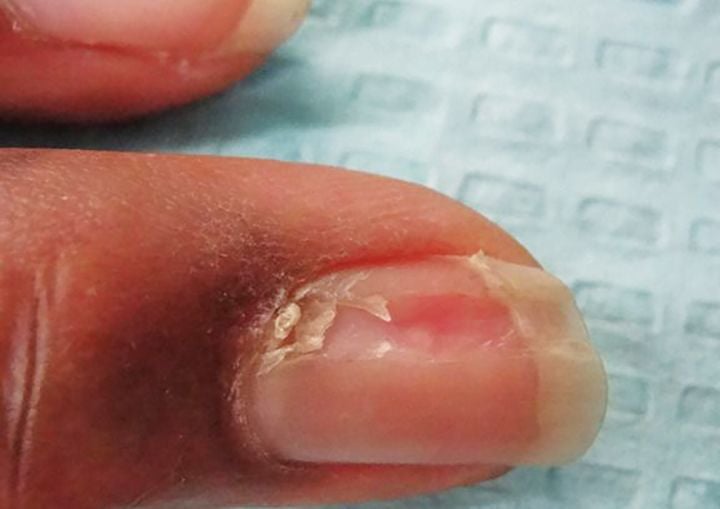 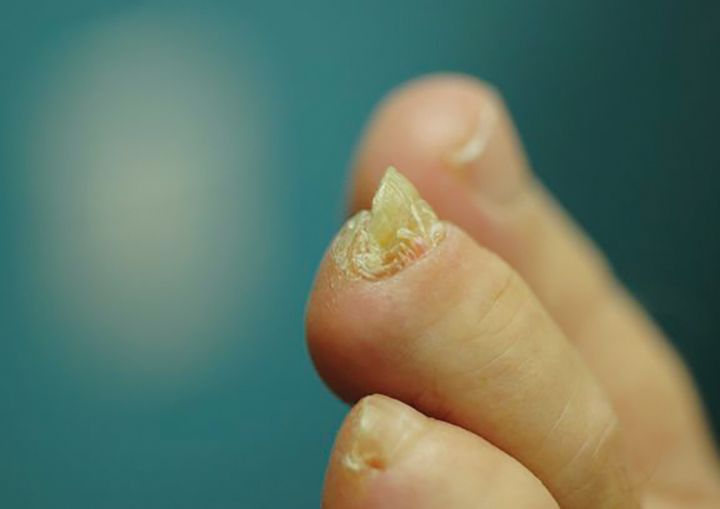 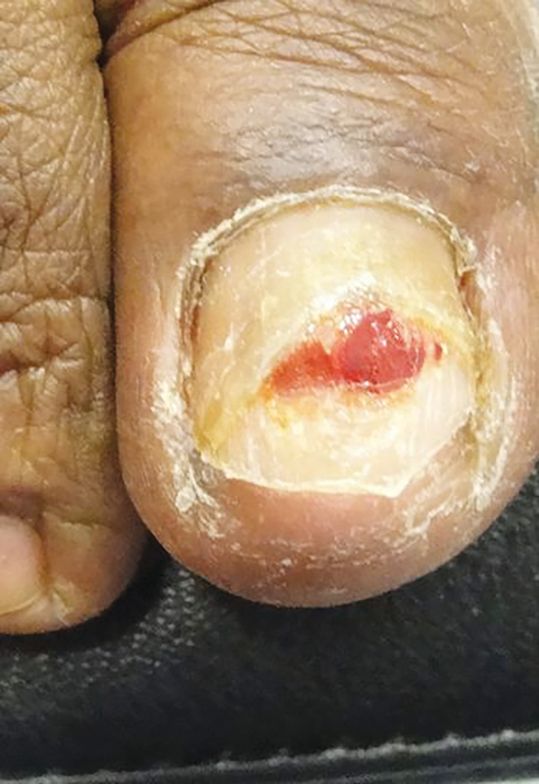 *This article has been updated from an earlier version.

This month, I thought it would be fun to test your knowledge of nail disorders. Some of these conditions are quite unusual, so don’t feel badly if you don’t know them at first glance. My hope is that you will learn some new nail diagnoses and know when it is appropriate to refer your client to a physician.

1. Nail Patella Syndrome is an inherited, autosomal dominant condition [meaning it can be ingerited from just one parent] that can result in bony abnormalities, including an absent or small knee, hyperextensible joints, as well as eye changes, including cataracts and glaucoma, among several other porential clinical features. The nail changes are very distinct and unique. The classic nail feature is a triangular lunula (the normal half-moon appears triangular instead of rounded). This nail feautre is often what tips off the disgnosis, so it is important to recognize.

2. Koilonychia, also known as spoon nails, appears concave so that you could imagine a frop of water filling the nail plate as if balancing within a spoon. When the nails develop this feature, it is important to assess blood work to look for iron metabolism-related diseases. The most common association is iron deficiency anemia, but there are other more obscure entities associated with spoon nails such as hemochromatosis. Raynaud's disease can also cause these nail changes.

3. Hemorrhagic Onycholysis is a condition that is usually associated with a specific type of chemotherapy. The nail are not only lifted or separated off of the nail bed, but they develop bleeding (hemmorrhage) under the nail as well, This condition can be extremely uncomfortable for the patient and requires medical attention. It is important for cancer partients or any person who is imunisupressed to be especially cautious about infection risks. Any client with separated nails should seek treatment by a dermatologist and avoid nail cosmetics until the problem is completely resolved.

4. Beau's Lines are transverse [horizontal] despressions in the nail plate that represent a period where the nail stopped growing. The nail can experience a cessation of growth due to a stressful event or illness. In recent years, there has been a strain of Coxsackie virus that causes this phenomenon relactively commonly in children who hace the virus. The nail will develop an indentation and often subsequently shed. A new, normal nail will replace the abnornaml nail.

5. Red Spotted Lunula is a feautre that hasa been associated with several different conditions iuncluding psoriasis, lichen planus, and alopecia areatea. The features are very distinct: The normally white lunula appears to have pinpoint red dots throughout. The ecample shown here is a case of nail psoriasis where other features include pitting and oil spots, all of which are consistent with nail changes associate with psoriasis.

6. Nail Melanoma is a rare type of cancer that can occur within the nail unit. Just like the skin, the nail has melanocytes. The nail can also at time develop a mole which is a nested cluster of melanocytes. Rarely, when moles start to grow in an atypical, uncontrolled fashion, they can progress to become melanoma, a serious potentially deadly form of cancer. A new brown-to-block, pigmented band on a single digit in an adult should be evaluated by a board-certified dermatologist.

7. Habit-tic Deformity is an acquired habit-induced condition of the nails resulting from the repetitive habit of picking or pushing the curticle of the thumbnail back. You can see a series of parallel, transverse depressions along the center of the nail plate in a so-called "washboard" configuration. Additionally the lunula (half-moon) is often enlarged. There is always a raged or absent cuticle and the patient may or may not be aware of the habit Any repetitive trauma to the cuticle can ultimately result in the abnormal outgrowth of the nail becuase the cuticle directly overlies the nail matric and the nail matric is what becomes the actual nail. Therefore, overly aggressive cuticle removal or even pushing back of the cuticle can, when repetitive, affect the cosmetic appearance of the nail.

8. Lichen Planus is an inflammatory disorder that can incloce the skin, mucous membranes, hair, and nails, but nail disease most commonly occures in the absence of skin or mucosal involvement. Unfortunately, nail lichen planus tends to have a chronic course and affects quality of life sure to its visual appearance and impairment of manual activity. Cliniical features can vary, but the classic appearance is that of nail plate thinning, as show in the photo. When the disease progresses  rapidly and aggressively, permanent scarring can result.

9. Digital Mucous Cyst goes by many names, including myxoid cyst, mucoid cyst, mucinous pseudocyst, synovial cyst, cutaneous myxoid cyst, periungual ganglia cyst, ganglion cyst, and digital myxoid cyst. It's the second most common nail tumor, warts being the most common. These benign cysts tend to occur between the distal [outermost] joint and the beginning of the nail. As a result of compression on the new nail, the nail plate often develops a longitudinal groove. At time, a clear, viscous fluid will be apparent. The majority of patients who have these cysts also have osteoarthritis of the adjacent joint.

10. Acquired Digital Fibrokeratoma is a benign fibrous tumor that often appears on the hands and feet as a flesh-colored projection. When they arise from the nail, they often appear under the nail fold. Often they occur as a result of trauma.

11. Pyogenic Granuloma is a small, eruptive, usually solitary, friable [crumbly] benign papule [raised lesion] that can occur on the skin, mouth, and nails. When located on the nail, they can appear under the nail, within the nail bed (as in this photo), or next to the nail at the nail fold. They commonly bleed and can be quite bothersome as a result. Pyogenicgranulomas can be associated with pregnancy, trauma, and a number of medications, including certain chemotherapy drugs.

Dana Stern MD, Dermatologists treat skin, hair, and nails. As a board-certified dermatologist and nail specialist, she treats a wide array of nail disorders including nail infections, inflammatory diseases of the nail, cosmetic issues related to the nail, cancers of the nail, and sports-related nail injuries.

Read previous “Day in the Life” articles by Dr. Stern at www.nailsmag.com/danastern.