Tomilynn Rando, co-owner of New Beginnings Salon in Owego, N.Y., knows the nail industry. With over 25 years’ experience, she has held the role of nail tech, educator, salon owner, and event organizer. Trained under Maureen Volpe, Rando was instructed not only in bookkeeping and proper application, but also about the many advantages available to her as a nail tech. Doing nails offers two opportunities, taught Volpe, a way to invest in the lives of people and the ability to be independent.

Rando says through the nail industry she grew from a floundering teenager into a successful business woman. “I’m so grateful, and I try to inspire all new techs I train,” says Rando. “I want them to know the nail industry offers them the opportunity to be self-sufficient. That’s empowering.”

Rando first heard of the modern-day slave trade when she watched the movie Human Trafficking on Lifetime. That movie, along with other documentaries and interviews on the topic, angered and haunted her. “How can this be happening in the 21st century?” she thought.

Rando laughed the first time she was described as a “nail tech abolitionist,” but then slowly nodded her head to confirm the title. “It’s true,” she says. “Human trafficking is happening in nail salons, and I want to raise awareness among techs and clients so we can clean up the industry.”

Kevin Bales, president of Free the Slaves, a not-for-profit organization based in Washington D.C., gives an understandable definition of human trafficking. It’s “the movement of individuals through deception or threats for the purposes of exploitation.”

People can be exploited in one of two ways: for labor or for sex. It’s a global problem not limited by borders, and though illegal, it’s so rampant it appears unaffected by limitations of law. Bales estimates 27 million people are living in slavery worldwide.

The problem isn’t confined to far-off countries across the ocean. It’s a booming business right here in the United States. In 2006, the FBI estimated up to 18,000 people are trafficked into the United States every year. According to Polaris Project, one of the leading anti-trafficking organization in the U.S., these people end up being exploited for labor in agriculture, domestic work, restaurants, strip clubs, and any other industry that lacks sufficient oversight. If it’s not for labor, individuals are exploited for sex. Polaris Project reports three main sex trafficking networks in the United States: domestic, Latino, and Asian.

All traffickers sustain themselves by using force, threats, or other means to control their victims. In the case of labor slaves, victims may be beaten or threatened with bodily harm, deportation, or possibly harm to their family. They are given no freedom, often live and work at the same location, and have little-to-no access to money.

With sex slaves, control is gained by terrorizing and dehumanizing the individual; the common result is a fearful, crushed spirit. While all three trafficking networks use Internet sites such as Craigslist and Backpage to sell victims, there does seem to be distinction as to where they operate in the real world. Domestic trafficking appears at places such as truck stops, street corners, brothels, and strip clubs. The Department of Justice estimates the average age for a girl to be trafficked into the commercial sex industry here in the U.S. is just 12 to 14 years old. A common scenario is for an older man to pose as a boyfriend, win her trust, and then become her pimp. Often the girl still views the man as her boyfriend. The Latino networks commonly use residential brothels, “delivery” services, and “cantinas” as legal cover for illegal activity. Asian networks hide behind escort services, karaoke bars, and Asian massage parlors (AMPs), according to Polaris Project.

Something perked Rando’s interest. Human trafficking hides behind AMPs? It’s so prevalent in the beauty industry it warrants an acronym? Hmm. She went to the computer and Googled “human trafficking nail salons.” With that search, Rando learned the nail industry is being used not as a way to empower women, but as a way to exploit them. She read through some stories:

Amanda Kloer, editor at change.org, reports on women who were lured to America with promises of a job in a Long Island nail salon. The “nail salon” turned out to be a massage parlor where women were forced into prostitution. The salon owner, who was charged with human trafficking, used Craigslist to advertise services. Kloer references a similar story, also out of New York, where owners of Babi Nail Salon were accused of withholding pay and physically abusing workers.

Phillip Martin, senior investigative reporter for NPR in Boston (WGBH), reports of human trafficking in Massachusetts. In Springfield, police raided a nail salon suspected to be a front for prostitution. In Boston, police investigated another salon, also for suspicions of human trafficking. Martin quotes Norma Ramos, executive director of the New York-based Coalition Against Trafficking in Women, “With nail salons ... you can have those women being labor trafficked to work in those salons during the day, and then pulled into sex trafficking at night.”

In York, Pa., Jim McClure of York Blog reports on three people charged with conspiracy to commit forced labor trafficking by forcing two women to work in an area nail salon under the threat of being turned over to immigration. All three pleaded guilty and have been sentenced with fines, probation, or jail time.

Alan Johnson, of the Columbus Dispatch, reports, “a multi-million dollar human trafficking scheme was operating out of nail salons in Ohio.” His report explained that 16 licensees lived at the same address in one case. Workers there were little more than “indentured servants.” 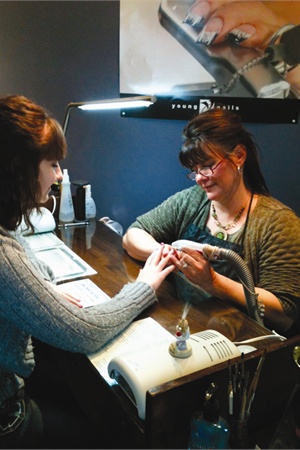 An Activist Is Born

“I’m furious that this is happening in the nail industry,” says Rando. “It makes me so mad to think women are lied to, deceived, brought into the country, and then enslaved. Can you imagine what the woman is thinking? Does she wonder if the clients know, if this is just the way things are in America?” Along with her frustration over the nail industry being exploited, Rando’s concern is for the trapped individual. “I believe God cares for each of the individuals who are being abused,” she says. “It’s important to me that they not only get their life back, but that they know they have value.”

Though unsure of what to do or how to help, Rando decided to do something. She started with what she knew: educating techs. It was January 2011, and she had a regional networking event scheduled for March. That gave her two months to come up with a way to communicate what she had learned.

Rando enlisted the help of her staff and other nail techs in her circle of contacts. Together, they created a flyer to hand out at her networking event and a website that was elementary but sufficient so techs had somewhere to go to continue learning once the networking event was over.

It was a first step, and one that is shaping Rando’s vision into an implementable plan to raise awareness and help people. She is talking with the A21 Campaign, Polaris Project, Not For Sale, and other anti-trafficking organizations in an effort to coordinate an awareness and fundraising event for January 2012. January is human trafficking month, and Rando hopes by then nail techs will have become more aware of the problem and be ready to work together to abolish slavery in salons.

The issue is a delicate one. It will take many nail tech-abolitionists to liberate the women being exploited, and it won’t come without vigilance and commitment. Consider a few roadblocks. First it’s difficult to identify victims. Though in plain sight, they are often overlooked. It’s in the open, people reason, it must be legal. This is a myth that keeps women enslaved in broad daylight — while clients get their nails done!  Rando wants nail techs and clients to recognize several common “red flags” that suggest a worker is enslaved. “I believe once people learn about the problem, we will get involved. Just like in the movement to ‘go green,’ it takes education to bring about change,” she says.

A second roadblock is that many victims won’t self-identify. According to Polaris Project, “Victims of human trafficking often do not seek help immediately, due to lack of trust, self-blame, or being directly trained by traffickers to distrust authorities.”

A third roadblock is the frustratingly inadequate oversight from local and state governments. No nail tech relishes the idea of her day being interrupted by a clipboard-carrying state worker poking around in the salon. However, one reason human trafficking can flourish in the nail industry is because business licenses are easy to obtain, and once the salon is open, it’s unlikely an inspector will visit the premises regularly. “I see a state inspector about every six years,” says Rando. “It’s time government officials start getting serious about the laws of slavery and bear down on this corruption.”

A fourth roadblock exists apart from the traffickers and the victims. It’s an internal roadblock, and one Rando says must be addressed if we are to make progress. It’s been described as a tension between “Asian” vs. “Caucasian” salons, or “traditional” vs. “discount” salons, or even “standard” and “non-standard” salons. There’s a split in the nail industry, and while signs point to improvement, there’s still a long way to go. Techs on both sides can agree on the basics: unlicensed, unsafe, unsanitary salons should not exist — regardless of the race and country of origin of the owner or nail tech. Further, both sides have strengths and weaknesses; we can learn from each other — whether it’s in regard to efficiency and speed or comfort and customer service. “We’ve got a real problem,” says Rando. “Traffickers are exploiting our industry to force women into modern-day slavery. Let’s work together to be their voice and their advocates.”

This doesn’t mean we turn a blind eye to violations in the nail industry. Just the opposite. It means learning to look for warning signs and being willing to get involved and report what we see. “One of the greatest weapons in the fight against trafficking is inquisitive neighbors,” says Elizabeth Keyes, attorney for Casa of Maryland, an immigrant-right organization. “We don’t like to be nosy, but the person is hoping against hope that someone asks so they can get help.”

Ultimately, Rando hopes to develop a way for techs to help restore the lives of the women rescued out of the slave trade. “I dream of the day when we can come alongside these women, restore their dignity, and help rebuild their lives by offering to train them so they have the skills to be independent,” says Rando. “I think it would be sweet justice to see women vindicated by succeeding in an industry that traffickers used to exploit them.”

> Is unpaid, paid very little, or paid only through tips

> Is not allowed breaks or suffers under unusual restrictions at work