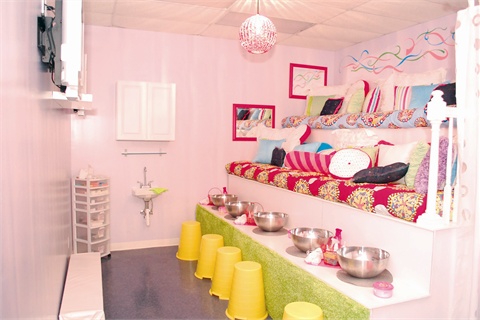 Owner Mishawn Hellams initially started the business as a mobile nail salon for the elderly in 2007 and it grew quickly over the next few years. After being nominated for a community service Hoodie Award from actor, comedian, and radio talk show host Steve Harvey in 2007 and 2008, she decided to look for a permanent location.

"After receiving the awards, the website went out of this world and most of my clients came from there," Hellams says. "From that point, I was able to build to what we have now."

A native of Washington, D.C., Hellams is a graduate of the Maryland Fame School of Nail Design, with over 20 years of experience as a nail technician. She is currently in the process of obtaining a Medical Nail Technician certification to expand the main day spa’s offerings.

Named for her daughters Rickia and Mahni, the RiMahni Glo Girls salon was created inside of the RiMahni Glo Day Spa to focus on natural nail care and fun activities for little girls.

Both are owned and managed by Mishawn Hellams and Kimberly Harris, in addition to the mobile salon that Hellams continues to offer for her loyal elderly clientele. The entire space is often transformed into one large salon for children’s mani/pedi birthday parties and spa parties for adults on the weekends.

Despite being located next door to an established salon, Hellams decided on the salon’s current location based on its position in a wealthy area full of new development. "It was more of a family area, the traffic was good, and the parking availability was great," she adds.

As expected, the RiMahni salons were not well received by the 5-year-old salon next door, sparking anger with the neighboring owners and nail technicians. However, after about nine months of disharmony, Hellams was finally able to smooth things over.

"I sat down with the owner and I explained to her, ‘You don’t have to worry about competition when it comes to nail enhancements because I won’t be offering them,’" Hellams says. "They see how cordial we are and for any type of nail enhancement, we’ll send clients there."

Using a concept created by one of Hellams’ young daughters, the team created a fun salon area for little girls that incorporates lots of girly touches and fresh design accents. "My daughter wanted theater seating with beds, so that’s what we did," Hellams says. "We made it where the lowest level would be where the pedicures would be done. The top level would be more for girls that were waiting for pedicures."

The Glo Girls salon features two main sections, a large pedicure area with two rows of theater-style seating and an adjacent nail bar off to the right with mini bar stool-style seating. Both areas were designed to accommodate the right height measurements and comfort level for children.

The lively pedicure area is full of sweet pinks, greens, yellows, and lots of vibrant prints on a great deal of the fabrics. A large array of multi-colored pillows are placed on each of the seating levels, giving the girls added cushions for lounging. A bright pink orb light adds a soft glow to the entire section, casting a pretty form of light and shadow thanks to the texture on the outside of the lamp. A safety railing is on the free end of the seating, as well as a divider curtain to add some definition to the spaces.

On the lowest level of the pedicure area are five silver pedicure bowls, always prepped to accommodate multiple girls or parent-and-daughter days at the salon. Cute swirled designs are painted on the back wall, complemented by two hot pink framed mirrors for the girls to admire themselves while waiting for pedicures. At standing level on the left side of the area, a small sink at a lowered height provides the girls with a kid-friendly space to wash up.

The nail bar is created with shining silver bars and a glass overlay for a modern look that shows off the polishes and manicure accessories. Cute pink and green accessories are featured on the bar and on the walls, giving the room a fresh look while retaining some of the style from the pedicure area. Four rows of small mirrors are placed on the right wall as a fun decor detail, along with two rows of crisp white kid-sized robes for spa guests.

The Glo Girls salon also features two flatscreen televisions and an Xbox video game console. The girls can play games while they wait, watch the Disney channel in between services, or bring their favorite movies from home to enjoy with their friends. The whole space is transformed every weekend for the large number of back-to-back Glo Girls party packages, often booked 45 days or more in advance.

Currently, Glo Girls offers manicures, pedicures, facials, nail art, and foil or rhinestone applications for nails. Polish brands used on the girls include OPI, China Glaze, and CND. To appeal to their little clients’ sweet teeth, salon services are all centered on different fruits and flavors.

Glo Girls clients are often referred through radio advertisements, word of mouth referrals, and the salon’s website, but many parents hear about the salon through Hellams’ other half.

"My husband is a Pop Warner youth football coach," she says. A lot of the parents and coaches from the sports teams and community-based youth associations that the Hellams’ are involved with are loyal clients to both salons. The waitlist for Glo Girls is about 30 days, and walk-ins are not permitted. The little salon sees about six to 12 girls a day from ages 3 through 12, not including all of the party packages that are scheduled every weekend.

"We have five different party packages to choose from," Hellams says. "We have a Pretty and Pink package, a Candy Girl package, a Cookies and Cream package, a Little Miss Princess package, and a Glo Girl Package."

The salon also offers different events and on-site activities every Saturday, including movies, face painting, canvas wall art painting, and a variety of different arts and crafts. One of the newer events, called Kitchen Kids, is led by local company Catering Compliments and shows children how to make fun, quick, and easy meals for themselves at home.

After a great year in 2009 and booming first half of 2010, business is beginning to slow down due to the economy, Hellams says. In addition, the cold weather in Maryland hasn’t helped, making pedicures requested much less than manicures at the girls’ salon as well as at the main day spa.

Still, she plans to move forward despite the slow season. Hellams is currently looking into opening two more RiMahni Glo Girls salons, one in Atlanta and another in Texas.